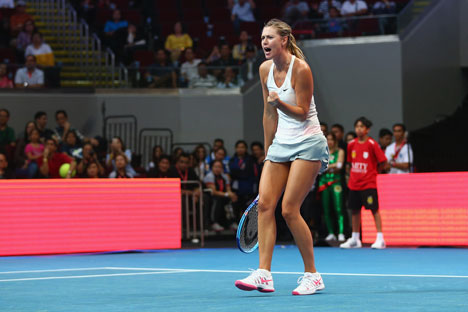 The dazzling arrival of figure skater Yulia Lipnitskaya, the victories of naturalized athletes, Daniil Kvyat's superb debut in Formula One, Maria Sharapova's successful return after injury: RBTH looks back on the Russian athletes who shone on the world stage in 2014.

The Russian KAMAZ-Master team's victories at the Dakar rally are no longer surprising. In the truck competition the team has been the one to beat for years now. This year the race was tight: The KAMAZ team, led by Andrei Karginov, was battling the Dutch Iveco team, led by Gerard de Rooy, until the very last minute. A great drama unfolded at the finish line: On the final stretch Karginov, who was leading, was forced to stop and help a Chinese SUV that was in an accident. Having lost precious minutes, Karginov let de Rooy drive past him and finished second. In the end the judges deducted the lost time from Karginov's overall result and the Russian driver deservedly won.

In February 2014, 16-year-old Yulia Lipnitskaya made the front pages of all the world's leading newspapers, having impeccably performed a program to the music of Schindler's List in the team competitions of the Sochi Winter Olympics. The girl in red was praised by the audience and by experts, and even by Steven Spielberg himself, who wrote Lipnitskaya a letter. Although the Russian team received a gold medal, the brightest star was surely Lipnitskaya. Unfortunately, the young athlete did not have enough poise to go through the tournament smoothly: In the individual competitions she made some errors and finished in fifth place.

In November, Lipnitskaya created a minor scandal by not appearing at the award ceremony of the Chinese Grand Prix, an event in which she had agreed to participate. But the figure skater says that she was overly nervous and just forgot about the event.

Victor Ahn, a naturalized Korean, proved capable of making half of Russia fall in love with him in just a few days last February. Ahn Hyun-Soo had come to Russia in 2011, after he could not make the South Korean national team due to an injury. Having already been a three-time Olympic champion, the Korean wanted to re-launch his career. Russian officials believed in the Asian athlete and was quickly given citizenship and an opportunity to practice with the Russian team.

In the end the results exceeded all expectations: In Sochi Ahn came in first in the 1,500- and 1,000-meter races and also played a decisive role in the Russian team's relay race win. Having learned Russian, the short track skater has adapted well to life in the country and has brought his wife to live with him in Moscow.

Just like Victor Ahn, American snowboarder Vic Wild came to the Russian national team in 2011. No one among the Russian fans had expected that exotic sports such as short track skating and snowboarding would bring Russia medals. Yet the 28-year old from White Salmon in the Washington State thrilled the Sochi public by winning two golds, in the Parallel Slalom and the Parallel Giant Slalom.

The snowboarder said that the Russian team had given him everything he needed to train (https://www.rbth.com//33517.html), whereas in the U.S. he had run into difficulties with financing. In the United States, while halfpipe and snowboard cross stars shine in the X-Games, making good prize money and receiving sponsorship contracts, slalom boarders remain with nothing. Wild's decision to take Russian citizenship was also influenced by his wife, Russian snowboarder Alena Zavarzina, who in Russia won bronze in the Parallel Giant Slalom.

Russia’s number one tennis star started the year with an injury, but had a good season and unexpectedly proved to be a strong fighter on clay: The victory at Roland Garros, as well as some other clay tournaments, demonstrated Sharapova’s all-round talent. However, she had to settle for less in the other Grand Slams: Each time she was bedeviled in the fourth round. In Australia, at the end of the first week she was stopped by Dominika Cibulkova; at Wimbledon, by Angelique Kerber; while at Flushing Meadows in the U.S. the Russian could not get past Caroline Wozniacki.

In the fall Sharapova's fans were happy to see her in good form during the Asian series and achieve victory at the China Open in Beijing. However, the final tournament in Singapore was not a success - Sharapova could got second place, behind the untouchable Serena Williams. By the way, the fact that the 2014 Grand Slam tournaments were won by four different players perhaps hints that next year Williams’ hegemony may be broken. And who, if not Sharapova, is capable of doing it?

Russia’s Formula One sensation: Such a resonant epithet is hardly an exaggeration for the 20-year-old native of Ufa, who in just one year has already made a name for himself in motor racing’s blue ribbon competition. At the beginning of the 2014 season hardly anyone would have expected that a debutante would accumulate points behind the wheel of the Toro Rosso car. However, Daniil Kvyat's perseverance and concentration helped him regularly make it into the top 10: The success of his debut in Australia was followed by other good performances in Malaysia and China.

Formula One’s big bosses recognize the Russian wunderkind's talent: Right before the Grand Prix in Sochi, Infiniti Red Bull Racing head Christian Horner invited his ward (Kvyat is a graduate of Red Bull's youth academy) to the main team, replacing four-time F1 champion Sebastian Vettel, who moved to Ferrari. Behind the wheel of a more powerful car Daniil will certainly have more opportunities and 2015 may become decisive in his career.