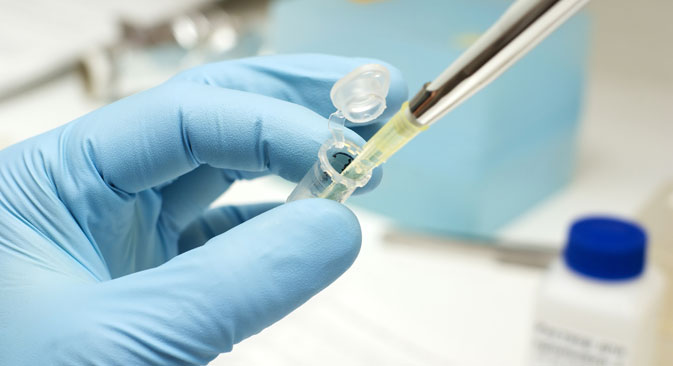 Nikita Kamaev: "We have all the documentation required to prove that Stepanova’s tests were conducted in accordance with WADA procedures." Source: PhotoXpress

In an exclusive interview with RBTH, the managing director of the Russian Anti-Doping Agency spoke about charges against the agency and Russian athletes.

Nikita Kamaev is Managing Director of the Russian Anti-Doping Agency (RUSADA). In December, a documentary was shown on German TV purporting to show evidence of a systemic culture of doping by Russian athletes and their trainers.

The film accused RUSADA of taking bribes and covering up positive results. More recently, RUSADA announced sanctions against five Russian race walkers, on the basis of irregularities detected by the International Association of Athletics Federations.

RUSADA has launched an official investigation into the accusations leveled by the German film, as well as a separate investigation into Russia’s race walking program, headed by coach Viktor Chegin. Kamaev spoke to Patrick Sewell of RBTH about the charges and the fight against doping.

RBTH: In January 2014, Patrick Shamash praised Russia’s anti-doping controls as “very effective.” What measures have been taken by RUSADA in the last few years to ensure this effectiveness?

Nikita Kamaev: Well first our thanks to Dr. Shamash for such an appraisal.  It should be stated from the outset that we work in strict adherence to WADA standards and national legislation to ensure our effectiveness.

Concerning RUSADA’s achievements in recent years, first there has been the provision of effective anti-doping monitoring for the 2014 Olympic Games in Sochi, where more than 90 percent of the anti-doping inspectors were from our agency.

RUSADA’s contribution was officially recognized by the Olympic Committee and WADA. Second, we are one of the few national agencies to regularly undergo ISO quality audits, and the last audit in November 2014 resulted in a highly favorable assessment of our internal processes.

N.K.: It is perfectly normal for the IOC and the WADA to monitor the host country’s national anti-doping laboratory particularly closely in the run up to an Olympic Games… The situation with the proposed suspension of the laboratory was not unique in international sport.

A thorough audit such as this will often find irregularities, but in the end all concerns raised of the laboratory’s technical and analytical procedures were dealt with to the IOC’s satisfaction. There have been similar cases such as this in Turkey, in the Philippines, in Brazil – there was nothing unusual in this.

RBTH: And was there nothing unusual in the accusations leveled against the head of the laboratory, Grigory Rodchenkov, in the documentary film Geheimsache Doping?

N.K.: Look, as regards the “documentary” film, if that’s what we want to call it, there are two things we need to consider. First there are the film’s alleged “facts” as to the use of performance enhancing drugs by Russian athletes and coaches, and second there are the allegations concerning RUSADA’s role… As for the accusations against Grigory Rodchenkov, I can’t comment on them, as they are currently being examined as part of RUSADA’s internal investigation.

RBTH: That’s understandable, but are you prepared to give your full confidence to Rodchenkov?

N.K.: It’s not a question of trust or love, such concepts are not in our professional vocabulary…

RBTH: …Well no, but surely there’s such a thing as professional confidence?

N.K.: Look, the lab headed by Rodchenkov has WADA accreditation, it has certificates required under Russian law… that’s enough for any National Anti-Doping Organization.

RBTH: And the “documents” presented in the film, of which you are so dismissive… Why shouldn’t genuine sound recordings and video count as evidence?

N.K.: On what grounds do you call the recordings genuine? Do you have expert analysis to prove it? Without such analysis we can’t determine how genuine the recordings were, whether they were modified, manipulated, but as part of our investigation we are consulting with experts from law enforcement who are authorised to conduct it.

RBTH: So in your opinion the recordings were falsified?

N.K.: I don’t have an opinion on this matter I judge only by facts. If there is a proven, documented and fixed infringement of the rules, that, for me, is a fact. The same goes for these recordings, which we are working on now to determine their authenticity.

RBTH: Well OK, if we are to talk about “real” documents, written documents, what of the email mentioned in the film that was sent to Yulia Stepanova, in which she is requested to pay for her testing? Seppelt claims this runs counter to WADA regulations, and furthermore that RUSADA has pointedly refused to confirm whether this email existed. Would you like to take this opportunity to respond?

N.K.: Seppelt always strives to demonstrate a thorough acquaintance with WADA’s Anti-Doping Code, but in this particular instance he shows not just ignorance of the relevant regulations but of the very principles on which the code is written.

In all the world it is accepted that the reinstatement testing required for an athlete to return to professional sport after a period of ineligibility should be paid for by the athlete, or by his or her sponsor. This is the standard procedure of any anti-doping agency, whether it be Russian, British or American.

We have all the documentation required to prove that Stepanova’s tests were conducted in accordance with WADA procedures. All the questions Seppelt asked me were given answers, and we have the minutes to prove it.

None of the alleged ‘facts’ included in his film withstand proper scrutiny. I repeat, either he is ignorant of the Anti-Doping Code, or he is intentionally and maliciously trying to spread disinformation.

RBTH: How is RUSADA cooperating with the WADA investigation [that was launched following the accusations of Geheimsache Doping] into its operations?

N.K.: Thus far we haven’t received any official requests from WADA. As soon as we do, we will respond as required. But, as far as I understand, the questions which formed the basis for the investigation are those, again, alleged ‘facts’ which are presented in Geheimsache Doping, and I can repeat, each of these ‘facts’ are simply lies, simply a fully conscious attempt to manipulate public opinion. Let him try to prove these apparent facts – they are no more than a cheap provocation.

RBTH: So do you still stand by your statement early in 2014 that: “In no way was or is Russia a distinctive doping nation?”

RBTH: Yes, but there are accusations that this percentage is artificially kept low by means of unnecessarily inflating the annual number of tests. After all, David Howman [WADA’s director general] has criticized the way in which RUSADA receives government funding in proportion to the number of tests conducted, thereby encouraging unnecessary testing…

N.K.: I don’t understand these accusations. RUSADA is, of course, a non-profit organization. After covering our expenses there is no money left at the end of the year. Yes, we receive money from the government, and even someone unacquainted with accountancy will understand that there needs to be some way of determining how much money is needed. It makes sense to base this figure on the number of tests that is conducted.

RBTH: OK, so 2.2 percent of positive results is not unusual for a national average, but what about another figure: 23 out of 37 of the athletes suspended as a result of irregularities detected by IAAF’s biological passport system since the programme launched in 2009 have been Russian. Is this not an unusual figure?

N.K.: No, because the number of Russian athletes competing in athletics events is so great.

RBTH: So great as to account for approximately two-thirds of the athletes suspended under the program?

N.K.: Yes, although it is a question not only of the number of athletes that take part, but also their success… In recent years Russian athletes have won a disproportionate number of medals, and athletes that obtain high positions are more closely monitored.

RBTH: Yes, but it is some of these most successful athletes that have been caught by the system, Olympic medalists, even gold medalists…

N.K.: Of course for fans and for journalists the more successful the athlete the greater scandal, but for the anti-doping processes in place its completely irrelevant. Take, for example, Lance Armstrong. Have you read Tyler Hamilton’s book [about doping in the Tour de France] The Secret Race?

N.K.: Well, there’s an interesting moment there. When Mr. Novitsky, the “bulldozer,” phoned Mr. Hamilton, and told him that the investigation he was leading into Armstrong had been unexpectedly dropped, Hamilton wondered whether maybe President Obama had got involved in order to quash any rumor of scandal in the run up to the London Olympics.

Stories like this are everywhere, and when people say that in Russia there is a corrupt system, I don’t see it. Cases such as that of the Chegin Training Center may appear cryptic of course, I don’t argue, but it’s still early, the investigation is still on.

It took the Americans almost three years to investigate the Armstrong case; with the Chegin Center case we’ve had only since April. Show me how it proves the existence of some all-pervasive corrupt system in Russia? There is no system.