Sharapova vs. Williams: opponents on the court and beyond 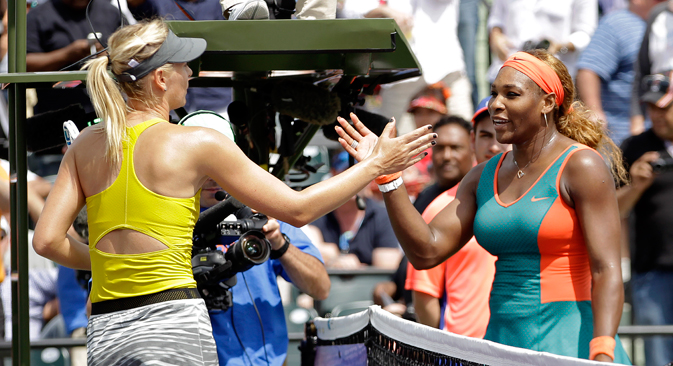 On Jan. 31 Russian Maria Sharapova once again took on Serena Williams in the final of a major tennis tournament. The 2015 Australian Open is already the ninth time that the two tennis players have met in a final, and women’s tennis today is unthinkable without the Sharapova-Williams duel - but the superstars compete not only on the court.

This year’s Australian Open final saw the latest instalment of one of modern tennis’s greatest rivalries – Maria Sharapova, the darling of Russian tennis, took on her arch-nemesis, the United States’ Serena Williams, for the ninth time in a final. Sharapova has frequently been frustrated by Williams in the past, but the competition between the two has not always been just about tennis.

Sharapova's star first rose on the tennis Olympus in July 2004. The 17-year-old sensationally made it to the Wimbledon final, where the more experienced Williams, at that time a six-time Grand Slam winner, was waiting for her. Specialists and bookmakers hurried to bet on the American. But that evening Sharapova was unstoppable.

The Russian won easily in two sets, stunning the whole sports world. Fox TV and NBC even interrupted their transmissions in order to report on the defeat of the legendary American tennis player. After winning the final point Sharapova fell to her knees and cried. Then she made her way through the cheering crowd to embrace her father, thanks to whom she had started playing tennis in the first place.

In her victory speech the Russian tennis player remembered all the difficulties that her family had had to endure for the sake of her career. With this victory Sharapova became the youngest Wimbledon champion and the first Russian to ever win on the grass of the All England Club.

Williams took her decisive revenge the following year. Both athletes had entered the semi-final of the 2005 Australian Open in great form and that match turned into a real thriller. Sharapova came very close to victory but the American broke two of her match points and won the match in three sets: 2-6, 7-5, 8-6. After the match Williams said that she had lost the 2004 Wimbledon final because of an injury. Due to this unfriendly interview, relations between the two tennis players soured.

After that strong-willed victory in Australia, the American won confidently every time she met Sharapova, regardless of what surface they were playing on. In the next two meetings - in the 2007 Australian Open final and the round-of-16 match of the Miami Masters - Williams crushed her opponent 6-1, 6-2 and 6-1, 6-1, respectively. After Miami many experts began saying that Sharapova experienced psychological problems whenever she entered a court with Williams.

Sharapova is not hiding the fact that she may end her professional career when she wins the Olympic Games. However, for now only one thing is in her way: Serena Williams.

During the last Olympics in London Sharapova was on course to win the gold medal: After confidently advancing to the final she was made the bookmakers' favorite. At that time Williams was not in her best form. The American had played the entire tournament with a hip injury and many thought that she would not make it to the final. Yet Sharapova lost hopelessly, winning only one game (6-1, 6-0).

After the match Williams admitted that she finds it very easy to play against Sharapova. The Russian did not respond to her opponent’s comments, but just said that silver is also a very dignified reward.

Williams and Sharapova's off-court relations are not particularly friendly either. On May 11, 2013 Sharapova admitted that she had been in a relationship with Bulgarian tennis player Grigor Dimitrov, Williams' former boyfriend. Obviously, the American was not very pleased with this turn of events.

"She begins every interview by saying 'I'm so happy,' but if she wants to live with a guy who has a black heart, fine, let it be," commented Williams about the private life of her colleague in a Rolling Stone interview. And although Sharapova’s name was not mentioned, everyone who follows tennis understood whom Williams was talking about.

But the American was not heartbroken for long and soon began a relationship with her French coach, Patrick Mouratoglou. Sharapova took advantage of the situation and responded to her rival in a press conference: "If Williams wants to speak about something personal, then she should speak about her boyfriend, who has children and who is getting divorced." Williams then buried the hatchet by apologizing to Sharapova for starting the conflict.