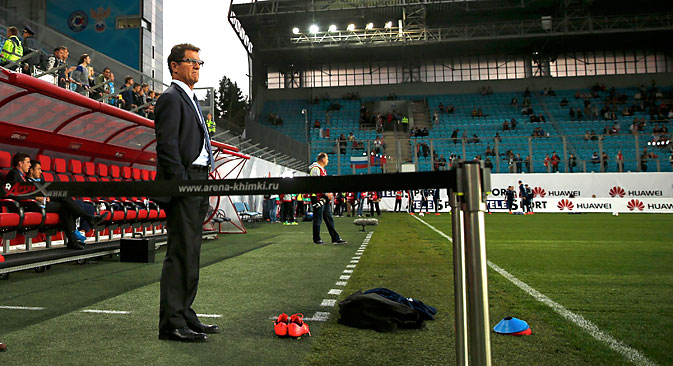 Russian billionaire Alisher Usmanov has pledged to pay the Russian Football Union’s (RFU) debt to national football coach Fabio Capello. Yet Usmanov’s $6-million band-aid falls far short of the kind of cash transfusion the RFU will need if it is to plug its hemorrhaging finances in time for the World Cup Russia is to host in 2018.

When Russian Sports Minister Vitaly Mutko told the R-Sport news agency on Feb. 5 that he was “appealing to businessmen” to finally resolve the scandal of national soccer coach Fabio Capello’s unpaid wages, his announcement was met with well-warranted skepticism on Twitter. After all, back in November 2014 Mutko had assured journalists from the same agency that Capello’s wages, which had remained unpaid since June, would be paid in full by the end of the year. The new year came and went, yet Capello remained out of pocket.

Yet this time Mutko was good to his word; later that same day Russian billionaire Alisher Usmanov, well known in the sporting world for his considerable stake at Arsenal, promised to extend a 400-million ruble ($6 million) loan to the Russian Football Union. Usmanov told R-Sport that the loan would come under the strict condition that it was used only to settle the Capello debt. It was also accompanied by a series of scathing recriminations in which Usmanov denounced the “absurd situation” at the RFU and cast doubts on the leadership of its president, Nikolai Tolstoi.

After Usmanov claimed his pound of flesh the scent of blood was too much for the Russian football elite. A feeding frenzy ensued with, among others, the presidents of the Lokomotiv Moscow and CSKA Moscow soccer clubs berating the RFU for its failure to pay Capello and its wider incapability of balancing the books. As the dust settled a familiarly Russian picture emerged.

First there was the standard fawning at the feet of those in authority. Vasily Mutko was praised for his supposed decisiveness, despite having dithered for over half a year, fully in the knowledge that the RFU lacked the funds to pay Capello but seemingly unable or unwilling to do anything about it. Alisher Usmanov was held up as a model of patriotic generosity, despite the fact that his intervention, a tiny fraction of his overall wealth, came in the form of a loan rather than a gift.

Then there was the excrement-storm of recrimination directed at the less powerful scapegoat, with the role in this case played by the unenviable Nikolai Tolstoi. There are said to be only two questions that matter in Russian politics, taken from the titles of two epoch-shaping novels of the 19th-century: Kto Vinovat? (Who Is Guilty?), and Chto Delat? (What Is to Be Done?) In this case the first answer is ‘Nikolai Tolstoi’, and the second (which is never really in question) is – “feed him to the dogs.”

Many in the Russian media added insult to the injury of unpaid wages by making Capello the victim of a similar witch hunt following Russia’s lackluster performance at the 2014 World Cup in Brazil. Yet while both Capello’s and Tolstoi’s careers at the commanding heights of Russian football have been far from free of error, their failures have been mostly the result of an institutional lack of resources beyond either man’s control.

Capello has been held back mainly by a lack of human resources, namely a lack of solid Russian talent in the key mid-twenties age bracket. Names like Alan Dzagoev and Alexander Kokorin are the exceptions which prove this rule, and even their careers have disappointed of late. According to at least one well-known Russian football analyst, Capello is struggling to cope with the shortage of talent resulting from Russia’s “missing generation.”

Tolstoi’s limitations are financial. Yet while the RFU has recently set up an ‘anti-crisis committee’ tasked with finding ways to cut spending, the organization’s real problem is not with expenditure but with income. Honorary RFU President Vyacheslav Koloskov last week explained this lack of income to R-Sport as the result of the “miserly” revenues obtained from matches during the UEFA qualifying season. This is a strange excuse for a rather obvious reason, namely that it is also UEFA qualifying season everywhere else in Europe.

The problem is why the RFU would need to rely on income from UEFA in the first place, and this is a problem of sponsorship. In fact, as Vasily Mutko demonstrated in the space of a few short hours on Feb. 5, this is a problem that could be easily resolved if the Russian Ministry of Sport really started facilitating sponsorship deals between wealthy donors and the RFU, rather than doing nothing to promote such deals or even, as has been suggested, blocking them in an effort to carry out the personal vendettas which sadly characterize relations between the Ministry of Sport and the RFU.

Neither external criticism nor its internal ‘anti-crisis committee’ is going to help the RFU plug the gap in its finances. And while R-Sport did quickly receive confirmation that Usmanov’s loan had been used to settle the RFU’s outstanding debts with Fabio Capello, the question of where the necessary funds to continue paying his $11-million-a-year salary until his contract ends in 2018 remains unanswered. As with many of the serious maladies currently plaguing the body politic of Russian football, this is a problem that has the potential to flare up any number of times in the run-up to Russia’s 2018 World Cup.

Read more: The footballers who fell for the charms of Russia’s women>>>