First male synchronized swimmer: ‘A mixed duet is the epitome of harmony’ 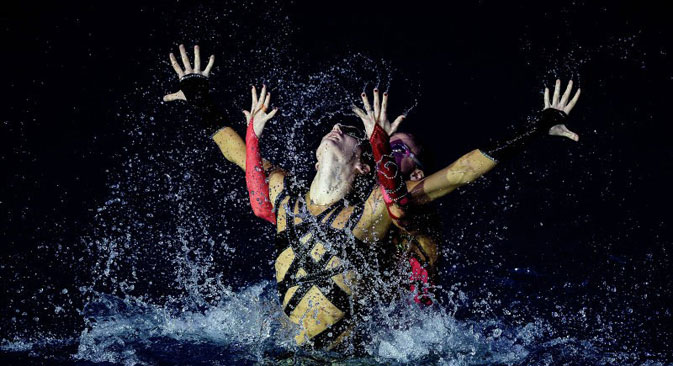 Alexander Maltsev will be the first man to represent Russia in mixed-gender synchronized swimming at the world championship in Kazan this summer. RBTH spoke to Maltsev to find out what led him to become a synchronized swimmer and how he feels about competing in a traditionally female sport.

Last year sawsomething ofa revolution take place in the world of synchronized swimming. On Nov. 29, 2014, a congress of the International Swimming Federation (FINA) in Doha voted to include mixed-gender events in its world championships. The decision met with mixed reaction, with three-time Olympic champion Natalya Ishchenko going so far as to say that she was “embarrassed to imagine what it will look like with men in.”

However, male synchronized swimmer Alexander Maltsev is undaunted by this skepticism. The Russian will become the first man from his nation to compete in the synchronized swimming world championship, to be held in Kazan on Jul. 29 - Aug. 9.

“When I was seven, my mother enrolled me in a synchronized swimming group at a local sports school,” Maltsev told RBTH. “At the time, they accepted everyone, boys and girls. My mother thought that this artistic sport would be good for my all-round development. And she was absolutely right.”

The swimmer’s ability, together with hard work, were quick to yield results: Maltsev was selected for the St. Petersburg municipal team at the age of just 10. The success did not go into his head; on the contrary, it only spurred him to improve further.

“Of course, when I was a small boy, I did not think of any prospects,” said Maltsev. “It’s just that I was good at almost everything that we did and I wanted to become better and achieve higher and higher results.

“At some point, I realized that I would not give up this sport in exchange for any other. It was then that I became convinced that there would come a time when I would be able to compete in official events. It helped me very much that despite some controversial reaction to what I was doing, there were always people close to me who supported me.”

‘The appearance of men in synchronized swimming is logical’

Internationally, Maltsev does not have that many competitors: He knows just a small number of fellow male synchronized swimmers. However, things are changing fast, and now that mixed-gender events have been included on the world championship program, the sport is sure to gain further popularity.

“The man, without a doubt, will complement the woman’s image, her grace, the lightness and smoothness of her movements with masculinity, temperament, elegance and athleticism. Men can perform very difficult strength elements, many of which are beyond the power of a female body. Also, lifts and throws will look more spectacular thanks to their height.”

A duet is born

Maltsev is a second-year university student and in future would like to train as a coach: The male synchronized swimming pioneer has ideas of his own as to how to move the sport forward. However, for the time being, he is totally focused on preparations for his debut at the world championship. He has already been paired up with Darina Valitova, a 2014 European champion in a team event.

“They are a great pair and I hope they have a great future ahead of them,” said the duet’s coach Gana Maximova.

“I am happy with how the work is going. We are concentrating on the present. As for the future, we shall see what happens next.”

Maltsev himself declined to share his expectations for the upcoming competition in Kazan. However, given Russia’s traditions in the sport, there can be no doubt that he is determined to win.

RBTH looks at games and disciplines old and new in which Russia excels.