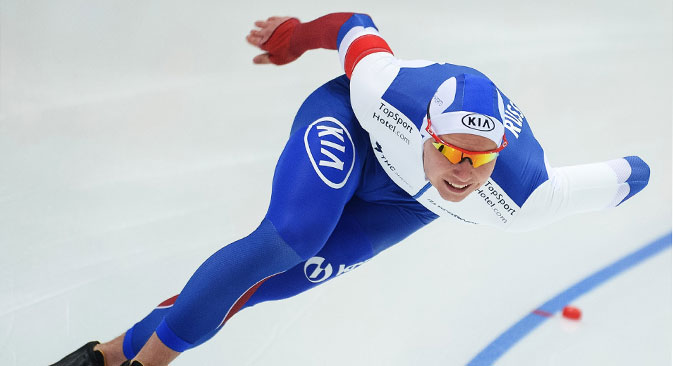 Skiers, snowboarders and skaters posted a number of impressive results in the first winter sports season after the Olympics.

In the first season after the Sochi Winter Olympics, Russia’s winter sports stars managed some notable victories, particularly in disciplines where the nation had not seen major successes in recent years.

Speed skater Pavel Kulizhnikov dominated his races on the speed skating World Cup circuit this season. Kulizhnikov first gained notice in 2012 when he won the gold medal in the 1,000 meter race and the bronze medal in the 500 meters at the World Junior Speed-Skating Championships in Japan.

However, he lost the medals after he failed a doping test. Following a two-year suspension, Kulizhnikov roared back this season. Russian Sports Minister Vitaly Mutko compared Kulizhnikov’s speed at the International Skating Union World Single-Distance Championship in February to that of Usain Bolt.

Mutko is sure that the money and effort put into Russia’s winter sports teams before the Olympics is still bearing fruit. "Interim results suggest that that the victory of the Russian team at the Games in Sochi was foreseeable. We continue to form a system of preparing reservists for the national team. And a potential of our reserve is very high," Mutko said, according to a statement posted on the website of the Russian Ministry of Sports.

Ivan Skobrev, who won two speed skating medals at the 2010 Olympic Winter Games in Vancouver, agrees with Mutko’s assessment. ”Not only Pavel Kulizhnikov, but all our current men's speed skating team looks very cool,” Skobrev said. “This is due not only to the coach. This is the result of a competent state policy. With an eye to the Olympics in Sochi, we got excellent rinks in Kolomna, Krylatskoye and Chelyabinsk.”

Svetlana Zhurova, a gold medalist in the 500 meters speed skating event at the 2006 Turin Games and a current State Duma deputy from the United Russia party is also sure that Kulizhnikov benefits from the investment the state made in his hometown. “The first reason for Kulizhnikov's success is that the guy is from Kolomna, one of the major skating centers in the country,” Zhurova said. “If we talk about the upcoming Olympics in Pyeongchang, there are some hopes. Those young guys who were prepared as a reserve team for the Sochi Games will come into full force.”

Speed skating was not the only discipline in which Russians found a way to shine this winter. In skiing, Alexander Khoroshilov. 31 took the top place in the slalom at the at the World Cup event in Schladming, Austria on Jan. 27. It was the best finish for a Russian skier since 1981.

In luge, Semyon Pavlichenko, 23, won the world champion event in Latvia on Feb. 2. It was the first time a Russian luger had won gold at a World Championship. The only Soviet champion was Sergei Danilin, who won gold in 1981.

Snowboarder Andrei Sobolev. 25 became the world champion in parallel giant slalom after a competition in Kreischberg, Austria, on Jan 23. It was the first victory for a Russian snowboarder in a World Cup event. Previously, the best result among men at the World Cup was the bronze won by American-born Russian snowboarder Vic Wild in 2013.