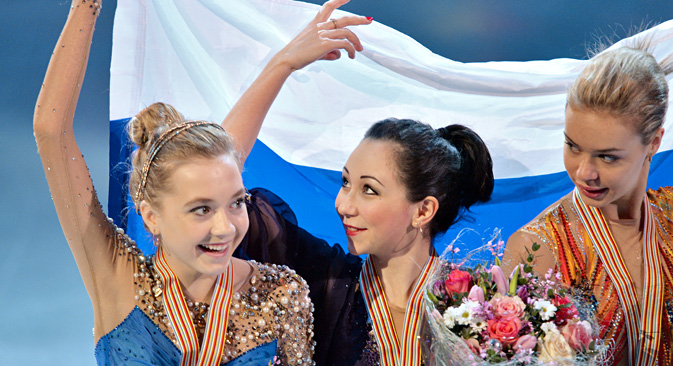 Young female Russian figure skaters are now winning international competitions while still in their teens. Sochi Olympic champion Adelina Sotnikova ascended the podium when she was 17; Yulia Lipnitskaya won the gold medal in the team competition of the Olympics at the age of 15. RBTH finds out how these young stars are raised to become champions.

It was only a year ago that Adelina Sotnikova and Yuliya Lipnitskaya were bathing in the glow of Olympic triumph at Sochi, having won figure-skating gold for their country at the ages of just 17 and 15, respectively.

Yet already Sotnikova and Lipnitskaya have been pushed from the limelight, defeated at the Russian championships by a fresh wave of young stars who turned the distribution of medals at the first major international tournament in 2015 – the European Figure Skating Championships – into an exclusively Russian affair.

Two of the winners are in their teens: Anna Pogorilaya and Yelena Radionova are both 16. The European champion, Yelizaveta Tuktamysheva, is older, but she won her first medal at the adult Russian Championships when she was only 12.

According to coaches, young skaters differ from adults: They are more flexible, less inhibited by fear and do not carry the weight of past victories on their shoulders, while youthful fervor adds to their desire to set records.

However, for some reason this phenomenon does not affect the other leaders in women's figure skating, the U.S. and Japan, as much as Russia. The difference could lie in parental ambitions.

"Our parents often have the goal of winning medals when they bring their children in for figure skating," said Alexei Urmanov, a 1994 Lillehammer Olympic champion and now a coach.

“Of course, children are selected to pursue sports in both the U.S. and Europe as well. But there is nothing remotely similar to what we have here. In this country, the competition – even on the children's level – is greater than anywhere else in the world."

Adelina Sotnikova was brought to Moscow’s Yuzhny skating rink by her mother when she was four. Within three years, Sotnikova was training at CSKA (Central Sport Club of the Army), under the tutelage of renowned coach Stanislav Zhuk.

Having won gold in Sochi, Sotnikova almost decided to end her skating career to go to study at the Theater Institute. But she has a sister in need of expensive medical treatment, and it is mainly Sotnikova who will have to earn money for this treatment.

Liza Tuktamysheva first went to the skating rink in the Udmurt town of Glazov at the age of five. For five years, she was taken 1,600 km to St. Petersburg to work with coach Alexei Mishin, who trained Olympic champion Evgeni Plushenko. As a result, her parents eventually decided to move to the northern capital.

Judging by the members of the Russian national figure-skating team, it is mostly three schools that take skaters to the international level – CSKA Moscow, Sambo 70, and the Dynamo sports school in St. Petersburg.

Everything is concentrated in these two cities: most of the rinks designed for figure skating, qualified coaches, precise selection systems and the structure of competitions, the most gifted children and the most enthusiastic parents keen on making their child into a skater.

This combination of conditions has allowed Russia to set up an effectively full-scale production line of young skaters with the highest level of technical training. This could push the sport along the path already trodden, for example, by women's gymnastics, where a 20-year-old female athlete is a veteran.

According to Alexei Urmanov, television is interested in the eye-catching performances that young skaters are likely to deliver.

Yelena Buyanova, who performed under the surname Vodorezova, made her entry onto the Olympic ice at Innsbruck in1976 when she was just 12. Adelina Sotnikova is Buyanova's student.

"Every age has its charms," said Buyanova. "Sotnikova and Tuktamysheva really raised [the profile of] figure skating, when they were just at the beginning of their careers. They showed that they could perform complex stunts, and Russian coaches began to introduce these stunts into children's skating."

For example, the success of Tuktamysheva at the European Championships is down to the fact that she mastered difficult jumps when she was only 13.

The other winners of the European Championship are on the same path. "I'll note that the higher the base mastered in childhood, the more prepared the athlete is for making further improvements, but those who remain at that level after they grow up are few," said Buyanova.

Want to be a skating star? Start at an early age

The examples of Sotnikova and Tuktamysheva show that, to count on a serious career in Russia, a girl should be brought into figure skating at the age of four or five – no later.

Between seven and 10, a talent may get noticed by one of the coaches of the top schools. Having reached national competition level, young athletes devote six to eight hours a day to their sport, and sometimes even more.

A two-time junior world champion and adult medalist of the 2015 European Championships, Yelena Radionova, told the press that she went to primary school regularly, but later had to switch to homeschooling; she studied according to individual curriculum attending only classes in principal subjects.

When preparing for the final state examination at the ninth grade, Yulia Lipnitskaya studied a lot with private tutors, allocating one week for each subject under a special program.