From the Spartakiad to Sochi: Immortalizing Russian sports in postage stamps 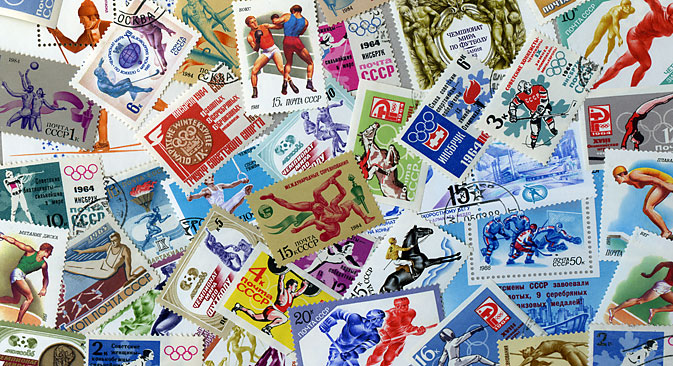 In August, Russian Post is to release the first of several sets of special stamps commemorating the upcoming 2018 FIFA World Cup in Russia. Over the years, sports and sporting scenes have often been a source of inspiration for both Soviet and Russian stamp designers. RBTH finds out which Russian sports and sporting events have been selected for representation on stamps over the years.

In August 2015, Russian Post will release the first of several sets of special postage stamps designed to commemorate the upcoming 2018 FIFA World Cup, which will be hosted by Russia. Over the years, sports and sporting scenes have inspired both Soviet and Russian stamp designers to create numerous memorable sets, from celebrations of sporting tournaments and female athletes to Russia’s very first Formula One Grand Prix. Many of these have now become coveted by stamp collectors.

Spartakiad 1936: A memoir of a failed tournament

A sports scene on a Soviet stamp first appeared in 1935 for the 1936 World Spartakiad, which was conceived as a counterweight to the bourgeois Olympic Games.

In the magazine Soviet Collector, readers offered their ideas of images for the epochal event for the USSR: "100-meter runners near the finish line: The red one with a star on his shirt and the black one with a Nazi swastika. The red one is ahead of the black one," "Skijoring [horse-skiing]. On the skis – a soldier, athlete, leading fighter of the Red Army," "A sportswoman shooting at a target with a gun. Shoot straight at our internal and external enemies with a Bolshevik word, as if from a gun."

A stamp dedicated to the Spartakiad 1936. Source: Press Photo

Ultimately, the Spartakiad did not take place, leaving only "orphaned" stamps in history. But the proletarian "counterweight" – for example, on the stamp with rowers – was copied from the photograph of traditional races between Cambridge and Oxford universities on the Thames in London.

From 1938 onward, sports became a permanent fixture on Soviet stamps: The sets "Sports in the USSR" and "Ready for Labor and Defense," which duplicated images of military skiers and athletes at parades, were released that year.

In 1949, the stamp "Women in Sports" was issued ahead of International Women's Day on March 8.

In 1957, sports collectors received a gift – the Soviet Union released the world's first set of stamps dedicated to ice hockey in the run-up for the 23rd World Championship.

A stamp dedicated to the Winter Olympics in Grenoble, 1967. Source: Press Photo

Later, in 1967, ahead of the Winter Olympics in Grenoble, a small series dedicated to only four of the 10 sports represented at the Games was released. Subsequently, in each of them – hockey, ski jumping, figure skating, cross country skiing – Soviet athletes took first and podium places, while Vladimir Belousov became the first and so far only Olympic ski-jumping champion in the history of the USSR and Russia.

The largest Soviet editions of sports stamps to date were dedicated to the 1980 Olympic Games in Moscow and the 2014 Olympics in Sochi.

A stamp dedicated to the 1980 Olympic Games in Moscow. Source: Press Photo

Promotional campaigns for both began two or three years before the event. For the 1980 Olympics, a surcharge was added to the regular price on stamps – for example, 4+2, 6+3, or 10+5 kopeks – which, as at the very first Olympic Games in Athens, went toward covering the costs of the games.

A stamp dedicated to the 2014 Olympics in Sochi. Source: Press Photo

Several high-circulation series of stamps were issued for the 2014 Olympic Games in Sochi: the Games mascots, medals, various sports, Olympic stadiums, the Olympic torch relay, Russian winter sports legends, hiking in the vicinity of Sochi and even a stamp with a QR code.

A stamp dedicated to the 2014 Olympics in Sochi with QR code. Source: Press Photo

Moreover, for the first time in world Olympic official philately, the official stamps of the host country were released in six languages.

Games of the peoples of Russia, the clay from a tennis court and Formula 1

Over the years, various interesting releases have enriched Russian philately. For example, sets commemorating the Goodwill Games in St. Petersburg in 1994 and the "50 Years of Domestic Hockey" series in 1996. 1999 saw the release of a unique series titled "Sports Games of the Peoples of Russia,” which featured stamps depicting the equestrian competitions of steppe peoples, Tatar kuryash wrestling, reindeer race sledding, and weight-lifting.

In recent years, more unusual sets of stamps have been released around the world featuring the smells of chocolate, wood or even ceramics. In 2002, on the occasion of Russia’s tennis players’ first ever victory in the Davis Cup, stamps with the image of the cup embossed in silver came out, where real clay from the court in Paris, which hosted the final matches between Russia and France, was affixed to the image in place of the tennis court.

A stamp dedicated to the Formula One racing in Sochi, 2014. Source: Press Photo

The arrival of Formula One racing in Russia in October 2014 was a great event for Russian fans, and naturally was accompanied by a stamp, which was officially released into circulation on the day of the race in Sochi. The post office closest to the Olympic Park held a special ceremony to cancel the very first stamp, which featured a special postmark with the day’s date.