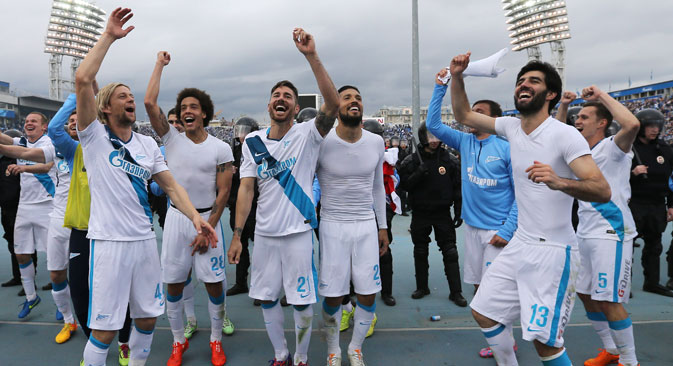 F.C. Zenit St. Petersburg, the new Russian soccer league champions, has embarked on a lavish spending spree over the last few years, but the hefty investments in star players and coaches have not brought the desired results in the Champions League, despite a number of domestic titles. Analysts blame poor recruitment and management policies for the club’s struggles in its attempts to become one of Europe’s footballing powers.

Soccer club F.C. Zenit St. Petersburg became 2015 Russian champions for the first time since 2012 on May 17, drawing 1-1 with F.C. Ufa to seal the title with two matches to spare as its lavish spending spree of recent years finally paid off.

Intrigue was minimal during the course of the season: Zenit led the table from the very start of the season and won the key matches against its main rivals – CSKA Moscow, Krasnodar and Dynamo Moscow.

Shopping on a grand scale

The transformation of the club from sleeping giant to domestic hegemon can be traced back to 2006, when Russian gas giant Gazprom became full owner of the club. In early 2007, the transfer market exploded when Zenit bought Ukraine captain Anatoly Tymoshchuk from Shakhtar Donetsk for what was then a record fee in Russia - $20 million.

In August 2008, Zenit broke its own record by paying Moscow's Dynamo 30 million euros for the Portuguese attacking midfielder Daniel Miguel Alves Gomes, known as Danny. But the event that really grabbed the headlines was the double transfer of Brazilian striker Hulk from F.C. Porto and Belgian midfielder Axel Witsel from Benfica in the summer of 2012. According to official information, Zenit paid 40 million euros for each, but some media sources claimed that Hulk cost the club a staggering 60 million euros.

Why did the club go into such huge costs? Reigning in Russia, Zenit could not reach success in European competitions.

Nonetheless, this extraordinary spending spree did not bring instant results. Paradoxically, after the transfer of Witsel and Hulk, Zenit failed to win the championship, finishing second in the league behind CSKA Moscow. Neither did the new star players manage to take the club into the last 16 of the Champions League.

One of the reasons for the failure was the internal conflict that arose in the team over the dissatisfaction of a number of Russian players with the astronomical salaries being paid to the new foreign signings. Midfielder Igor Denisov created a media storm by publically criticizing the club’s policy, before eventually leaving the team.

Despite the departure of Denisov, the situation continued to deteriorate in the 2013-14 season. The team’s then-coach, Italian Luciano Spalletti, lost control of the team, and after Zenit conceded the title to CSKA Moscow once again, was dismissed.

He was replaced by the Portuguese André Villas-Boas, who made his name with F.C. Porto, where he achieved a treble, winning the domestic league title, then the Portuguese Cup and the UEFA Europa League. However, Villas-Boas struggled with his subsequent managerial posts in England with Chelsea and Tottenham, where he appeared to have difficulty implementing his ideas.

In the summer of 2014, Zenit bought two more top-class players. Argentinian defender Ezequiel Garay left Benfica to join the St. Petersburg club for 6 million euros, and Zenit bosses forked out another 15 million euros for the transfer of Spanish defensive midfielder Javi García from Manchester City. With such an array of talent now at its disposal, the team finally managed to regain the Russian title this season.

However, in spite of the league titles the club has won in the last few years, fans continue to be frustrated by the team’s failure to make significant inroads in Europe. Back in 2008 the club looked set to become a leading European football power after winning the UEFA Cup and European Super Cup under Dutchman Dick Advocaat, but since then Zenit has flattered to deceive, only once reaching the knockout stage of the Champions League despite becoming group stage regulars.

This season proved no exception, with the St. Petersburg outfit able to finish only third in an unchallenging Champions League group, and subsequently progressing no further than the quarter-finals of the Europa League, into which third-place teams from the Champions League group stage are transferred.

So far, despite all the hype, the large investments are paying off for Zenit only at home.

Experts interviewed by RBTH are split over the reasons for the club’s slow progress. Former Zenit player and coach Alexei Strepetov believes that despite the big-name signings, the team is short of strong players. According to Strepetov, Zenit has five or six top players, but in order to achieve success in the Champions League, this is insufficient – top teams boast quality right through the squad.

Zenit is also limited by UEFA’s financial fair play regulations, and is forced to work under the limit on foreign players effective in Russia (up to seven players are currently allowed to play in a Russian team, but legislation is now being prepared to reduce this number). So now no loud purchases are made. Goalkeeper Yury Lodygin, who was found in Greece (he is of mixed parentage) and who moved to Zenit for a fee of just 800,000 euros, is a good example of the benefits of scouting for promising and low-cost players.

Zenit’s former sports director Konstantin Sarsaniya, however, sees the cause of the team’s failure to capitalize on its financial muscle as lying in mediocre coaching.

“I do not understand what Villas-Boas wants from the players,” said Sarsaniya in an interview with RBTH. “Everything is based on the individual qualities of the players, and I can say that Zenit is playing below its potential.”

Bournemouth's Russian member of the board: 'It's not money that takes the field'