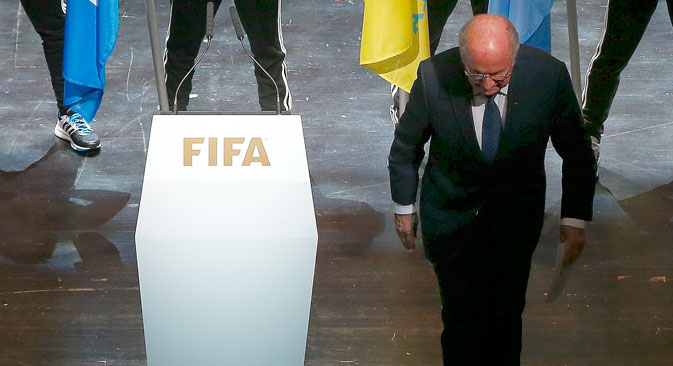 FIFA President Sepp Blatter leaves the stage after making a speech during the opening ceremony of the 65th FIFA Congress in Zurich, Switzerland, May 28, 2015. Source: Reuters

A number of high-profile arrests in the upper echelons of international soccer organization FIFA at the request of the U.S., as well as the opening of a Swiss investigation into the bidding process for the 2018 and 2022 World Cups in Russia and Qatar, have raised concerns about the future of world football, as well as the fate of the upcoming tournaments.

The soccer world is currently reeling after the sport’s global governing body FIFA (Fédération Internationale de Football Association) has become embroiled in a massive corruption scandal that could have far-reaching implications for the 2018 and 2022 World Cups in Russia and Qatar, as well as the future of the tournament itself.

On May 27, Swiss police in Zurich, at the request of the U.S. government, arrested seven high-ranking FIFA officials, including two of the organization's vice presidents, Jeffrey Webb and Eugenio Figueredo. Since then, seven more individuals have been detained, bringing the total number of arrested to 14. The U.S. authorities suspect those detained of having carried out racketeering, fraud and money laundering on a huge scale in the course of the last 24 years.

The authorities also suspect representatives of the sports mass media and promotion groups, who allegedly paid FIFA representatives a total of more than $100 million in bribes in exchange for marketing and sponsorship rights for U.S. territories. According to the investigation, the illegal payments were made in U.S. dollars through American banks, which gives the United States jurisdiction in the case.

The arrests took place two days before the FIFA presidential elections on May 29, though the list of those arrested does not contain the name of FIFA's current president, the 79-year-old Swiss, Joseph "Sepp" Blatter, who is running for his fifth term and – despite the scandal – is considered odds-on to win the contest, in which his chief rival is Prince Ali bin Hussein of Jordan.

Blatter determined to stay on

Leading Russian soccer expert and candidate for the Russian Football Union Alisher Aminov sees the proceedings as a clear threat to Blatter, whose position had previously been secure, despite a mounting wave of corruption allegations in the last few years.

"The stability of the Blatter regime is based on his generosity to dozens of third-world countries," says Aminov. "He allots a substantial amount of sponsor funds to local federations and they support him during the elections. Corruption is nothing new to the third world and as long as Blatter can resist American pressure he can be sure to have Africa's backing. A vote from a country like Mali is currently equal to that of England."

Aminov believes that the sponsors' possible refusal to collaborate with FIFA – Coca-Cola and Visa have already issued statements expressing their concern – may play a key role in the affair.

"If major sponsors decide to leave, the situation will radically change. Without generous funding the Africans' sentiment towards Blatter could seriously wane. And without their support he will have lots of difficulties with the Americans and the Europeans, who have been trying to undermine the FIFA chief for a while,” said Aminov.

Blatter has come under increasing pressure to resign in recent years following a string of high-profile corruption allegations against FIFA officials, one of which saw former vice president Jack Warner (also arrested as part of the current investigation) forced to resign.

Soccer’s European governing body UEFA has also been pressuring Blatter over the latest scandal. Michel Platini, President of the Union of European Football Associations, is demanding "a reset" in FIFA's work and has called on Blatter to leave his post, saying he is “disgusted” by the scandal.

Will Russia keep the World Cup?

The current scandal has also cast a shadow over Russia, with a number of high-ranking politicians and soccer officials, including UK Prime Minister David Cameron, the new president of the Ukrainian Football Federation Andrei Pavelko and ex-UEFA President Lennart Johansson, expressing their disappointment that there were no Russians and Qataris on the list of suspects.

Russia and Qatar are hosting the 2018 and 2022 World Cups, respectively – both of which have been tainted by widespread allegations of fraud during the bidding process. However, the trail may yet lead in the direction of Moscow and Doha – hours after the arrests in Zurich, Swiss officials announced that they were opening an investigation into the awarding of the hosting rights for the two tournaments.

For now, though, FIFA's Director of Communications & Public Affairs Walter De Gregorio has announced that everything remains as before: The 2018 World Cup will be held in Russia and the 2022 World Cup in Qatar.

Meanwhile, as prominent figures in the soccer world and media in Europe, Latin America and Australia united in their calls for Blatter to resign over the corruption scandal, Russian President Vladimir Putin defended the Swiss, claiming instead that the U.S. is only trying to prevent the FIFA president’s re-election.

Representative of the U.S. State Department Jeff Rathke sidestepped Putin’s accusation, saying that the charges against the FIFA officials, some of whom are American citizens, were being brought solely on the basis of criminal activity. “That’s not what we’ve done, that’s not what we’re doing,” said Rathke. “The basis for charges is clear.”

According to Valery Chukhry, former director of FIFA's Moscow bureau, Russia is in no danger of losing its right to hold the 2018 World Cup.

"FIFA's corruption inquiry is not the first of its kind," says Chukhry, who drew a comparison between the case and criminal cases launched in the U.S. against the organizers of the 2002 Winter Olympics in Salt Lake City and the 1996 Summer Olympics in Atlanta, which were also tainted by accusations of bribery.

“FIFA will survive this latest corruption scandal without any upheavals,” says Chukhry. “No one's right to organize such an event has been revoked yet. I think it will be the same now. FIFA will just reshuffle its ranks, Blatter will hold onto his post and Russia and Qatar can calmly prepare for the World Cups.” 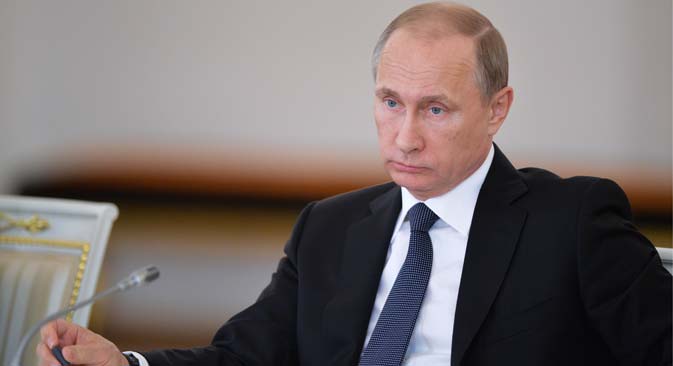 Read more: FIFA arrests are U.S. attempt to extend its jurisdiction to other states, says Putin