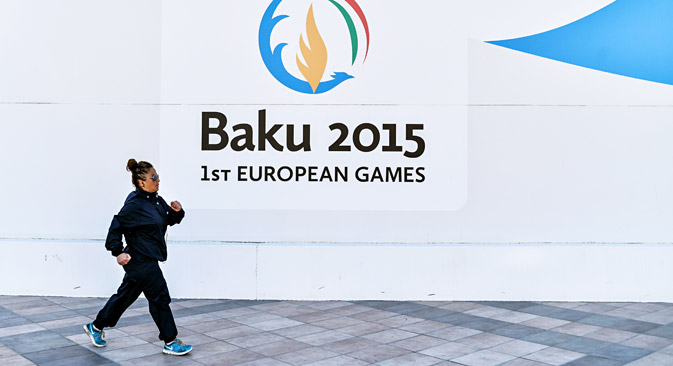 The first European Games in history will take place in the Azerbaijani capital between June 12 and 28. RBTH finds out what we can expect from Russia’s athletes in the inaugural event and asks if the European Games is capable of repeating the success of the Asian Games.

On June 12 the curtain will go up on the first ever European Games, to be held in the Azerbaijani capital of Baku. The competition, which will be overseen by the European Olympic Committees, will see athletes competing for 253 medals in 20 different sports, many of which are also Olympic events.

Other continents and regions already have similar competitions: In 2011 the 16th Pan-American Games were held in Mexico, the 7th Pan-Arabic Games in Qatar, the 10th All-African Games in Mozambique, while in 2010 the Asian Games took place in China.

The European Games will be held every four years.

Russia is taking the new competition very seriously. One of the reasons is that the Games' opening ceremony, which will take place on the Russia Day national holiday on June 12, will be attended by President Vladimir Putin.

President of the Russian Olympic Committee Alexander Zhukov has said that the national team is aiming to top the gold medal table. The standard-bearer for the Russian team will be Olympic wrestling champion Khadzhimurat Gatsalov.

Russian fans have high expectations for the beach soccer tournament (Russia’s players have won the world championship twice: in 2011 and 2013) and the individual competition in artistic gymnastics, where Russia will be represented by the main contenders for the gold in Rio 2016: eight-time world champion Yana Kudryavtseva and Margarita Mamun (five-time world champion).

"Our attitude towards the Games is more than serious,” says Zaripova. “Also, the European Games will be inaugurated in Baku, so we want to be the first at the first games."

However, the European Games will not be able to boast the presence of world stars in the water sports and track and field, two of the most spectacular and popular disciplines. The leaders in these sports have decided instead to concentrate on the more prestigious World Championships. The 2015 World Aquatics Championships will take place in the Russian city of Kazan between July 24 and August 16, while the best track and field athletes will be competing in the world championships in Beijing between August 22 and 30.

Following in the footsteps of the Asian Games

The main question that experts and observers are asking on the eve of the ceremony is whether the European Games repeat the sporting and commercial success of the Asian Games. In the opinion of Vitaly Smirnov, who has been a member of the International Olympic Committee since 1971, the European Games have a big future.

While Smirnov concedes that spectators in Baku will not be able to see the European elite in the water disciplines and track and field events, by 2019 this issue “will have been resolved,” he says. “There were many interesting applications to host the second Games. When there is healthy competition, it means that there is interest in the European Games."

However, the run-up to the Games in Baku is already in danger of being overshadowed by a focus on Azerbaijan’s poor human rights record. A number of media organizations and journalists who have previously criticized the authoritarian regime in the country have been denied entry to cover the European Games, including British newspaper The Guardian.

According to Human Rights Watch, “the worst crackdown the country has seen in the post-Soviet era” has taken place during the preparations for the European Games, with at least 35 human rights activists, journalists and critics being prosecuted or imprisoned on trumped-up charges.