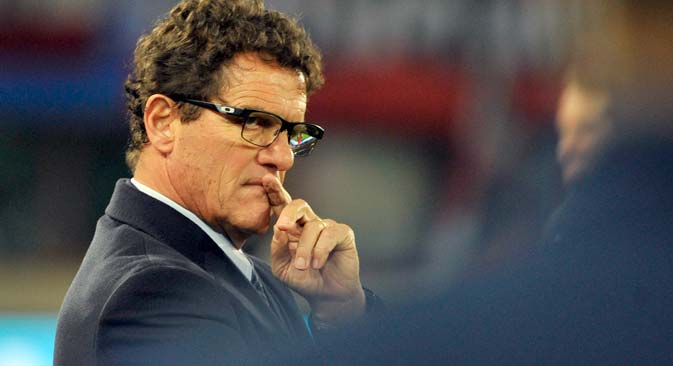 With Russia’s chances of qualifying for next year’s European Championship in France currently in the balance after a string of dismal performances, the heat has been turned up on coach Fabio Capello, with Sports Minister Vitaly Mutko saying that the Italian’s dismissal has already been decided. Capello is the third high-profile manager in a row to coach the team, an expensive gamble that many see as having failed to pay off.

Fabio Capello's future as the coach of the Russian national soccer team is currently hanging from a thread. After Russia's humiliating defeat to Austria (0-1) in a recent Euro 2016 qualifying match, the rumors of the 69-year-old Italian's imminent dismissal have reached fever pitch, with Russian mass media turning openly hostile in the last few weeks.

Head of the Presidential Administration Sergei Ivanov labeled the Russian team's last performance "wretched," while Sports Minister Vitaly Mutko has said that the question of the renowned coach's dismissal has been "decided."

Russia currently sits third in Group G with 8 points, 4 adrift of Sweden and 8 behind pacesetters Austria. The top two teams will qualify automatically for next year’s tournament in France, while the team finishing third is likely to end up in a play-off against a third-place team from another group in order to qualify – making qualification far from a foregone conclusion for Capello’s men.

The official decision to dismiss Capello was supposed to be made on June 24 during the session of the Russian Football Union's Executive Committee. However, for now Capello remains in his post, and the committee made it clear that the issue may remain unresolved until the election of the union's new president, which will take place on September 2.

The stumbling block consists of the financial conditions stipulated in Capello's contract, which expires in 2018. According to a penalty clause in the agreement, if Russia annuls the contract it has to pay the coach the sum total of his remaining salary until 2018.

Capello's annual income, according to unofficial information, is seven million euros. The newspaper Sport Express has reported that Capello spoke with Sports Minister Vitaly Mutko on June 25 about the possible reduction of his compensation in the event the contract is annuled prematurely.

Fabio Capello was appointed head coach of the Russian national team on July 26, 2012. His main achievement in the three years he has been at the helm was the team's qualification for the 2014 World Cup, a first in 12 years. During qualification Capello's boys even beat Portugal, led by Cristiano Ronaldo.

But afterwards Capello's career went sour. Russia's early exit from the tournament after failing to get out of one of the weakest groups (Russia’s rivals were Belgium, Algeria and South Korea) and its subsequent dismal performance in qualifying for Euro 2016 did not help the Italian's popularity rating. He was accused of fanatically rotating players and a weak attack strategy. "Never has the Russian national team looked so helpless," admitted former captain of the Russian national team Alexander Mostovoi after the match with Austria.

Hiddink's successor Dick Advocaat – another Dutchman – is remembered principally for the team's performance in the European Championship in 2012. The former coach of Zenit St. Petersburg successfully led Russia through qualification and began the tournament by thrashing the Czech Republic 4-1. However, in the end Russia did not make it to the knockout stage: a 0-1 loss to Greece ended Advocaat's tenure as Russia's coach and Sergei Fursenko's presidency of the Russian Football Union.

All three foreign coaches have received the same annual salary: seven million euros. However, Capello became the first coach to have his salary paid directly by the football union.

Hiddink's salary was paid by Roman Abramovich through a special foundation called the National Football Academy and Advocaat was paid by Gazprom, where Fursenko had been a senior manager. In the last year Capello has encountered delays in payments due to the union's inability to find sufficient resources to pay his salary. In the end, a significant portion of the Italian's salary was covered by billionaire Alisher Usmanov, who transferred two whole tranches to the union.

‘Expensive pensioner’ or hostage to the situation?

Experts are divided in their evaluation of the Russian stage of Capello's career. According to Viktor Ponedelnik, who played in the Soviet team that won Euro 1960, the results of Capello's invitation to Russia should sober up Russian officials.

"Capello's arrival destroyed the illusion that a meritorious coach can make a strong team out of any players,” said Ponedelnik. “Once again Russia gambled not on the development of young players but on a famous coach, who happens to be at the end of his career. Capello has become an expensive pensioner. With such a weak generation of players and with the coach's high self-opinion Russia has turned into a mediocrity of European football."

Former coach of the Russian national team Boris Ignatyev reproaches the Italian for the players' weak training. "Capello was not able to develop a method. For one game he would call up expert players, for another the young inexperienced ones. He did not feel the team. He constantly delayed substitutions and lost to almost all the serious rivals. The Russian team was feared under Hiddink and Advocaat. With Capello we lost respect," he said.

However, former Manchester United player Andrei Kanchelskis believes that it would be very naïve to blame the coach for everything. "It is the soccer players that enter the field, not the coach,” said Kanchelskis. “Capello has tried practically all the Russian players. He experimented a lot, he trusted the young players. I think that after the team's unsuccessful result at the World Cup it fell into a psychological pit, which it still can't get out of today. Capello was not able to get the players out of this condition, and now he has paid for it."