From Yashin to Arshavin: Russian records in world football 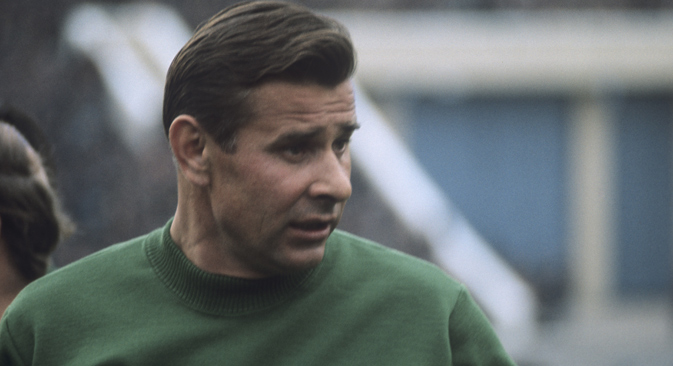 With the Russian team’s qualification for UEFA Euro 2016 in serious doubt following a string of limp performances culminating in an embarrassing recent home defeat to Austria, times are not good for Russian soccer. Yet despite all the doom and gloom, Russians can be proud of a number of world records held by their players in the sport.

Lev Yashin was the only goalkeeper in the history of soccer to have won the Golden Ball (1963). In 1994 FIFA created the Lev Yashin prize (renamed the Golden Glove Award in 2010), which is given to the best goalkeeper in each World Cup. The last winner of the award was Germany's Manuel Neuer, who is considered the world's greatest goalkeeper since Yashin. In 2014 Neuer came within a whisker of winning the Golden Ball. The Bayern Munich goalie made it to the final shortlist of three, and was the favorite among bookmakers, but lost out in the end to the Portuguese Cristiano Ronaldo.

Back in 1994 Oleg Salenko set a record in the final phase of the World Cup by scoring the most goals in one match. The Russian striker netted an incredible five times in a 6-1 rout of Cameroon in Russia’s final group stage match. However, even with Salenko's achievement Russia was not able to make it to the next round, having already lost to Brazil (0-2) and Sweden (1-3). Salenko had also scored Russia’s only goal in the match against Sweden, making him the tournament's top scorer, an honor he shared with the legend of Bulgarian football, Hristo Stoichkov. No player has been able to score more than three goals in a World Cup match since Salenko's feat, and only six players have scored a hat-trick (Gabriel Batistuta, Miroslav Klose, Pauleta, Gonzalo Higuain, Thomas Müller and Xherdan Shaqiri).

In the 2003/2004 season Porto player Dmitry Alenichev became the first to score in the final of both the Champions League and UEFA Cup. The goals he scored against Celtic (3-2) and Bayern Munich (3-0) gave Portuguese coach Jose Mourinho his first international trophies. After retiring from soccer, Alenichev entered politics, but later returned to the sport. In 2010 he began coaching and just recently, in June 2015, was appointed coach of Spartak Moscow.

In June 2004 Russian national team striker Dmitry Kirichenko scored the quickest goal in the final phase of the European Championships. It took Kirichenko just 65 seconds to put the ball past the goalkeeper of future European champions Greece, beating a 16-year record that had been held by another Russian player, Sergei Aleinikov, who in 1988 scored a goal after two minutes and seven seconds in a match against England. Kirichenko's goal was also the fastest goal scored in the history of Russia's national team. However, just recently, the record was beaten by Dynamo Moscow striker Alexander Kokorin, who scored against Luxembourg just 17 seconds into a European Championship qualifying match. Russia went on to win 4-1.

In 2009 Andrei Arshavin also made it into the history books. The striker, then plying his trade at Arsenal in the English Premier League, set a record for most goals scored in one match played at F.C. Liverpool’s Anfield stadium, netting four times in a classic 4-4 tie. Equally remarkable is that in the entire match he had only four shots on goal – and all of them went in. Together with Zenit St. Petersburg’s 2007-2008 UEFA Cup win and the Russian national team's third-place finish in UEFA Euro 2008, the year was the pinnacle in the career of perhaps the best Russian player of the modern era.

Unfortunately, the team – or to be more accurate, national team goalkeeper Igor Akinfeev – is also the holder of a rather unwelcome record: the most consecutive Champions League matches played without keeping a clean sheet.

Since 2006 the CSKA goalie has let in a total of 57 goals in 27 consecutive games in the tournament. Second place in this category is held by former PSV Eindhoven goalkeeper Ronald Waterreus with 16 matches and third place by the Greek Antonios Nikopolidis with 15 matches.

First published in Russian in Sports.ru.