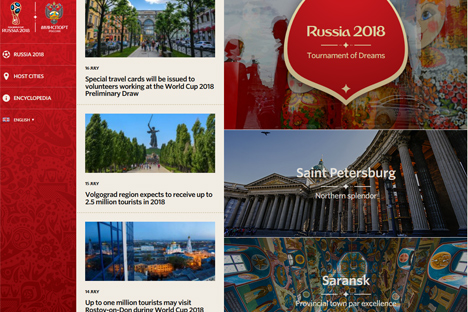 The Internet portal contains over 15,000 exclusive pictures of Russian cities, selected to be the venues for the football championship’s matches. Source: Welcome2018.com

The portal contains over 15,000 exclusive pictures of Russian cities as well as over 4,000 new verified interesting facts about the cities selected to be the venues for the football championship

An information and tourist Internet portal 'Welcome2018.com' launched by Russia for the 2018 FIFA World Cup will help spectators to be up to date to all developing events of the global football tournament and will show them all tourist attractions of Russia, Sports Minister Vitaly Mutko said on July 16.

The 2018 FIFA World Cup information and tourist news portal welcome2018.com was prepared with the support of Russian news agency TASS.

"The name Welcome2018.com stresses our willingness to invite everyone to Russia for the holiday of football, to the World Cup," Mutko said. "The portal will become the window to Russia both for foreign tourists and Russians."

"We hope that the portal will become the key communications channel for football fans regarding the presentation of Russia," the sports minister added.

TASS Director General Sergey Mikhailov said the portal would show the hospitability of Russia and would help to attract a record number of football fans to the country.

"Our task is to show the real Russia, which is glad to welcome its guests, to show the highest level of the [event’s] organization, which would be definitely displayed at the championship, and to open resources, which would attract the highest number of sports fans in the history of all sports events," Mikhailov said addressing a news conference with Mutko.

The launched information and tourist portal for the 2018 World Cup in Russia contains over 15,000 exclusive pictures of Russian cities as well as over 4,000 new verified interesting facts about the cities, selected to be the venues for the football championship’s matches in less than three years.

Russia selected 11 host cities to be the venues for the matches of the 2018 World Cup and they are Moscow, St. Petersburg, Sochi, Kazan, Saransk, Kaliningrad, Volgograd, Rostov-on-Don, Nizhny Novgorod, Yekaterinburg and Samara.