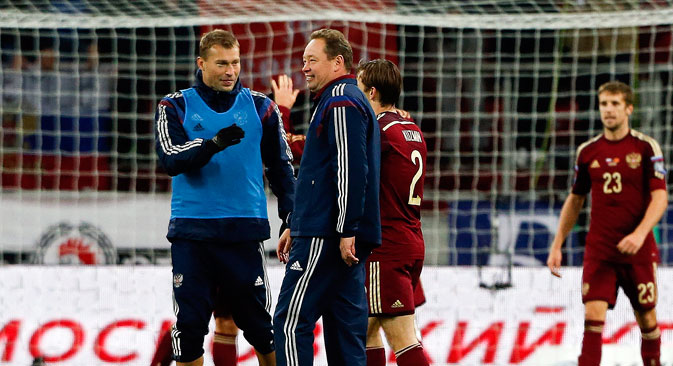 Reuters
Before September, the Russian soccer team’s chances of qualifying automatically for the 2016 European Championship hung by a thread after a string of embarrassing results under former boss Fabio Capello. Yet new coach Leonid Slutsky has now turned things around, securing second spot in the group in the final match. RBTH spoke to football pundits to find out what is behind this miraculous transformation.

Russia’s national soccer team has recovered from an alarming slump in form under previous coach Fabio Capello to reach the finals of the UEFA 2016 European Championship, winning its last four games to overhaul Sweden.

The Russians beat Montenegro 2-0 in their final game of the qualification campaign on Oct. 12 to seal second place in Group G behind surprise runaway winners Austria, erasing Sweden’s four-point advantage and securing Russia’s qualification to next summer’s tournament in France.

Since CSKA Moscow coach Leonid Slutsky took the reins of the national side, the team has witnessed a remarkable recovery in form, beating Sweden (1-0), Liechtenstein (7-0), Moldova (2-1) and Montenegro.

Interestingly, under Capello, who was fired in August 2015, the team won just once against the same opponents (beating Liechtenstein) and was defeated twice by Austria, leaving its hopes of qualifying for the tournament in peril.

According to football agent Sandor Varga, football agent, the language barrier was the main reason for the failure of Capello, who is regarded as one of the greatest club managers of all time, having won seven league titles in Italy and Spain and coached AC Milan to Champions League victory in 1993-1994.

If the results of the USSR are taken into account, Russia's national soccer team has qualified for its 11th European Championship. Russia’s best performance to date as an independent nation was the semi-finals in 2008 The Soviet Union won the European Championship once, beating Yugoslavia 2-1 in the final in Paris in the inaugural tournament in 1960.

“It is difficult to get your ideas across using an interpreter,” said Varga. “Capello was able to do this while coaching clubs, but when one works with clubs, one works constantly, daily. But with national teams, you only assemble the athletes for three or five days. Capello could not establish contact with the players in such short intervals.”

“Slutsky, on the other hand, knows all the guys well and can communicate with them easily. A glance and a couple of words is all he needs to get his athletes up and running. And believe you me, this is much more important than long hours of tactical training.”

“My mission both in the national team and in my club is to draw the guys out,” said Slutsky in an interview after Russia's match against Liechtenstein. “Only a very happy person can get creative on the field. And I try and set up pockets of happiness for them.”

According to sports reporter Edvard Serzhan, Slutsky's approach was like “a breath of fresh air” after Capello's “methods of iron discipline.”

“The players were allowed to play video games during their time in the training camps, to laugh during the sessions and to communicate with the press,” said Serzhan.

“The Italian ‘Iron Curtain’ was finally down. Slutsky also got a psychologist who held a full-fledged coaching session with the team. Prior to important matches, Slutsky had psychological profiles of all his players.”

A change in tactics

Unlike Capello, Slutsky did not use the qualification matches to test young players, but instead selected his best team. Igor Denisov of Dinamo Moscow was brought back as a midfielder, and Zenit St. Petersburg's Artyom Dzyuba became one the main attackers, scoring the winning goals in the matches against Sweden and Moldova, and later a quadruple against Liechtenstein.

According to former Russian international midfielder Igor Yanovsky, Slutsky called up the players who most merited selection, winning the support of both fans and pundits alike.

“Capello constantly made surprising decisions in this regard,” said Yanovsky. “First, he brought in players who hadn't even been part of their respective clubs' first teams, then he refused to bring in Artyom Dzyuba, Russia's championship best goal scorer

“Under Slutsky, everything went back to normal. Denisov was once again there to clean up after his partners, Dzagoyev was extremely useful as the box-to-box midfielder and Dzyuba was great at finishing off the attacks.”

A matter of principle

In contrast to the Capello era, nobody has been discussing the issue of the national team coach's salary since Slutsky’s arrival – mostly because there is literally nothing to talk about. Slutsky has decided to work for the team free of charge until the end of the qualifications.

“After all these debates concerning Capello's multi-million dollar contract and all this unsavory jiggery-pokery around the issue, Slutsky really did the right thing,” said Yury Syomin, ex-coach of the Russian national football team. “He worked for the sake of the game, and he accomplished his mission.”

Nevertheless, neither the team nor its fans should not be too happy about Russia's qualification just yet. As Syomin points out, the team was in a weak group to begin with and far tougher trials await in the intense atmosphere of the tournament itself.

“We've got those four wins, but, apart from Sweden, all our rivals were weaker than Russia. Slutsky was able to get the team to win during a difficult moment, but the final tournament will be much harder,” he said.

“Firstly, Slutsky does not have experience in preparing the team for a big tournament, secondly, he might exhaust himself after the club season with CSKA. Working two jobs has never been good for any coach.”

Could Russia be deprived of 2018 World Cup over latest FIFA scandal?