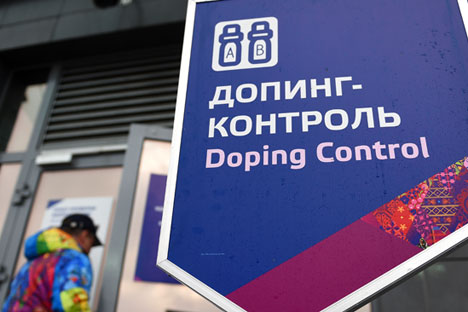 A file picture dated 21 February 2014 of the Doping Control Station in the Laura Biathlon Center during the Sochi 2014 Olympic Games in Krasnaya Polyana, Russia.

EPA
The IAAF's decision to ban Russian track and field athletes from participating in international competitions was a big blow for Russian sports. What are the possible outcomes of the situation? RBTH analyzes three potential scenarios

On Nov. 13 the Council of the International Association of Athletics Federations (IAAF) decided to ban Russia from competing under its aegis, after the World Anti-Doping Agency (WADA) published a report confirming that a system of concealing track and field athletes' doping violations had existed in Russia for a long time.

Now the track and field athletes risk missing the upcoming 2016 Olympic Games. Additionally, Russia has been deprived of the right to hold large competitions such as the leg of the World Race Walking Cup in Cheboksary and the World Junior Athletics Championships in Kazan, which is planned for 2016.

What is likely to happen now? Here are three possible scenarios.

1. Russia will quickly take steps to redress the situation and the national team will be rehabilitated

WADA chief Dick Pound has stated that Russia could be allowed to participate in the 2016 Olympics if it quickly resolves the violation. After the shock of the IAAF decision events in Russia started unfolding very quickly.

Grigory Rodchenkov, director of the Moscow laboratory that WADA accused of destroying 1,417 doping-positive tests, was immediately dismissed. Since then the Russian Sports Ministry has been saying every day that the Russian Athletics Federation (RAF) management will almost entirely be replaced.

"We have already formed a commission to investigate the doping cases in Russian athletics, which will cooperate with IAAF and WADA,” said Valentin Maslakov, RAF's vice president. “The Russian Olympics Committee (ROC) has already developed the roadmap suggested by WADA. It guarantees that reforms will be conducted in the RAF and that everyone involved in the anti-doping violations will be punished."

2. Russian athletes will not be allowed to participate in the Olympics and they will instead perform under the Olympic flag

Russian athletes are unhappy about the IAAF's decision. In particular, pole vaulting world record holder Yelena Isinbayeva wrote an open letter saying that it is unfair to deprive clean athletes of the right to participate in the Games because of someone else's violations.

However, if they are disqualified from the 2016 Games, Russian track and field athletes can still perform under the Olympic flag, a rule that is indicated in the Olympic Games Charter. Russian Sports Minister Vitaly Mutko has already spoken about such a scenario. International Olympic Committee President Thomas Bach, however, has called this possibility "complete speculation."

Russian TV commentator Olga Bogoslovskaya performed under the Olympic flag together with other athletes from the former USSR republics at the 1992 Olympics in Barcelona, winning a silver medal in the 4 x 100 meters relay.

"When you hear the anthem not of your country and you see the Olympic flag rising, as prestigious as it is, it is not yours and the emotions are different," said Bogoslovskaya. The former athlete is "95 percent sure that the situation will be resolved long before the Olympics" and the biggest punishment that awaits Russian athletes is missing the indoor world championships.

3. The Olympics in Rio will not have track and field at all

WADA has prepared a second part of the report, which the committee plans to publish in December. This will focus not on the Russian violations but corruption in the upper echelons of the International Association of Athletics Federations. According to member of the WADA independent committee Richard McLaren, the IAAF's activity may be suspended and track and field may not be represented at the Olympics in Rio de Janeiro at all.

Sports lawyer Valery Fyodoreyev believes that this scenario is possible: "If the president of an international federation accepts bribes to cover up positive doping tests, he can take them not only from Russia [former IAAF chief Lamine Diack was arrested for allegedly taking bribes from athletes for freeing them from doping persecution – RBTH]."

According to Fyodoreyev, the entire anti-doping system is in need of reform and the harsh measures now being taken by the international organs may make athletes from other sports think twice before taking illegal drugs.