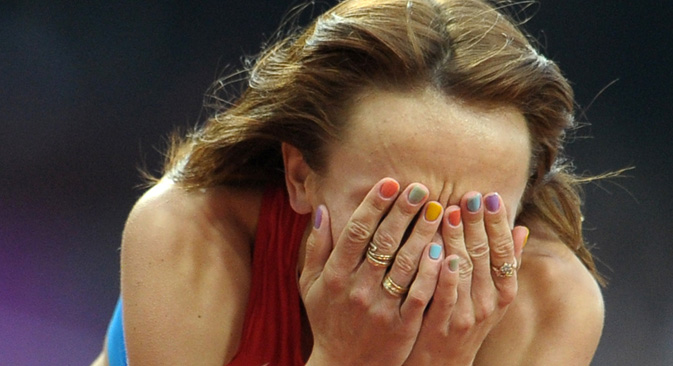 Russian athletes could miss out on next summer’s Olympics in Rio.

Grigory Sysoev / RIA Novosti
Comments ranging from contrite to belligerent greeted the decision by international track-and-field officials to bar all Russian athletes from competing in international competitions because of drug use.

Track-and-field officials consider the best response to a decision to bar all Russian athletes from competing in international competitions.

Late on the night of Nov. 13, Russia’s track-and-field athletes heard the news they had been dreading: the International

Association of Athletics Federation (IAAF) accepted the recommendations of the World Anti-Doping Agency (WADA) and temporarily banned the country from competing in international athletics competitions. The decision may mean that no Russian athletes will compete in the track-and-field events at next year’s Summer Olympics in Rio.

The ban was based on a 325-page report compiled by a commission headed by former WADA president Dick Pound that alleged a program of doping and concealment at the highest levels of Russian sport.

The decision was a bitter blow for Russia, which had argued a blanket ban would equally penalize clean competitors and suspected cheats.

Russia’s response to the WADA report was a mixture of belligerence and damage control.

On Nov. 11, after the report was released but before the IAAF meeting, President Vladimir Putin held a meeting with the leaders of Russia’s sports federations and instructed Sports Minister Vitaly  Mutko to conduct a complete internal investigation that would cooperate fully with WADA and other international doping bodies. Mutko later suggested that foreign doping control experts could be invited to work with the Moscow testing lab.

Grigory Rodchenkov, the head of the Moscow drug-testing lab at the heart of the scandal, produced a detailed defense of his conduct. “Dick Pound alleged that I ordered the destruction of 1,417 bio-samples,” Rodchenkov told Ves Sport. “But we stored every sample that WADA asked us to preserve during the course of the investigation. Many of the facts in this report present a peculiar interpretation of reality.”

However, shortly after loudly protesting his innocence, Rodchenkov resigned.

Mutko for his part almost personified Russia’s mixed message strategy. At times, he struck a conciliatory stance, for example telling a group of international journalists hours before the IAAF meeting that Russia would “do everything necessary” to comply with doping requirements. But he also took a consistently combative view of the allegations, hinting that calls to ban Russia from international competition were not motivated solely by concern for the integrity of the sport.

“Of course it’s possible that Russian athletes might be unable to compete in the Olympics,” the minister told R-Sport. “For some, it’s a good way of getting rid of a rival competitor; for others it’s a way to damage Russia’s international image.”

The varied comments coming out of Russia could reflect a need to balance domestic and international audiences. There has been a growing trend in recent months for Russian officials to blame foreign influences for the country’s problems, regardless of whether the issue is related to politics, economics or sport. The Russian team’s decision to leave the ice before the Canadian anthem played at the World Ice Hockey Championship final was attributed to outside troublemakers.

But officials also seem to understand that the country’s international sporting image depends on its commitment to antidoping policies. The day after the report was released, Vadim Zelichenok, acting head of the Russian Athletics Federation, told journalists that Russia had submitted an official reply to the IAAF. “In our reply to the IAAF, we accepted several of the allegations. However, we explained that all these violations occurred under the auspices of the previous regime within the Russian Athletics Federation and happened some time ago.”

The move to draw a clear distinction between past problems and the current antidoping regime is an attempt to acknowledge problems while salvaging the reputations of athletes competing today.

At the World Aquatic Championships in Kazan this summer, Mutko reiterated Russia’s commitment to drug-free sport, outlining newly introduced measures that include criminal liability for involvement in doping, the creation of the independent RUSADA antidoping agency and a program of 15,000 drug tests every year.

After the release of the WADA report, Mutko took a similar stance, telling journalists, “We have clear instructions from the president to find common ground with the international organizations and I will do that; I will co-operate with them.”