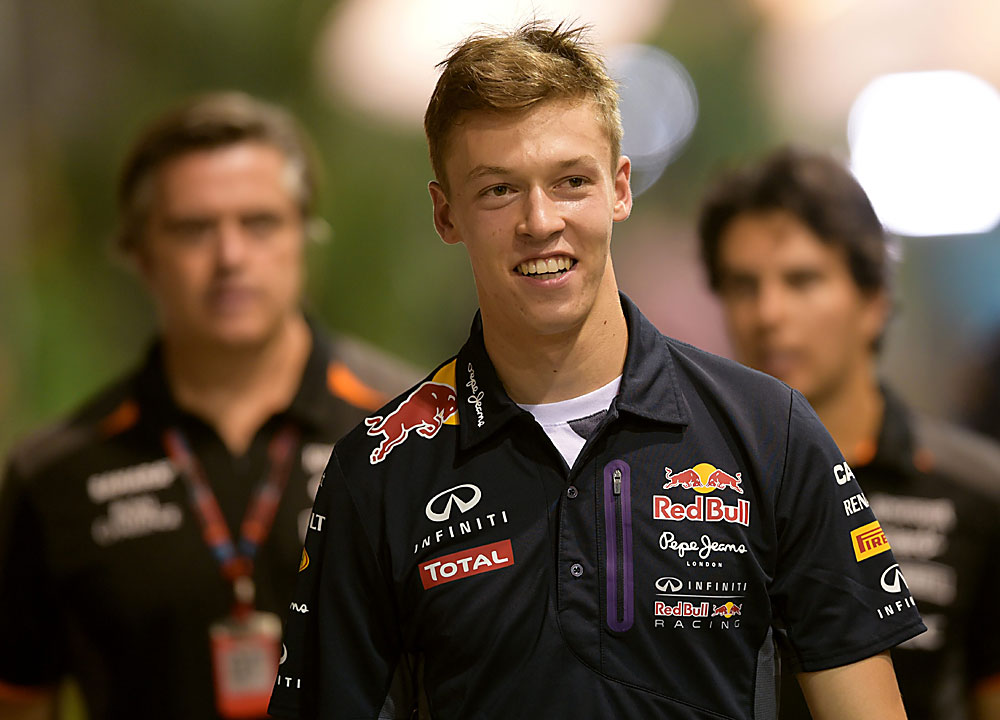 AP
The young Russian F1 driver tells RBTH how Red Bull intends to outdo Mercedes and Ferrari in the upcoming season and shares his thoughts on last year’s success.

On March 20 the Grand Prix in Melbourne kicks off the new Formula One season. For 21-year-old Red Bull Racing driver Daniil Kvyat this is only his third year at the top level of motor sport.

However, the young Russian is expected to win at least one race this season. And Russian F1 fans have reasons to be optimistic: Kvyat is one of the most progressive drivers on the circuit.

In the top 10 in just two years

In 2014 Kvyat, a fresh GP3 champion, successfully debuted for the Toro Rosso team, becoming one of the youngest F1 drivers and surpassing even Sebastian Vettel.

A year later Kvyat moved to Red Bull, replacing Vettel, who had signed with Scuderia Ferrari. In one season the Russian notched up 95 points, finishing seventh place in the individual driver standings.

Red Bull F1 driver Daniil Kvyat from Russia drives his new car during a testing session at the Catalunya racetrack in Montmelo, just outside of Barcelona, Spain, Feb. 24, 2016. Source: AP

This is the best ever result for a Russian F1 driver. In comparison, Kvyat's predecessor Vitaly Petrov could only amass a total of 64 points over three seasons and his best-ever finish was ninth place.

Daniil Kvyat has one of the most modest salaries of all 18 drivers in Formula One. In 2016 he will earn 680,000 euros ($755,000), which puts him in 14th place in terms of earnings. The highest earner is McLaren driver Fernando Alonso (36.5 million euros, or $40.5 million). Kvyat's Red Bull teammate Daniel Ricciardo is in seventh place, taking home 5 million euros.

Despite the obvious success, Kvyat himself is ambivalent about last season.

"There is room for me to grow,” he said. “It was my second F1 season and the first in such a serious organization as Red Bull. I was surrounded by new engineers who proposed approaches that were completely new for me. Many things I basically had to learn from scratch.

According to the Russian driver, this made it difficult for him to accumulate points in the season's first races.

“I was a bit nervous and made mistakes that are not characteristic of me,” he said. “But I didn't give up and communicated a lot with the engineers. You can say I lived with them. And this bore fruit."

In 2015 Kvyat set another Russian F1 record, coming second in the Hungarian Grand Prix. The best finish his predecessor Vitaly Petrov could muster was third place at the Australian Grand Prix in 2011.

But Kvyat prefers not to emphasize his achievement at the Hungaroring, saying that there are “several other races of which I'm even more proud.”

“The turning point in the season occurred at the Monaco Grand Prix,” said Kvyat. “I was able to finish fourth and this gave me a lot of confidence. I understood that I was working in the right direction.

“I also remember the Mexico Grand Prix,” he said, referring to the race in which he was able to make fewer pit stops than his rivals without falling behind. “This was the best race in terms of fuel consumption."

Battle within the team is additional stimulus

In 2016 Red Bull has presented a new car with which Christian Horner and company hope to break Mercedes and Ferrari's hegemony. The Austrian team will continue using the Renault engine but under the TAG Heuer brand.

"Sure, we still need to get used to it, but the first test drives have shown that we can expect excellent results,” said Kvyat.

There is also internal competition between the two Red Bull drivers. Last season Kvyat finished just three points ahead of his teammate, the Australian Daniel Ricciardo, in the drivers’ championship standings.

"When we remove our helmets, we have really good relations,” said Kvyat, who believes that the internal rivalry is beneficial for both the drivers and the team.

“But we are also competitors and each time we're on the track we try to make each other's life very difficult. This is normal. Competing with Ricciardo helps me reach a new level, increase my limits. It forces me to work harder, learn new things."

Russian Sherp ATV: A perfect vehicle for the post-apocalypse>>>