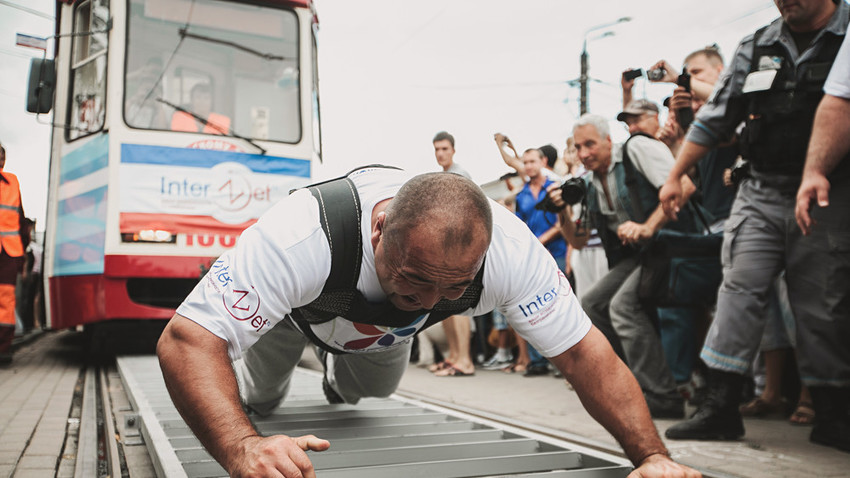 Yevgeny Khazhey/TASS
Stopping horses at full gallop, pushing a train, lifting a camel, and spinning a Ferris wheel with his bare hands – it’s all in a day’s work for Russia’s top strongman Elbrus Nigmatullin.

On March 3, 2016, the 41-year-old strongman from Chelyabinsk (about 800 miles east of Moscow) dared to repeat an achievement of the legendary 19th century Russian acrobat Alexander Zass (also known as Samson), who with his two hands held onto two horses pulling in opposite directions. However, while this feat by Zass can be seen only in black-and-white photos, the feats of the modern Russian Hercules are easy to find on YouTube.

“This strongman act is performed as a tribute to Russian strongmen of the 19th century, and an attempt to revive the forgotten achievements of our legendary athletes of the past. For over a century, no athlete in the world dared to repeat this dangerous strongman act, Nigmatullin told RIA Novosti.

According to the athlete, for training he did not need horses.

“I used ordinary football [soccer] goalposts, parallel bars and crossbars as exercise equipment. Then I used barbells and dumbbells in a training room,” Nigmatullin told the Rossiyskaya Gazeta daily.

Nigmatullin was born in Bashkiria, a region to the south of the Urals, a territory of nomadic herdsmen. In his childhood, he competed in local ethnic Kuresh wrestling competitions. Then he took up heavy athletics, arm wrestling, and powerlifting.

In 2001, he moved to the strongmen athletics field, where in 2005 he became world No. 2. However, he became famous not because of his athletic awards, but eccentric show performances.

In March 2015, he picked up a platform on which a 700-kilogram (1,500 lb) camel was standing, and held it for 45 seconds. The lifting of the camel had a symbolic meaning – the camel is a symbol of the city of Chelyabinsk, where the athlete performed this feat.

In addition to spectacular tricks with animals, Nigmatullin has also performed many exciting strongman stunts. In the summer of 2013, he demonstrated his great power by moving seven coupled-together trams, with a total weight of 127 tons, a distance of 7 meters (23 feet).

However, for this mighty man this was not enough: A few months later, Nigmatullin took on a train weighing 320 tons. The athlete was able to manually move the train a full 10 meters along the tracks.

In July 2014, this popular athlete invited his fans to come to the Chelyabinsk City Park. The people that gathered there saw how Nigmatullin manually spun a Ferris wheel with a diameter of 32 meters.

It took the athlete about eight minutes to move this 34-ton structure through one full rotation.

Moreover, during this feat, one of the Ferris wheel’s cabins jammed, but Nigmatullin did not give up, and was able to successfully complete his stunt.