Russian soccer team to be tested for doping 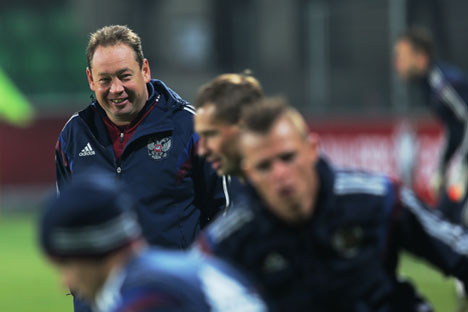 Head coach of the Russian national football team Leonid Slutsky during his team's training session at Zimbru Arena prior to the UEFA EURO 2016 qualifier between the national teams of Russia and Moldova.

Ria Novosti/Vitaliy Belousov
According to the team doctor, Russia’s whole national football squad is to be tested for banned substances ahead of the two upcoming friendlies against Lithuania and France.

The doctor for the Russian national soccer team, Eduard Belzugov, has announced that the entire squad will be drug tested at their next training camp, taking place March 23 and 24 at Dynamo Moscow’s training base in Novogorsk (in the north of the capital).

Europe’s football governing body UEFA has already severed ties with the Russian anti-doping agency, RUSADA, meaning that the testing will be carried out internally, outside the remit of UEFA.

The news was announced after a meeting at the Sechenov Moscow State Medical University on March 22.

“Non-competition doping control is possible in the preparation of the national football team for any tournament,” Belzugov told news agency TASS, commenting on the decision to carry out the tests.

“The training camp is now underway and it is certain that doping officers will be conducting tests. The whole team will be tested at once. A doping officer can arrive at any time to collect blood and urine samples,” said Belzugov.

Russia will play Lithuania in Moscow (March 26) and France in Paris (March 29) during the international break as the team looks to test itself before facing a difficult group at the 2016 European Championships in France in June.

Belzugov admitted that doping inspectors had not visited a single Russian national team match this year.

The last Russian international footballer to test positive was midfielder Yegor Titov, who received a mere 12-month ban after testing positive for the banned stimulant bromantan in January 2004.