Leonid Slutsky: Russia’s no EURO 2016 favorite but we’re strong as a team 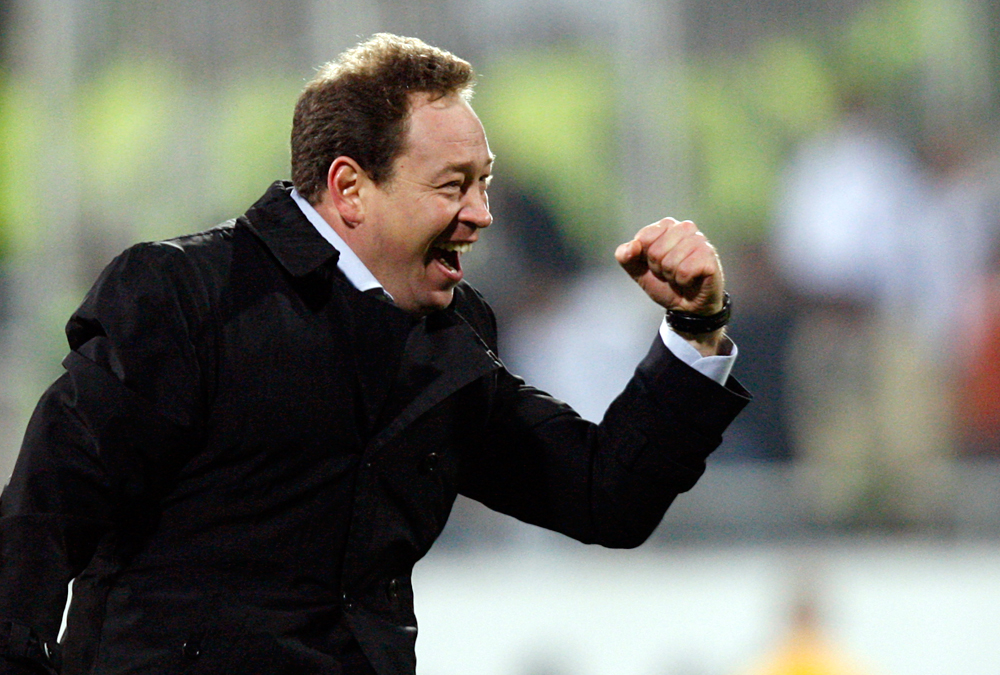 Leonid Slutsky: "We are strong as a team."

Reuters
The Russian national team could use some superstars, but a well-structured team game will help it put on a fine performance at the EURO 2016 football championship in France in June, says head coach Leonid Slutsky.

RBTH: Do you consider the Russian national team a favorite at the EURO 2016? If not, who is?

Leonid Slutsky: We are not the tournament favorites. To begin with, we need to get out of our group. If we manage to, we will try to play each knockout match with the intention of winning.

I think the French national team is the favorite. First, they are the tournament's hosts. Second, they have a very powerful team. Each lineup has first-class players. We saw this during the friendly at the Stade de France. I would also not forget the national teams of Spain, Germany, Belgium and Italy.

RBTH: The Russian national team does not have any superstars. Is this an advantage or a disadvantage?

L.S.:Probably a disadvantage. It is always nice to know that your team has a world-renowned player. However, we also have our leaders: Igor Akinfeev, Vasily Berezutsky, Sergei Ignashevich, Roman Shirokov, Igor Denisov…These guys have been playing for the national team for a long time, they've participated in important tournaments and are capable of inspiring their teammates.

RBTH: Which of your protégés could be described as a match-changer?

L.S.:The Russian national team has many strong and experienced players. We are strong as a team. Out of the young players there is [CSKA Moscow midfielder] Alexander Golovin. He can really become a high-level player, but for this he has to work a lot. Oleg Shatov from Zenit [St. Petersburg] is also very strong.

RBTH: Out of the top Russian players, only Denis Cheryshev and Alexander Kerzhakov play for foreign teams. What's better for a football player: playing at home or proving himself in a foreign championship?

L.S.:If a young player receives a good offer from a foreign club, he should take it. In Europe you are part of a very harsh competitive system and if you withstand it, you become a real professional.

In Russia you can also grow and develop, but unfortunately we don't have much of the right infrastructure. It’s one thing to go through the school of a big club such as CSKA, Zenit, Spartak [Moscow] and Dinamo [Moscow] but another to play for a youth team in the provinces.

If you are not noticed by the big clubs' scouts, your chances of becoming a top player are very low. Those places don't have the right infrastructure, strong coaches, the medical staff. Western Europe does not have these problems. There a town with 60,000 inhabitants has all the necessary things. This is what we must aspire to.

L.S.:Back then we had the strongest national team in contemporary Russian history. The team played exceptionally well and reached the semi-final. This is indeed our national team's most significant victory. I perfectly remember the match with the Netherlands [the quarter-final match in which Russia won 3-1 – RBTH] and how I felt after the whistle blew. My happiness had no limit. I would like to feel the same thing as a coach.

RBTH: But why did the leaders of that national team – AndreyArshavin, Roman Pavlyuchenko, Yuri Zhirkov– not realize their potential 100 percent?

L.S.:Each player has his own reason. Arshavin, I think, proved himself excellently at Arsenal. Hisstatistics were excellent and he was the team leader for a long time.

Leonid Slutsky: Footballers must be allowed to express themselves

Pavlyuchenko also scored a lot for Tottenham and perhaps hurried with his return to Russia. According to his comments, Spurs coach [Harry Redknapp– RBTH] was interested in him.

Zhirkov also used to say that [then-coach of Chelsea, now boss at Zenit] Andre Villas-Boas tried convincing him to stay at Chelsea. But all of them wanted to return home. They had gone abroad at a mature age with a rather low level of English. It was difficult to adapt.

RBTH: For the last 10 years, before your arrival, the Russian national team had been coached by foreigners. What's your evaluation of that period in the context of Russian football history?

L.S.:This was a very fortunate, successful and to a certain degree a revolutionary period. The foreigners achieved many important results. The team participated in the world and European championships on a regular basis. The philosophy of the players changed. They understood that they've got lots of potential.

RBTH: Which contemporary top coach's philosophy impresses you most?

L.S.:I really admire FC Bayern and FC Barcelona's game. These teams create miracles on the field. These are well-structured mechanisms: a lot of movement, a high percentage of precise passes. You can say that these are world teams. However, it is difficult to say what the coach's role in all this success is.

RBTH: You basically never played on a professional level. Do you think there are differences between your approach and that of coaches who did play professionally?

L.S.:Everything comes with experience. In the beginning it was difficult for me to work with professionals, but then I managed. Perhaps for a former player it's easier to become a coach. However, we should also not forget about professional degradation. One thing is to play for great coaches and learn something, the other is to be managed by those mentors playing "kick-and-run" football.

RBTH: You’ve called naturalized Brazilian player Guilherme Marinatoup to the Russian national team. Do you think he is capable of becoming the team's starting goalkeeper?

L.S.:Guilherme is an experienced goalkeeper, coming from an excellent school. I have absolutely no issues with naturalization. This is a normal practice all around the world. The Germans, the Spanish, the Italians naturalize football players from other countries. Why shouldn't we?