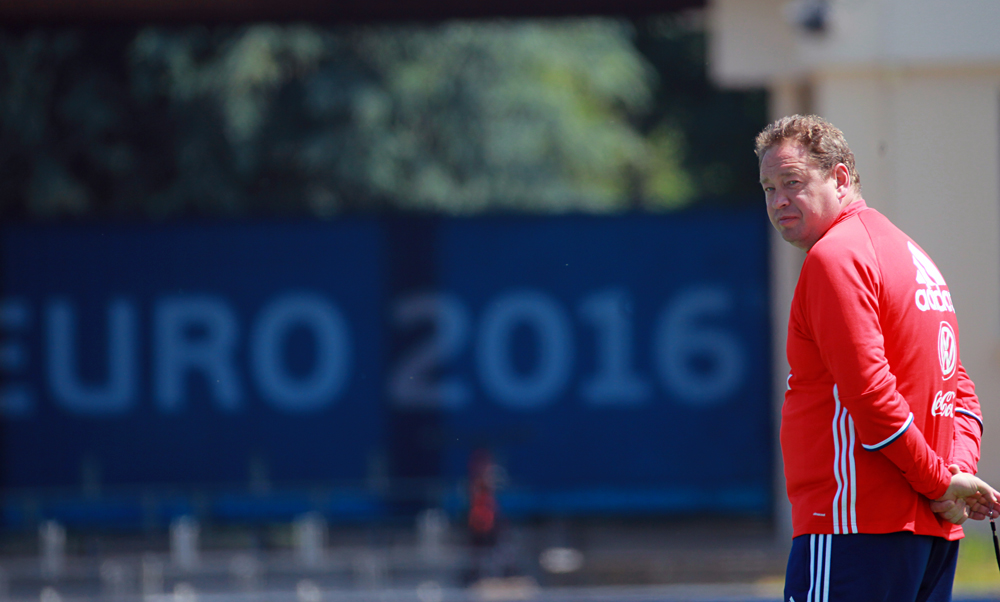 The Russian national football team's coach Leonid Slutsky during the training session at the Parc Omnisports stadium in Croissy-sur-Seine, France.

Vitaliy Belousov/RIA Novosti
The Russian soccer team is preparing for a showdown with group favorite England in its opening match in Euro 2016 on June 11.

Excitement is building among Russian soccer fans ahead of the UEFA 2016 European Championship in France, which begins on June 10.

Leonid Slutsky’s men open their Group B campaign on June 11 against a talented young England side at Marseille’s Stade Velodrome.

Russian bookmakers are clearly not especially optimistic about their team’s chances of beginning the tournament with three points, with Russia at 4-6 to emerge victorious and group favorite England at 1-9 on to win.

“It’s clear that this team [England] is one of the favorites for Euro 2016,” Slutsky told Sport Express on June 4, adding that while he was impressed by England’s attacking options and depth of quality, “I’m far more concerned right now by the question of whether we turn up in optimal condition.”

The hopes of Slutsky’s team, which will also face Slovakia and Wales in its bid to reach the knockout stages, have been slightly dampened by injuries to key players, with star forward Alan Dzagoev missing the tournament in France because of injury.

The situation was compounded when midfielder Igor Denisov was injured during a friendly match with Serbia on June 5, resulting in a late call-up for Artur Yusupov from Zenit St. Petersburg.

However, the tournament sees the addition of two new players to the Russian squad: naturalized Brazilian goalkeeper Guilherme, who has been playing for Moscow FC Lokomotiv since 2007, and Roman Neustädter, a Russo-German defensive midfielder from Bundesliga's Schalke 04 who is likely to play his first competitive match with the Russian team.

To find out more, read RBTH’s exclusive interview with Russian coach Leonid Slutsky, where he assesses Russia’s chances at the tournament, and read the report from our sports writer Andy Potts about the key talking points for the Russian team ahead of Euro 2016.

Take a guess: How justified are salaries of Russian players?