Russia heads home: Fans look for where to lay the blame for Euro fiasco 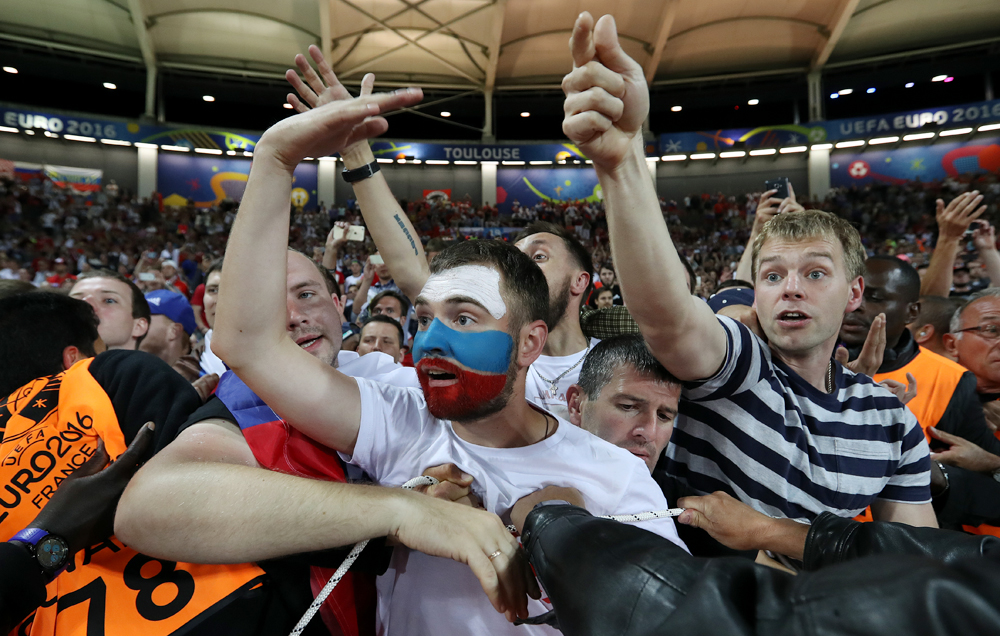 Russian supporters are pushed back as they shout at their team after Russia lost the Euro 2016 Group B soccer match between Russia and Wales at the Stadium municipal in Toulouse, France, June 20, 2016.

AP
Russia's ignoble performance at Euro 2016 has caused a storm of indignation Russian fans. Not only players but also officials are taking the heat.

Going down three-nil to Wales in Toulouse has brought an end to Russian ambitions in the European football championships. After earning just one point in three matches, coach Leonid Slutsky's team goes home after one of its most colorless tournaments of late.

After the match, Slutsky apologized for the team's failure and took all the blame. "People who supported us did not deserve the level of play that we showed," he said. "We had enough time to prepare. If we failed to do it for a game like today, this is the fault of the coach." Slutsky also said he was prepared to resign.

Slutsky's failure came as a surprise to the Russian public. It seemed that the coach, who took on the job after the departure of Fabio Capello, could easily bring the team to Euro 2016, confidently conducting matches against rivals in the group stage. In September 2015, in the final match, where the team had no room for error, it defeated the Swedish team led by Zlatan Ibrahimovic (1-0).

At Euro 2016, however, no trace remained of its former confidence. Fans noted few exciting attacks. Three strikers (Artem Dzyuba, Fedor Smolov and Alexander Kokorin) did not score a single goal. The defense played poorly, too: Time and again opposing teams exploited holes in Russia's defense. If it were not for goalkeeper Igor Akinfeev's good performance, the team could have well let in more than more than six goals.

Fans and experts on social networks are not holding back about the lack of sense in the team's performance. "Golovin replaces Shirokov. Roman passes him the captain's armband. Alexander passes it to Ignashevich, who passes it to Akinfeyev. It was the most exciting series of passes by the Russian team," user kapitan777 wrote mockingly on the Championat.com website. "Tactics: I am indignant about rumors I was a member of Russia's national team," another user, ravel, remarked.

However, even more critical barbs were aimed at the leadership of Russian football, which, according to many commentators on sports websites, has done nothing for the development of football in the country.

"In a normal country, with such sports results (either in football, or with the disqualification of athletes or the cases of doping), the sports minister would resign," user just-whatever complained on the Sports.ru website.

In turn, sports minister Vitaly Mutko urged the public not to go to extremes, noting that Russia does not have the resources for a more successful performance. "This is the level of football that we have," Mutko told TASS news agency. "We have to work on it. We don't have the highest-class players. This is the objective situation..." However, the minister remained silent about specific steps to remedy the situation.

Fans were most critical about the questionable limit on foreigners in the Russian football league [since 2015, Russian clubs have been obliged to have at least five Russian players in the first team; officials attribute such a move to the necessity to train more home-grown players for national teams - RBTH]. However, the limit has not lead to better results so far, but rather reduces the overall level of players, who have an overprotective environment at home.

Vice-captain and central defender Vasili Berezutski agrees with this. "We do not have our own stars," Berezutski told reporters after the games against Wales in Toulouse. "We must do something with Russian football. The players, probably, must go to Europe. The fact that we all play in the Russian championships sets some limits –this is not beneficial."

Read more: 1 Russian in a sea of Englishmen>>>