Will Russia fail on home turf at the 2018 World Cup? 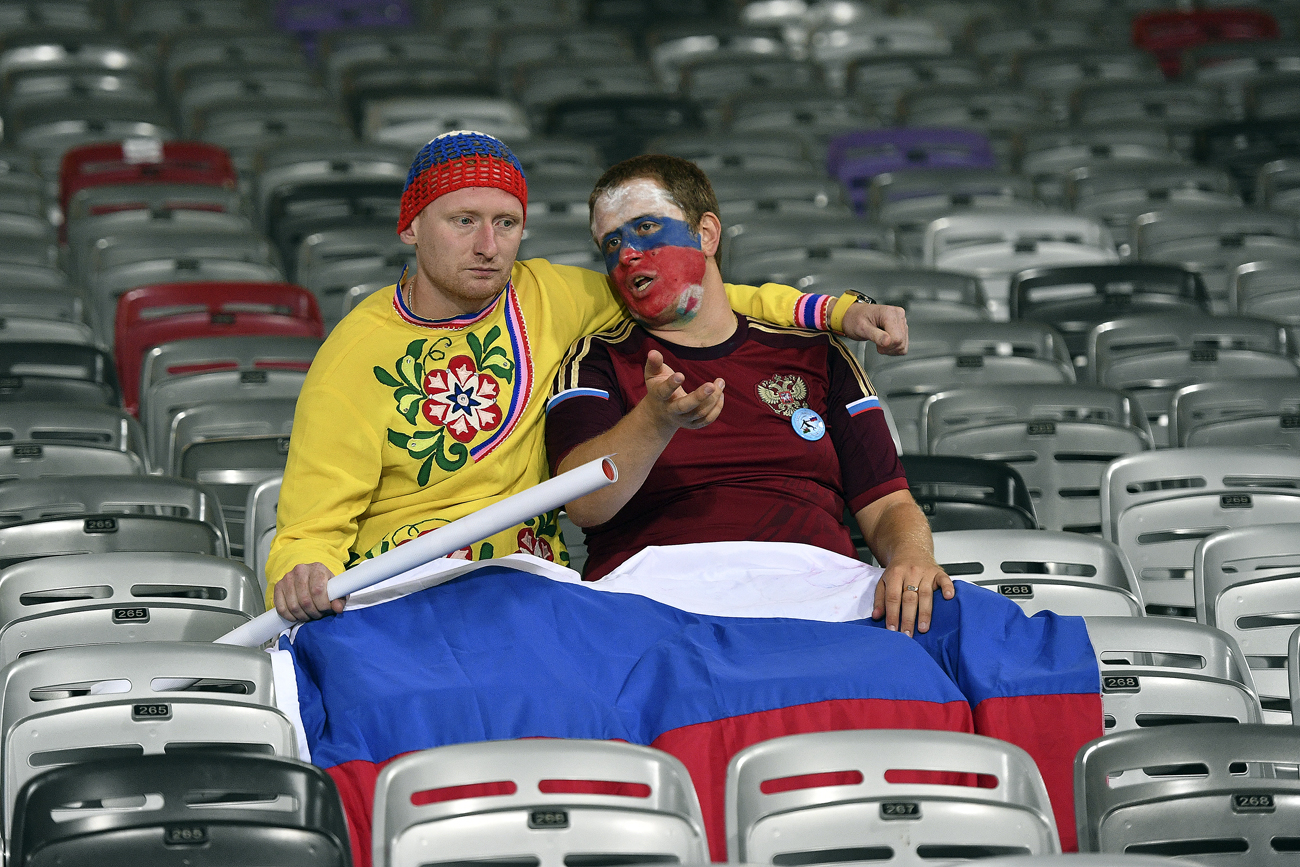 Russian fans after the UEFA Euro 2016 group stage match between the national teams of Russia and Wales.

Vladimir Pesnya / RIA Novosti
After the Russian national soccer team’s abject performance at Euro 2016, there are few who anticipate that anything will change at the World Cup in two years, with many fearing the side will be humiliated at its own tournament. While there are numerous objective reasons for pessimism, is there any hope that the team could surprise fans?

Despite raging social indignation at the failure of Russia's soccer team at Euro 2016 – side returned home from the tournament in disgrace after finishing bottom of its group in the wake of embarrassing defeats to Slovakia and Wales – the authorities have not taken any systematic measures to improve the situation in the team.

Russian Sports Minister Vitaly Mutko has linked the team's lack of success to the general insufficient technical ability of the players, while head coach Leonid Slutsky, who resigned after the tournament, attributed the performance to tactical errors and injuries to the leading players.

However, public attention was focused not on the problems of the national team in general but more on the "inappropriate" behavior of two players, Alexander Kokorin and Pavel Mamayev, who after the tournament attended a lavish party at a club in Monte Carlo where 250,000 euros ($275,000) worth of champagne was served to the accompaniment of the Russian national anthem. The scandalous video of the millionaire footballers’ excess that quickly found its way onto the internet stimulated the public's desire to find a culprit, as well as a simple and clear solution.

An example of this simple solution was a petition to dissolve the Russian national team, signed by almost a million internet users. But this outcry could never have been expected to lead to anything since after major tournaments the national team is always dissolved and then is again formed by the new coach.

Another simple (and just as unreal) solution was put forward by an official: President of the Russian Football Association Anatoly Vorobyov proposed concentrating all the national players in one club so that in two years they could improve.

A limit on foreign players

Russian officials are well-known for trying to obtain good results through the use of prohibitive measures. A limit on the number of foreigners playing for club teams has existed since 2006. This rule, according to officials, is supposed to help Russian footballers develop their talents and break through into the first teams of the best Russian clubs.

However, in 10 years the limit has not led to an increase in quality players. But it has resulted in a drastic growth in salaries for players with a Russian passport, who in conditions of limited competition have become a scarce commodity.

The collapse of children's and regional soccer

But the biggest problem concerning Russian soccer is not even the lack of will and the indifference of a small group of millionaires spoiled by the limit on foreigners. The real problem is the abyss between professional and amateur soccer.

The soccer pyramid, one of FIFA's main principles, is basically in ruins in Russia. Besides the wealthy Premier League, in which 16 teams participate and which is financed by state corporations and regional authorities, there is practically nothing.

A minimum number of professional clubs will participate in the three Russian divisions in the 2016-2017 season: 94 (only 12 of them are from Siberia and the Far East).

Attendance is also depressing: The average number of fans attending a Russian Premier League match during the 2015-2016 season was 11,046 (in the German Bundesliga it was 43,300 and in the English Premier League it was 36,452).

Professional soccer in Russia is becoming more and more elitist. Talented players from the provinces can hardly make it into the big teams. Only children from well-to-do families are accepted into the academies of the important clubs – only there do young players have a chance to develop a professional career.

The situation in the provinces is dire: Children's soccer leagues barely exist and there is a distinct lack of coaches who are willing to work for little money.

So what can save the Russian national team in 2018?

The man most likely to be the new head coach of the Russian team, Stanislav Cherchesov, is renowned for his harsh methods of working with players.  In Russia many think this is an advantage: There is an opinion that Russian footballers only understand the method of the whip. At the same time, Cherchesov, a former national team goalkeeper, has also successfully coached in Europe, winning the Polish championship with Legia Warsaw last season.

Therefore a strong hand together with coaching talent may help Cherchesov obtain a result at the World Cup that will be acceptable for Russian fans in the short term.

The team may also benefit from good old-fashioned luck. Even if there are no tectonic shifts in Russian football, the national team still may perform well as a result of favorable circumstances. In football, where on average just 1-2 goals are scored per game, a lot depends on chance. And support from home fans can work miracles.

What’s more, the starting conditions for the Russian team are excellent. Being the host country, Russia is exempt from qualification matches and will be in the first pot during the draw, which should provide weaker competitors in its group.

Read more: How much is Russia spending on building stadiums for the 2018 World Cup?