How judo became one of Russia's main Olympic sports 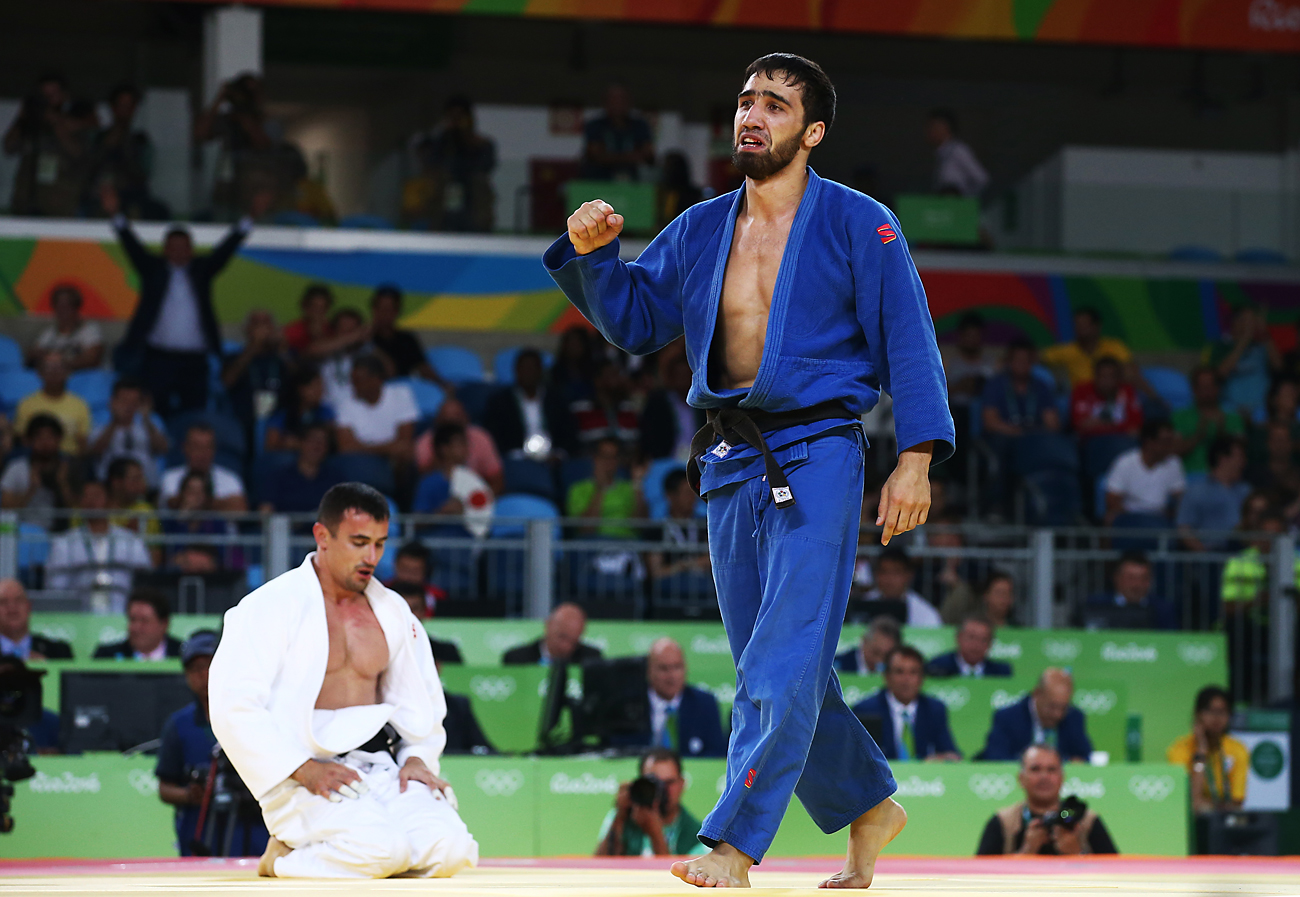 Stanislav Krasilnikov/TASS
In the last eight years Russian judo has made a giant leap forward. And it's not only down to Vladimir Putin being a role model for young judokas.

Russian judokas, along with Russian fencers, have been among the top medalists at the Rio Olympics. Beslan Mudranov, who won the gold medal in the under-60kg category, set the tone for the Russian athletes, and three days later Khasan Khalmurzaev won gold in the under-81kg category.

No one was surprised by the victory of Russia's male judokas in Rio after their performance at the London Olympics in 2012. That year the London Games produced three Russian champions: Arsen Galstyan, Mansur Isaev and Tagir Khaibulaev. In Rio, however, the ovations went to other Russian judokas.

Thirty-year-old Beslan Mudranov had been going for the gold for an entire two Olympic cycles. He was not chosen for the 2012 Olympics, having lost the position to Arsen Galstyan, who became champion in London. But Mudranov did not give up and in the end he was able to turn his cherished dream into reality.

The other Olympic champion in Rio is 22-year-old Khasan Khalmurzaev, who was not sure he would be part of the Russian team until the last minute. Competition in Russia in his weight category is extremely high.

Russia's president, Vladimir Putin, is a passionate admirer of martial arts and is an eighth dan in judo and ninth dan in taekwondo. But for a long time Russian judokas could not brag about any outstanding achievements. A bronze and two silvers in the 2000 Olympics in Sydney and two silvers and three bronzes four years later in Athens obviously did not suit a country with big athletic ambitions. At the 2008 Games in Beijing the Russian national team did not pick up any medals at all.

After the failure in China the Russian national team invited Italian judo expert and 1980 Olympic champion Ezio Gamba to be head coach. Under his management Russian judokas began to shine on the mat and in just a few years won eight Olympic medals, including five gold ones.

London 2012 Olympic champion Mansur Isaev says that Gamba managed to psychologically liberate the athletes. "In terms of technique, the head coach does not interfere in our work. He will only correct or suggest something. The atmosphere changed, the team has become very friendly. When we practice we all help each other," Isaev told RBTH.

All the recent Russian Olympic Judo champions are from the Caucasus, where the martial arts are very popular. "We [in the Caucasus – RBTH] have fighting in our blood. Life is a fight and you must always find some kind of competition. From our very childhood we are inculcated [with the thought – RBTH]," said Isaev.

Vladimir Putin, who would attend the judokas' training, had predicted success for the Russian athlete half a year before the Olympics. "When I asked who was our greatest competitor at the Olympics, many said the Japanese," Putin told journalists.

"We have a lot of respect for the Japanese since they are the founders of this sport. Then I asked one of our athletes where he was from. 'I'm a Kabardian,' he said [Kabardians are a people from the North Caucasus – RBTH]. The Kabardians will be better than the Japanese, with all respect."

The judokas say that the head of state's attention for their sport can be felt. "Obviously Vladimir Vladimirovich has always loved our sport and practiced it in his youth. That is why we meet with him before almost all the big tournaments. We absorb his energy and go forward," said Isaev.

But the success of Russian judo is attributed not so much to the judokas' general sparring with the president but to the significant growth of investment in this sport. "Our national team has everything it needs and no one refuses us anything," explained Isaev.

Russia's great achievements at the 2012 Olympics in London resulted in a substantial increase in state funding. From 2013 to 2016, annual expenses for athletes of all levels increased from 310 to 445 million rubles (from $4.8 to $6.9 million).By 2020, in accordance with the Russian Judo Development Program, expenses for the sport will increase up to 508 million rubles ($7.9). Currently, there are 24 specialist centers that prepare judokas in the country (in 2012 there were only three) and by 2020 their number will grow to 52.Investments are made in the sport and in individuals. For example, Rio Olympic champion Khasan Khalmurzaev will donate his 4-million-ruble prize money ($62,500) to the development of children's judo in his native Republic of Ingushetia.

Read more: Settling it with your fists: Russia’s ancient traditions of combat>>>