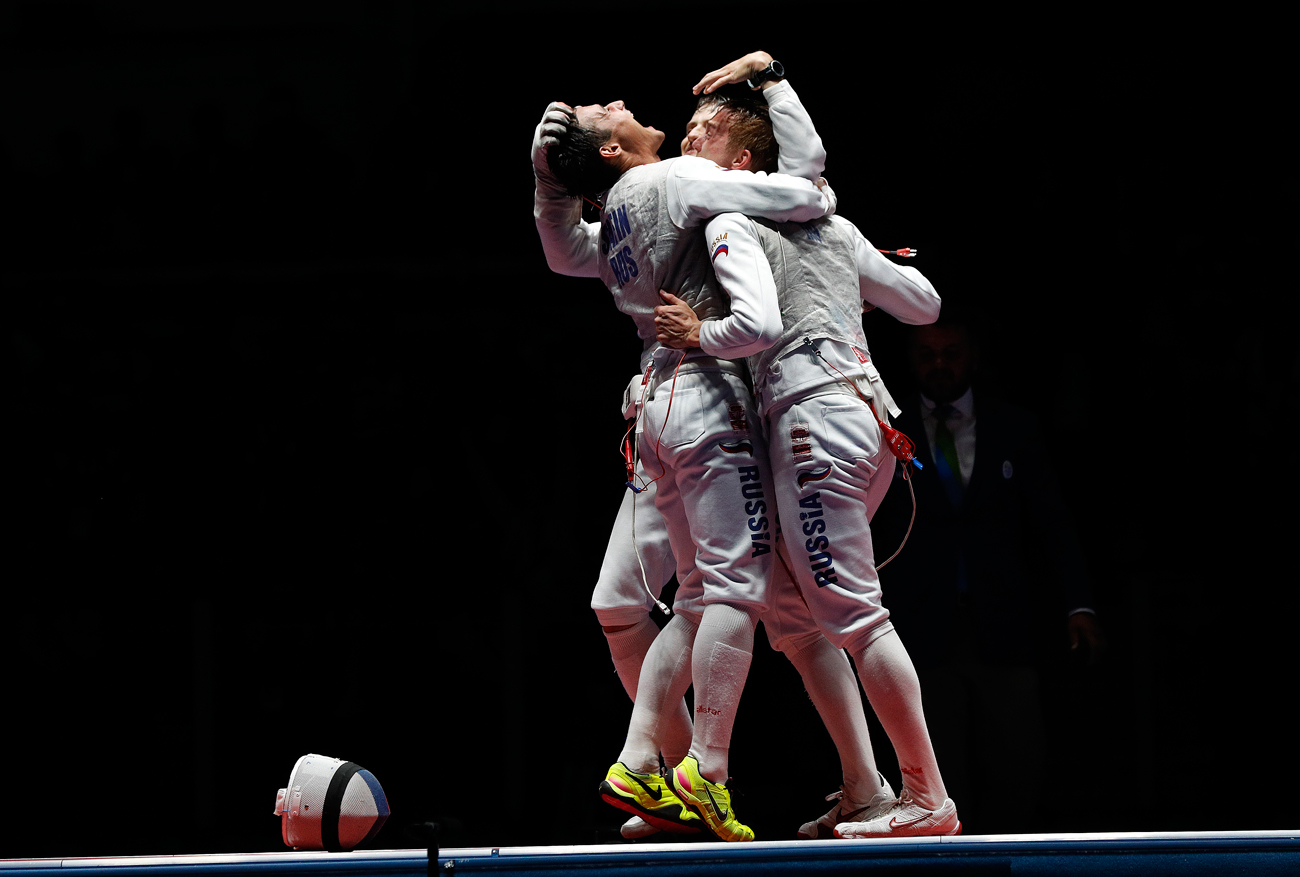 Timur Safin from Russia, celebrates with his teammate after defeating France during the Gold medal match in the men's team foil competition at the 2016 Summer Olympics in Rio de Janeiro, Brazil

AP
The blood, the sweat, the tears; the highs and the lows; the victories and the defeats: Russia’s Olympic athletes have experienced the whole range of emotions during their moment in the spotlight in Brazil. Here are eight key moments for the Russian team.

Timur Safin from Russia celebrates with his teammate after defeating France during the Gold medal match in the men's team foil competition at the 2016 Summer Olympics in Rio de Janeiro, Brazil. Source: AP

The Russian fencing team was the most successful in Rio, winning four gold medals. The male fencers provided the final touch to the Russian triumph in Carioca Arena 3 – before returning to Moscow the happy athletes cut their coach Ilgar Mamedov's hair, leaving him entirely bald. Before the Games, Mamedov had bet his locks that the Russian fencers would not win more than one gold.

David Belyansky is also going home from Brazil very happy. In Rio he not only won a silver team medal and a bronze on the parallel bars but also asked his girlfriend to marry him.

Swimmer Yulia Efimova is also coming home with some medals. But for the silver-medal winner in the 100 and 200m breaststroke these games were much more difficult than for others. The pre-Olympics jitters (the IOC allowed her to participate only a day before the games after she was initially banned due to two previous positive tests for doping) were succeeded by an unpleasant atmosphere in the pool, where Efimova had to tolerate the booing of the fans and caustic comments from her rivals. Having won her first silver, Efimova started crying on live television, saying that she had not been sleeping for several days because of the tension.

In comparison to the scandals involving Efimova, the words pronounced by American judoka Travis Stevens, who lost the men's 81kg competition to Russian Khasan Khalmurzaev, appear to be the embodiment of the universal principle "sport is outside politics."

Stevens thanked the Russian team for giving him the opportunity to train with them for two weeks and said that Khalmurzaev had deserved to win. "The Russian team has been kind to me. We bleed together. It’s more of a brotherhood," USA Today quoted Stevens as saying.

5. A jump worth zero points

Ilya Zakharov of Russia during the finals of the men's 3m springboard at the Rio 2016 Olympic Games in Rio de Janeiro, Brazil. Source: Alexander Vilf/RIA Novosti

Russia’s participation in the diving competitions in the Rio Games was a disaster, with the awful jumps performed by Ilya Zakharov and Nadezhda Bazhina the most embarrassing moments of all. We can only sympathize with the athletes – for such entry into the water the judges gave them zero points.

Russia's Anastasiia Beliakova is escorted out of the ring after getting hit on her left elbow by France's Estelle Mossely during a women's lightweight 60-kg semifinals boxing match at the 2016 Summer Olympics in Rio de Janeiro, Brazil. Source: AP

We can also sympathize with boxer Anastasia Belyakova, who received a serious hand injury during her semi-final bout with France’s Estelle Mossely. Belyakova was taken to hospital directly from the ring. But the athlete will receive a bronze medal in any case since there are no matches for third place in boxing.

In the men's 50m rifle 3 positions competition, Italian Niccolò Campriani beat Sergei Kamensky only after the last shot. And after the competition he apologized to the Russian shooter, who had had a confident lead in the qualification round. "I don't deserve to win," said the three-time Olympic champion.

In 2012 gymnast Aliya Mustafina tore a knee ligament, an injury after which many athletes can no longer perform. But Mustafina did. In Rio she won gold on the uneven bars, just like she had done in London four years ago. "Any other athlete would have stopped putting up with the constant pain," said Mustafina's coach Sergei Starkin.

In Rio, Mustafina was also the team captain and a real leader and mentor for the younger athletes. The images of Mustafina supporting her teammates Daria Spiridonova and Seda Tukhtalyan have been seen all over the the world by now.