Discover the life of reindeer breeders of the Kola Peninsula 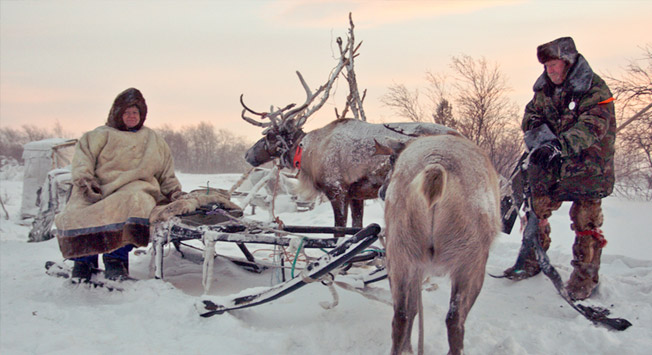 The reindeer herders of Russia’s Kola Peninsula struggle in solitude against the Polar night, the wind and fatigue.

The flat-topped hills and boundless tundra of the Kola Peninsula resemble the landscapes Ray Bradbury describes in “The Martian Chronicles.” This may be part of Russia, populated by Russians, but the local residents live in houses built on sleds and often walk through a wind that blows so fiercely that it can carry a dog away. When they look up, they see a crimson sky – when it isn’t completely dark.

To the east of Lovozero, on the coast, is Gremikha – the “village of flying dogs.” The only way to the village is by water, and only then if the weather is good. In winter, the blizzards and sea storms may keep visitors stuck there for weeks. The strong winds can carry off dogs or small animals, and when the weather is really bad, people have to cling onto metal handrails that line the pedestrian footpaths that run through the whole settlement. Located in the center of the Kola Peninsula, the town of Lovozero, which the younger generation of residents affectionately calls Love-Ozero (“Love Lake”) is the capital of Russian Lapland. The district by the same name is the largest, yet most sparsely populated district in Murmansk Region.

Compared with Gremikha, Lovozero can be called a quiet little hamlet in the tundra.

“We’ve got an apartment in Lovozero, and a house too. But we can’t leave the deer. We go into town around once a month to buy provisions and have a bath,” said Tatyana, a reindeer herder in Lovozero. “Our son Yegor said he’d build us a bathhouse a while ago, but he never managed to. He drowned six years ago.”

Tatyana and her husband Valery live in a small wooden house held together with resin. Jars of canned cloudberries and cranberries line the walls.  When she has to go outside, Tatyana wears a reindeer-skin coat. Reindeer stew is also a common meal for the couple. These visible ties aren’t the only things that bind Tatyana and Valery to the reindeer. They are Komi – a semi-nomadic ethnic minority native to the Russian north, and following the deer is in their blood.

Their friend Misha has other ideas. “Do you know why the reindeer herders don’t want to move back into town? It’s because they know that if they relocate, they’ll hit the bottle. People turn to booze rapidly in Lovozero. Boredom, cold and lack of money – life is tough,” Misha said.

Misha prefers to travel by snowmobile. During the winter, he organizes sledding and snowmobile trips, while in summer, he heads off on treks around the Kola Peninsula. Sometimes he brings tourists to reindeer-herding families, who give the tourists rides on the reindeer for a small fee.

“The tourists come mostly from Russia, Scandinavia and the U nited States – fans of extreme conditions. No one turns up here by accident. Of course, you need to prepare for the trip; not everyone can live in a teepee or ride 13 hours on a snowmobile. But there’s a romance to things here. The landscape here is as though you’ve landed on a different planet,” Misha said.

“The local authorities had an idea for a project called ‘Russian Lapland,’ with a hotel and ski slopes. The whole thing’s gone sour, but we really wouldn’t need much to get tourism started here. If they could only help small business to get started!”

Misha and his brother are also volunteers in rescue searches for people who get buried in snowstorms, assisting crews from Murmansk and Khibiny. “We don’t have a rescue team in our district. People who aren’t from here lose their way. We guide them on snowmobiles,” Misha said. “But the downside is that no one gives us a penny towards the gas or maintenance of the vehicles.”

“Life doesn’t scare me – there are two of us!” Tatyana said. “The only thing is  the dogs – the hunters don’t lock them up at night. A hunting dog can rip a reindeer to pieces. What can two people do against that? Sometimes they come here to restore order, but the next day the dogs are prowling the whole lake again.”

When the reindeer have eaten all the reindeer moss here, the family will pack up and move somewhere else. “Our house is on sleds, the toilet’s on runners, so moving to a new place is not a problem,” Tatyana said. “Except our coal’s buried under the snow and we can’t get it out at all.”

“It’s hard to struggle when you’re on your own,” said Misha. “With reindeer, if the leader flees, then they all flee. If one of them gets separated, wanders off into a corner, then it stops – and eventually comes back to the herd. They spend their time running around until they’re tired, so they don’t freeze. It’s tough for them on their own.”

The mentality of the reindeer seems to have migrated to the population of Lovozero. While few people ever move to the town; few people leave. Something - fatigue, the fear of any other kind of life, the need to stay with others of like mind - holds the population stable for the moment at 2,828 people.

Russian government statistics suggest that there are 47 low-population ethnic minority peoples in Russia, including the Saami and Komi of Lovozero. Many of these peoples are dying out, numbering just a few dozen people only. Most indigenous people live in the Russian north, including Kamchatka, Chukhotka, the Yamal-Nenets Area and Sakhalin. There is a legal framework in place in Russia to protect the rights and way of life of the indigenous peoples of the North. Over the past 15 years, three federal programs have been put in place to help improve the life of native people.

If you never get the chance to visit the Kola Peninsula, you can learn more about the culture of the peoples of Northern Russia and the Barents Sea at Barents Culture website

Hammond Innes “Maddon’s Rock”  begins during the time of the Arctic convoys in World War II and talks about life on the Arctic Ocean.

Another interesting book is “The Murmansk Venture”  by Charles Maynard