Novosibirsk: a city of wind, snow, intelligence and beauty in the middle of Siberia 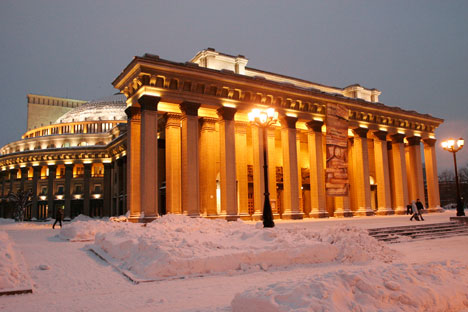 Novosibirsk’s historic city centre is a collection of assorted buildings, almost all of them Soviet-looking. Source: Yury Sovtsov

Novosibirsk is a region in devoid of natural resources. Instead, there are beautiful women and scientists, opera singers and snow sculptures, Chinese chefs and mountains of snow. And there’s no permafrost there either, by the way.

The main thing to bear in mind if you’re heading to Novosibirsk in winter is that Siberians do indeed feel the cold, but they dress warmly even when it’s uncomfortable or unfashionable.

Novosibirsk is Siberia’s cultural and scientific hub. It is Russia’s third-largest city and a pretender to the title of the country’s third capital. It is a city that revels in records: it has the world’s longest metropolitan railway bridge; the longest straight avenue in the world; the biggest theatrical stage in Russia (well, until the Bolshoi Theatre re-opened in Moscow); and much more.

Yes, it’s pretty cold there. The temperature records don’t mean anything here – it can get down to minus 45 degrees Celsius in Novosibirsk, but then it can hit minus 55 in Yakutsk. But Moscow’s minus 20 still feels colder, because of the moisture in the air. This may be true, but it matters little. Minus 30 degrees in Novosibirsk is still horribly cold.

The city was built on the Siberian Steppes at the beginning of the 20th century and thrived during the Stalin era, meaning broad avenues, colossal public squares, heavy snowfall that accumulates in snowdrifts in the wind shadow of buildings, and biting wind.

You have to dress like a Siberian here: numerous layers, a windproof down jacket or fur coat, warm boots, ski pants and a choice of either thermal underwear or old-style long-johns. Inured urban tourists can try to ignore it by moving around in short, calculated dashes – from the taxi to the bar, the bar to the cafe, the cafe to the opera – but the howling blasts from the steppe seem to make the distances between buildings gigantic, and there’s a strong temptation to have a tipple too many.

If you are still set on taking a walk, you can start from Novosibirsk Main Railway Station and walk down Station Main Street to Lenin Square and Red Avenue. In addition to its majestic appearance and a full range of modern amenities, Novosibirsk Main Station happens to have excellent acoustics. Music is often heard resounding within its arches. You might hear violin concertos or church choirs as part of the traditional Easter Festival.

Novosibirsk seems to have more than its fair share of beautiful women – tall shapely blondes with slightly narrow eyes, no one really knows where did they all come from. Locals are blasé about it, and it’s only those from neighbouring cities who seem to notice, where they don’t seem to have so many.

It’s certainly a divine compensation; as well as the large quantities of beautiful girls and snow, Novosibirsk has a colossal opera theatre with top performers, enormous railway yards, a beautiful bridge across the Ob River, a monument to engineering achievement in Tsarist-era Russia, the University, and Akademgorodok, a huge educational and scientific campus suburb with laboratories, research centres, residential areas and an excellent infrastructure.

The Novosibirsk Region is practically the only region east of the Urals that does not have oil, gas, diamonds, gold reserves, iron ore or other valuable mineral resources.

No plans to go to Siberia, but still want to see it?

Your best bet is to watch Long Way Round, a documentary with Ewan McGregor and Charlie Boorman riding motorbikes around the world. Their journey across Siberia was a long but happy one. Of course there’s no snow in the film, as motorbikes aren’t built for winter. But there are the immense open spaces, dreadful roads, endless larch tree landscapes, the South Siberian steppe and the rather-too-similar Kazakh steppe too. Those who really love documentaries can also get hold of the book of the series. It is well worth a read too.

The most remarkable film about these parts is Akira Kurasawa’s Dersu Uzala (Dersu the Trapper), a joint Japanese-Russian adaptation of Vladimir Arsenyev’s novel that tells the story of how a Russian explorer befriended a local woodsman named Dersu Uzala, and their journey together through the Ussuriysk taiga wilderness. Of course, that’s not exactly Siberia itself, but rather the more easterly Russian Far East, where tigers and leopards compete with bears – but they still have snow up to their eyeballs in winter. The film won an Oscar in 1976, as well as First Prize in the Moscow Film Festival, the David di Donatello Award, and lots of other nominations.

Novosibirsk’s historic city centre is a collection of assorted buildings, almost all of them Soviet-looking. There’s an overwhelming predominance of grey concrete, despite the amount of advertising and scattering of modern mirror-glass office buildings. St Alexander Nevsky Cathedral – the first stone building in the city – has now been dwarfed by the newer buildings that surround it. The city’s original trading houses have had a luckier fate; they stand on the central square in a fine state of preservation. On the self-same square (it is, of course, Lenin Square) is the city’s most famous building – the Opera House.

Anyone with even the vaguest knowledge of Novosibirsk has heard of the Opera House. It’s a gigantic structure topped by a scaly dome, somewhat reminiscent of an ancient circus, mosque, observatory, or even a stranded flying saucer. Lenin looks on from nearby, dressed in a heavy cloak and accompanied by five armed men looking menacing. Locals call this peculiar grouping “the partisan’s right boot”. The boot, incidentally, is almost the size of an adult person – authentic Siberian proportions.

One of Novosibirsk’s special sightseeing attractions is its zoo, possibly the best in the country. It’s a place, just like in heaven, where love conquers all. The fox doesn’t eat the chicken, but is instead its friend. The lion and the tigress have children who are ligers, while leopards of the rarest known kinds hold Tiger and Leopard Days. Local city folk are understandably proud of the zoo.

It’s a city without any outlandish exotica, a real European city – and there are no bears wandering the streets. This also means there are few specially-organised winter events. There are snow sculptures. Some of them are located by the Exhibition Centre in the outskirts of the city and are dedicated to the Olympics. Others are on the main city square and represent the cities of Siberia. You can go to the opera, which opened here during WW2, when the Leningrad Opera was evacuated to Novosibirsk. Many performers never returned home to Leningrad after the war, and instead kept the traditions of the Mariinsky Theatre alive here in Siberia.

There are numerous bar and grills and Chinese restaurants to go in the evenings. The local Chinese here serve great food, while the bar and grill restaurants offer the chance to meet some of the local girls who are still sober enough to join in a chorus of Russian songs.