Eight of the best clubs in St. Petersburg 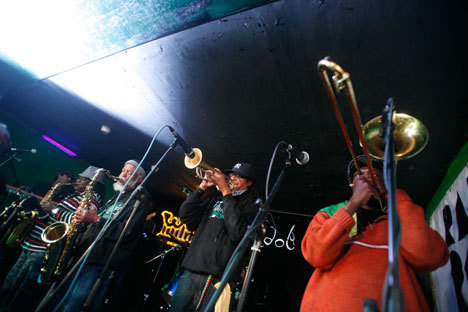 They don't call St. Petersburg Russia's cultural capital for nothing. St. Petersburg is where Russia's first rock-club took off and has been the main launch-pad for Russia's rock musicians. It is also the city that hosted the first Russian raves. Here is a quick overview for foreign visitors wanting to sample St. Petersburg's nightclub life.

Griboedov can fairly be called the Petersburg club that is most well-known beyond St. Petersburg – none of the other clubs can boast the rich history this club has. Griboedov has been running since 1996. It is the legend of the St. Petersburg underground, housed in an underground bomb-shelter. These days it's a real culture-dive, with exhibitions, gigs, DJ appearances, pre-arranged and ad-hoc music gatherings, lectures, and banquets. There are daily performances by local independent groups in every possible musical genre – from funk and soul to rock and indie. The upper floor, built above the bomb shelter, features a restaurant.

Songs at your table

This club has been a major city landmark for nearly 10 years. The secret of its success is in the unusual concept – they celebrate New Year here every day of the year! Bearing in mind that New Year is Russia's biggest holiday and regularly celebrated with a week of every possible kind of festivity, it is easy for this to sink into extraordinary debauchery. It is an absolute must for tourists. If you celebrate New Year at Purga and still have energy left, then pop in at the Purga-2 club – where they have a wedding every day instead. You can even take your turn at being the bride or groom.

The first XXXX bar opened in St. Petersburg in 2005 and has blossomed into a chain of venues that now includes 9 different bars. It is very possible that XXXX is the most well-liked club brand in St. Petersburg, with a very wide and diverse public. The owners themselves say their main job is offering the best night out (without frills) for guests over 30. If you want to see how St. Petersburg's businessmen, office managers and their partners have fun, beat a path to XXXX. There are frequent gigs performed by famous Russian musicians. The music policy follows likewise – radio hits of the last 30 years.

If you fancy yourself a hipster, or if you at least know who they are and look favorably upon them, then Dom Beata (Soviet home workshop) is the place for you. One of St. Petersburg's most successful and fashionable nightlight spots in recent years, this is a venue opened by the owners of the big-name Moscow club “Solyanka.”

By day, Dom Beata operates as a cafe – and actually a pretty good one – but, after darkness falls on Fridays and Saturdays (and sometimes on other days too), it becomes a nightclub. Here guests can often see live acts, among whom are found performers like Nikolas Jaar, Joakim, Move D, or Todd Terje. The prices are above average for St. Petersburg, but still pretty acceptable – beer for $5-7, cocktails for $9.50. The design here is classic Soviet interiors – from the furniture to the tableware.

Bouncers often at the door, but free admission. Average dinner prices at €40 for two.

Jesus opened around a year ago and quickly became one of the most interesting locations on the Petersburg club circuit. Jesus is aimed at fans of techno and house, of which there are plenty in St. Petersburg. There are two dance floors, two bars, and an exhibition area. At this venue, there are old hands of the club scene who remember the 1990s, right alongside the brightest young DJs. Outside there are strict bouncers and a well-managed dress code. Inside, the scene is often full of musicians, media personalities, and young attractive partygoers.

Techno fans will want to head to one of the newest places on the block – Don't Panic, which local fans have already claimed is Berlin-style due to its minimalist interior décor, heavy music and underground atmosphere. The owners claim that the soundsystem at the club is equivalent to a fighter jet flying just 165 feet overhead.

The repertoire here stretches to more than 5,000 songs – from ABBA and Johnny Cash to Talking Heads and New Order. More importantly, guests can order a song for free. The crowd is usually a mix of pleasant young locals, foreigners, and a lot of girls. The prices are more than affordable, and there are always different special offers.

Fidel is one of Dumskaya's long-established hangouts that have already become practically legendary. Here it is always dark, crowded, and major fun. The crowd tends to be creative and bohemian, students, fashionable urbanites, and foreigners. Drunken dancing and newly made friendships are almost certain. At five-minutes-to on every hour you can get a shot of cranberry hooch for €1 ($1.35). The rest of the prices are not too terrible either, even for the most spent-out of visitors.

For the last couple of years Dumskaya street has become the main bar hangout of Russia's northern capital – a kind of miniature version of the famous Las Ramblas in Barcelona. For those who are short on spare cash for taxis or who have nowhere in particular to be, then Dumskaya street is a great place to spend an evening wandering from one bar to the next. From our editors, here are a couple of the best places to visit on Dumskaya.