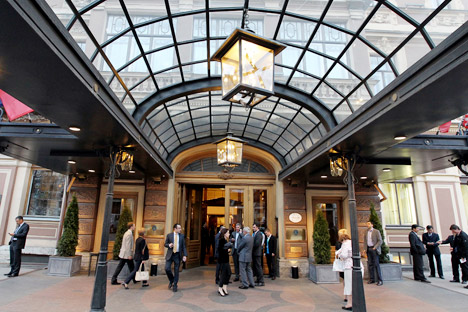 Patricia Yates, director of strategy and communications with VisitBritain, tells RBTH how Britain is cooperating with its Russian partners in tourism.

RBTH: Why is the Russian market important for British companies?

RBTH: What is the growth potential of the Russian market?

P.Y.: We have a long-term ambition to grow the numbers from the Russian market by 75 percent by 2020. We see a market that has good growth potential. We saw good growth in 2011. We’re seeing some growth in 2012, which was a difficult year for tourism: because hosting the Olympics means your normal tourism patterns are upset.

RBTH: How can you reach the 75-percent-growth target?

P.Y.: What we know from doing research is that two-thirds of Russians who saw the Olympics on television are more likely than not to come to Britain. The real legacy of hosting the Olympics is that you have the showcasing of Britain during the Games, and then you’re trying to convert those viewers into visitors.

Also, EasyJet is coming in here soon and will be running a route from Moscow to Gatwick — and also from Moscow to Manchester — which really opens up different areas of the country, because you’ve got Manchester, Liverpool, the Lake District and Scotland… So it enables Russian visitors much more easily to get to the north and to Scotland.

RBTH: What attracts Russians to Britain?

I know Russians enjoy going to museums and theatres. They also enjoy going to the pub, and they love going shopping. So, if you look at the mix of things we have on this mission… We have those who do theatre tickets, we have the Royal Shakespeare Company, we have Keith Prowse, who are offering tickets to Wimbledon, as well as the Wimbledon Museum itself; and, on shopping, we have big names like Harrods, Fortnum & Mason and Bicester Village.

“We’ve seen a 10-percent increase in visitors last year, which is wonderful. Russia is our 12th biggest spending market. They spent £232 million [$363 million] last year in London, which was a change of 93 percent, year-on-year. We have 1,000 partners in London, like restaurants, attractions, hotels… What we do is we recommend those partners to our clients. We help them get in touch with the relevant people, so they don’t have to look randomly.”

RBTH: Are there new opportunities for cooperation between Russia and Britain?

P.Y.: There is a real fellowship of Olympic hosts, so we have handed over to Sochi and Brazil. What Britain did around the Olympics was a real drive for tourism and for business links. We signed a memo of understanding with the Russians to pass on the expertise in developing tourism, so that Sochi could mirror that and learn what we’ve done well and what lessons we’ve learned.

RBTH: What prospects do you see for Russia as a tourist destination?

P.Y.: I think, for us, Russia is still an exotic country; so, coming to Moscow, we perhaps tend to see the images of Red Square, St. Basil’s Cathedral and the Kremlin. A real fascination with Russia is that it changes and opens up and showcases the depths of history. Globally for cities, it’s the culture and heritage that attracts people to go and visit; and I think Moscow and St. Petersburg have a particular appeal, because they have that in real depth and because they are not so well-known.