The history and craft behind Orenburg shawls 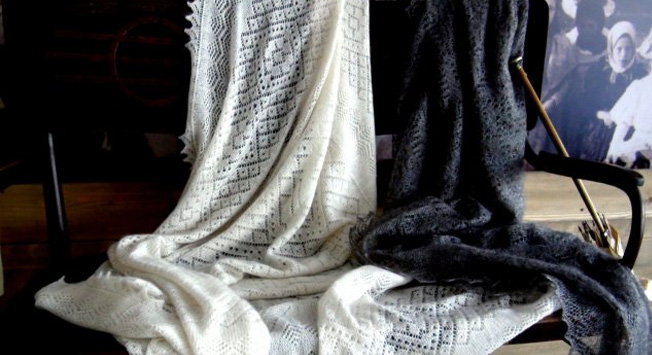 http://art.ufanet.ru
The history of the creation of the shawl really goes back to the unique breed of goat found in the Orenburg region, which has both firm and soft down. The local goats have long since adapted to the harsh winters with snowstorms and very low temperatures. The goat’s hair is 17 micrometers thick, which is four times thinner than human hair and 1.5 times thinner than the hair of an Angora goat.

The trade in goat fur began around 250 years ago. By the middle of the 18th century, downy merchandise from Orenburg had attracted the attention of researchers, as well as the new inhabitants of the region—the Yaik Cossacks, who settled in this garrison city.

Visitors first and foremost were taken aback by the ability of the local population—the Kalmyks and the Cossacks—to survive even the harshest of frosts (which here could go down as far as 40 degrees below zero Fahrenheit) in clothes that, at first glance, appeared so light. Soon it was discovered that everything in these silky down garments was lined with goat fur. The Cossacks began to trade these fur shawls with herdsmen for tea and tobacco. In time, the Ural Cossacks even changed the weaving pattern: Instead of a dense pattern, they introduced elements of lace making and knitting.

It was in this form that Orenburg shawls and other merchandise gained notoriety that was truly cosmopolitan. The shawls were first exhibited at an international exhibition in Paris, in 1857. They only gained recognition, however, at the sunset of the Russian Empire, at the end of the 19th century, when they began to appear in England with the label “Imitation Orenburg Shawl.” The genuine shawls were far from cheap.

Production of goat fur shawls, influenced by high prices and increasing demand, began to grow very rapidly at the end of the 19th century: In 1910, more than 20,000 people were engaged in knitting shawls.

There are only a few different types of Orenburg shawls—the basic, the spidery lace or the palantine. The two latter types use a fine, drawn thread with a complex pattern. They are not used to keep you warm, but for decoration. The best weavers for these shawls live in the villages of Zhyoltoe or Shishma.

Despite the large size of the spidery lace (the standard size is 210 x 210 centimeters), it is easy to dispatch. They can be placed in the shell of a goose egg or passed through a wedding ring, for example; one century ago, this method was used to check if a shawl was genuinely Orenburg or not. Silky thread is essential for these shawls (2/3 down and 1/3 silk), and it takes one month to make one of these shawls by hand.

Shawls are not always made by hand, however, as there are several factories producing shawls in the Orenburg region. These shawls, which are machine woven, are often cheaper, but the knit is not so fine and they do not have a unique pattern.

Orenburg weavers themselves create the designs that are woven into the shawls. The patterns are all different and, as a rule, they are given traditional names—“Yolochka” (herringbone pattern), “Koshachi Lapki” (catspaw pattern), “Kruglaya Malinka” (raspberry pattern), “Shashechki” (checker pattern), and so on.

Depending on the complexity of the knit and the size, the price of one of these shawls can vary from $135 to $1,050. Hand woven shawls only come in natural colors: white, dark brown and grey.