Russian cyclists visit US during their world tour 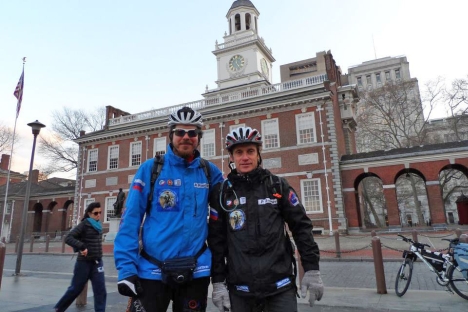 Two Russian cyclists are three months into a journey that will take them around the world to commemorate the centennial of Onisim Pankratov’s 1913 world tour.

Pavel Grachev, 47, is a history teacher and Alain Khairullin, 26, a computer engineer, but recently they haven’t been spending much time at work. The two men spend all day on their bikes and spend their nights camping with gear they carry themselves.

Over the past few months, they have set up their tent in a forest in France, spent the night in an abandoned hotel in the snowy Austrian mountains, and busked for a few extra euros in Italy. They are following the example of Onisim Pankratov – a Russian cyclist who in 1913 became the first to travel around the world on a bicycle.

Grachev and Khairullin began their 13,000 mile journey from the city of Kazan in November. They expect the trip to take nine months. After covering 4,600 miles in Europe, they began the North American leg of their tour on Feb. 5.

Starting in New York, Grachev and Khairullin will ride to Washington, DC and then through Tennessee and Arkansas en route to Dallas, Texas. They will then turn south, riding almost to the border with Mexico before heading west. They plan to arrive in Los Angeles, California, by the end of March. After that, they will journey to China and ride through the Russian Far East before arriving back in Kazan in time for the start of the Universiade on July 6.

This is not the exact route taken by Pankratov; he started and finished his journey in Harbin, which is now part of China. Pankratov worked as a fireman, but was active in many sports. After he read that the International Cycling Federation would give a prize, a diamond palm, for the sportsman who was the first to bike through Europe, he decided to take up the challenge.

In 1911, Pankratov began his European journey, but he didn’t stop there. He decided to ride across the American continent, too. It took him 2 years to complete the trip around the world, partially because he had to stop along they way and take odd jobs in order to raise funds to continue the journey. Pankratov died at the age of 28 while serving as a pilot in World War I.

Fortunately Grachev and Khairullin do not have to take time out from their trip to earn money. Their journey is supported by the local government in partnership with the organization Drug-Free World. The sport of cycling has been plagued recently by doping scandals, and one of the goals of this trip is to attract attention to a healthy life style that doesn’t involve drugs.

“From all types of fitness, cycling is one the most beneficial one, surpassed only, may be, by swimming. When running, the impact goes to the joints and it can be damaging, but cycling creates a smooth movement and trains heart,” said Khairullin.  “The only thing is that the shoulder girdle is not strongly involved, but abdominal part and almost all the rest of the body gets a good workout.”

Although the support the team received covers their tickets and some expenses, they often have to find a place to stay by themselves. Sometimes they use the social network CouchSurfing, sometimes they stay with friends and sometime they just pitch a tent wherever they can find a place.

One especially cold night in the mountains of Austria, the team decided to stay at a hotel they happened to be passing for the night. The hotel’s door was unlocked and the heating in the building was on, so the travelers let themselves in and looked for someone from whom to rent a room. But no one answered their calls, and after long hours of cycling, they fell asleep in the lobby. Only a few days later they learned that the hotel was closed – since it was between tourist seasons – and someone must have forgotten to lock the door.

A few days before Christmas, the sportsmen found themselves in Milan. While riding through the streets, they saw a choir singing beautiful carols and decided to give them some coins. Then, Grachev and Khairullin decided to sing a song for the Italian people as well, and the singers liked the song so much that they decided to give the coins back to the travelers.

On their trip, Grachev and Khairullin have learned how cycling is organized in other countries, and they hope to bring the best practices back to their hometown of Kazan.

“In Vienna they have bike roads alongside all roads and parking for bikes is everywhere,” said Khairullin, adding “Poland was the most comfortable country for us. On the couchsurfing website we got many invitations to stay with people. Very welcoming country and the roads are good there.”

“But,” Grachev added, “the most polite drivers are in Spain.”

“When we were pedaling, they would smile and show thumps up. Even though we were going on the highway,” said Khairullin.

You can follow the progress of Grachev and Khairullin at the web-site.