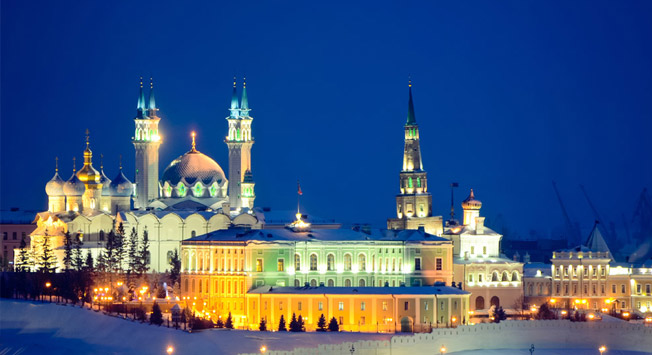 Old guidebooks to the recently transformed city of Kazan are virtually useless now. RBTH helps travelers discover this latter-day third capital for themselves, from the ancient mosque and a most fantastic gothic building, to a Mayakovsky-themed restaurant and Lenin’s alma mater.

In 2005, Kazan celebrated the 1000 th anniversary of its founding. The city gave itself heaps of presents and became a real tourism capital of Russia.

In fact, the Kazan mayor’s office promptly patented the brand name “Third Capital of Russia” for the nominal sum of 40,000 rubles (around $1,330) and secured this honorary position after Moscow and St. Petersburg.

The city changed so much after the anniversary that old guidebooks to Kazan can be thrown away. Now, RBTH helps travelers discover this latter-day third capital for themselves.

The best place to start your route is at Kremlyovskaya metro station, which is right next to the Kazan Kremlin . The local residents say the city’s metro was “built for people who aren’t in a hurry to go anywhere” — just one line and two trains that arrive at the station every 15 minutes. In fact, mainly tourists use this form of transportation in Kazan.

The station interiors are a match for Moscow’s, and it costs $0.50 (€0.40) per trip. In the Kazan Kremlin (declared a UNESCO World Heritage Site in 2000), apart from its numerous towers and churches, it is worth taking a look at the Kul Sharif Mosque and the “leaning” Söyembikä Tower.

Legend has it that a Tatar princess threw herself from the top story of the tower on the orders of Czar Ivan the Terrible — her husband-to-be and conqueror of the Kazan khanate. The tower is “leaning” with the same inexorable speed as its counterpart in Pisa.

After the kremlin, see the Ministry of Agriculture building (also known as the “Palace of Agriculture,” located at ul. Fedoseyevskaya, 36) that stands nearby. Looking at it, you would think the architect had gone mad: there is nothing as fantastic as this in all of Russia — an enormous building with colonnades, domes, griffins, bas-reliefs, mirror-glass, and a concrete tree in an archway in the middle.

The university where Vladimir Lenin studied is situated not far from the “Palace of Agriculture.” Here you can sit by the monument to the leader of the proletariat and listen to stories about how he used to skip lectures. He was not the only one, by the way: the writer Lev Tolstoy and the poet Velimir Khlebnikov also skipped lectures at Kazan University.

You can have dinner on ulitsa Baumana (Bauman Street) — Kazan’s equivalent to Moscow’s Old Arbat or Barcelona’s Ramblas. Among the multitude of cafes and restaurants, take a look at Dom Tatarskoy Kulinarii, at ul. Baumana, 31 or the low-budget version on the other side of the street, Dom Chaya .

Both establishments serve the traditional tartare (minced raw meat), “gubaidia” (a special pie made with beef) and, of course, “chebureki” (pies filled with minced mutton or veal that are famous throughout Russia and beyond). Both places have almost identical menus, the only difference being the prices and, perhaps, the interior décor.

A concert at the Mayakovsky Yellow Jacket restaurant club (ul. Mayakovskogo, 24a) is a great way to end the evening. Well-known underground groups come here from across Russia, and the names of the dishes and drinks are inspired by the works of Soviet-era poet Vladimir Mayakovsky.

Thus, here you can order “Patience from Aunt Sonya,” a “Cloud in Trousers” drink, or a “Tatarstan flag” — don’t worry about asking what these ambiguously named dishes actually are. An evening at the Mayakovsky will cost you $20–33 (€15–25).

10 p.m.: Something sweet for breakfast

Breakfast at the Lakomka café (ul. Karla Marksa, 50) will put you in an excellent mood for the rest of the day. People used to line up here all night for cakes. The secret of their especially tasty baking is a real Russian stove. At one time they wanted to replace it with modern professional equipment, but they had second thoughts just in time.

This is a real paradise for lovers of good coffee and all things sweet: the melt-in-your-mouth Tatar dessert called “chak-chak,” made from pastry and honey, with little cakes and biscuits, will cost you $4–9 (€3–7).

When you leave the café, you can take a stroll along Kazan’s non-traditional tourist route — from ulitsa Karla Marksa to Bolshaya Krasnaya Ulitsa, and on to ulitsa Lva Tolstogo. The Suvorov Military School and the old merchants’ houses made from wood and red brick are as impressive as anything in the city’s tourism “Meccas.”

1 p.m.: A stroll along the embankment

Ulitsa Lva Tolstogo (Lev Tolstoy Street) will lead you to the River Kazanka embankment. Since the reservoir was built, this river has become a wide expanse of calmly flowing water with an average width of 0.6 miles. The embankment starts at ploshchad Tysyacheletiya Kazani (Kazan Millennium Square), which is one of the biggest squares in Russia.

The views from the square of the Kremlin, the Kul Sharif Mosque and the futuristic “flying saucer” of the Kazan Circus are regarded as the city’s trademark. In the middle of the river stands an ancient church, built as a memorial to the soldiers who died on October 2, 1552, when Ivan the Terrible captured Kazan. It was founded in 1811 and stands on a small island surrounded by water.

3 p.m.: The oldest mosque in Tatarstan

Travel one stop on the metro, from Kremlyovskaya station to Ploshchad Tukaya station, to visit the ancient al-Marjani Mosque (ul. Kayuma Nasyri, 17). You will receive a warm welcome and be taken on a short tour that is completely free of charge. Don’t forget that, when you go into a mosque, you have to take your shoes off — so it might be best to make sure your socks match.

Not far from here, almost an entire district is home to Turkish students who study the Koran here, paid for by the Turkish government. The Tatar and Turkish languages can be heard here much more than in other parts of the city.

If you want to grab a bite to eat, drink some tasty tea and stock up with souvenirs, you need to pop into the Ebivol gallery, situated not far from ulitsa Parizhskoy Kommuny (Paris Commune Street). This is a gallery where you can buy pictures by Kazan artists; there is also a tea shop and the Altyn Ay workshop, which specializes in Islamic and Tatar clothes. These gifts range in price from $26 (€20) for a belt or purse to $133 (€100) or more for a full Tatar costume.

If you were thinking of bringing some edible souvenirs back from Tatarstan, go to one of the many shops in the Bahetle chain: you will find one on every corner here. At Bahetle you can buy real Tatar groceries that are used in Tatar national cuisine, as well as small souvenirs for the home. The prices will be a little higher than in ordinary supermarkets, but so will the quality. By the way, there are supermarkets like these in Moscow too.

5 p.m.: Dinner at the racecourse

You can dine in style at the Zolotaya Podkova restaurant at the Kazan racecourse (ul. Patrisa Lumumby, 47a). Dinner here is so popular that it is best to reserve a table in advance. Dinner for two will cost about $40 (€30). Entry to the Kazan racecourse is free. Wherever there are horses, you will find special services.

At the racecourse you can book a ride around the city in a carriage or a white horse for special occasions — for example, for a romantic proposal of marriage.

While Russia is preparing for the Olympics in Sochi, Kazan is getting ready for the Universiade-2013. The “third capital” is also competing for the title of capital of youth sports. Entry to the Basketball Hall, where Kazan’s Unics team plays, is free. For entry to the TatNeft Arena, where the Ak Bars ice-hockey team plays its home matches, there is a nominal charge of $1.33 (€1).

The old ice stadium hosts figure-skating competitions, and there is indoor skating for everyone interested in each district. It costs just $4 (€3) for an hour of skating, including rental skates.

Sunday is a great day for taking a short trip out of town. RBTH suggests that travelers visit Sviyazhsk — a unique monastery and town on an island.

The town on an island

Ivan the Terrible founded Sviyazhsk after taking Kazan: it became a strategically important point for the Russian army when it was subduing the Kazan Khanate.

Today, Sviyazhsk is a settlement which boasts four monasteries and numerous Orthodox churches. The village is on an island that is linked to the shore by a causeway on which a road has been built. Thus, you can get there by bus or by any river transport from the Kazan riverboat station. However, it is better to book a tour (for example, here ).

On a tour, you are bound to be told about the monument to the victims of political repression, the murder of Archbishop Ambrose by Soviet Bolsheviks, and the legendary monument to Judas (“the man who fought Christianity”), which either was or was not erected on the orders of Vladimir Lenin.