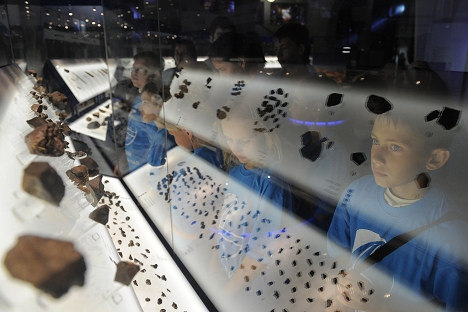 Even a fragment of a meteorite can range from $400 to several hundred thousand dollars. In Russia, finder’s fees are put up by the Academy of Science. Source: RIA Novosti / Grigory Sysoyev

The meteorite that fell to Earth in Chelyabinsk Region is not the first. Many sites in Russia where meteorites fell remain undocumented, and the majority of humankind has no idea they happened at all. RBTH showcases a selection of the best-known meteorite showers in Russia.

The meteorite that fell to Earth in Chelyabinsk Region landed in a lake just over half a mile away from the town of Chebarkul. However, many sites in Russia where meteorites have fallen remain undocumented, and the majority of humankind has no idea they happened at all.

Every year, around 1,000 celestial objects — totalling around two tons if added together — reach the Earth’s surface. Despite this, some particular, localized meteorite showers have been observed by tourists and meteorite-hunters over the years.

RBTH showcases a selection of the best-known meteorite showers in Russia, whose geographical coordinates are open to anyone who fancies a chunk of a “heavenly body.”

For some time now, the known locations of meteorite impact have been called “meteorite fever” — it frequently happens there are so many fragments of a meteorite shower that they go uncollected for ages.

For nearly a century meteorite scavengers have been scouring the Siberian taiga forest in search of “celestial debris.” However, it’s not just Siberia that is worthy of your attention if you plan to set off in the quest for heavenly bodies on Earth.

The Sikhoté-Alin meteorite fell to Earth near a village called Beitsukhe (later renamed Meteoritnoye), in the Ussuriysk Taiga of Primorsky Region, landing in the Sikhoté-Alin Mountains of Russia’s Far East on February 12, 1947.

The meteorite broke up while entering Earth’s atmosphere and fell as a ferrous metal shower over an area of 13.5 square miles. One-hundred and sixty impact craters were found at the head of the “scatter ellipse,” each with a diameter between 3.3 feet and 91.8 feet.

The depth of the largest crater was 19.6 feet, making the meteorite itself one of ten largest to have struck Earth. Far from all the fragments have been located, and many have been found in tree-trunks — so no need to crawl through the undergrowth with a metal detector.

As well as this one, the Sobolev Crater is also in Primorsky Region, formed around 1000 years ago and measuring 173.8 feet across.

The first meteorite fragment finds were made in 1912, in the Elegest Reaches of the Urgailyk-Chinge River by the Vostoiny Tanu-Ola Ridge. Alluvial gold had been found in the river’s upper reaches, attracting prospectors to the “Tuvan Gold Rush” of the early 20th century.

The huge hunks of nickel-iron found by the gold-panners were fragments of cosmic origin — one of the gold-mines along the Chinge River was renamed “Meteorite.” Meteorite finds on this river continue to this day.

A meteorite fell on the eve of the Battle of Borodino, landing in the location of a Russian artillery battery in positions near Gorki Village. The meteorite was long kept by the family of the battery commander, A. I. Dietrichs, and was only donated to the Russian Academy of Sciences by his relatives in 1892 — eighty years after the Battle of Borodino itself.

The fall of the Tsaryov Meteorite, which weighed 2,700 pounds, was observed in 1922. However, the fragments were not discovered until they turned-up during plowing on the Leninsky collective farm in 1968.

The first report of the find was only made 11 years later by an electric welder named Boris Nikiforov.

Today, around 80 pieces of the Tsaryov Meteorite have been identified. Many are in private collections, but the majority are in Moscow at the Russian Academy of Sciences. They vary in weight, from 1.7 ounces to 623.9 pounds. Tsaryov ranked third by size and weight in mankind’s history of meteorites. People continue to search for its pieces.

Tatarstan is home to Russia’s largest meteorite crater — the Karlinsky Crater — with a diameter of 6.2 miles.

The crater is around 5 million years old and lies to the west of Buinsk, which borders the neighboring The Chuvash Republic.

Only four meteorites have ever been found in Tatarstan. Kainsaz is the largest, falling on September 13, 1937 in Musliumovsky Region. The impact took place near the village of Kainsaz.

This extraordinary event was witnessed by several locals. The meteorite would have weighed 462.9 pounds.

Meteorite hunters began mass forages in the Kainsaz village area only toward the end of the 20th century, and large chunks are still there for the finding.

The meteorite shower which Chelyabinsk endured on Feb. 15 was not the city’s first.

On July 11, 1949 a meteorite shower bombarded an area of 74.9 square miles of the Chelyabinsk region. All that was subsequently found were 20 fragments, totalling 440 pounds in all.

The Kunashak Meteorite was only 720 million years old — a relative youngster.

This is as compared to the meteorite’s fragile outer crust, which must have disintegrated as the meteorite fell through the atmosphere.

No fragments of the Tunguska ‘meteorite’ have ever been found, and its origins remain one of the most hotly-discussed topics around the scientific community. A fireball appeared over the basin of the Yenisei River in 1908.

Its flight ended with an explosion at an altitude of around 4.3–6.2 miles above an unpopulated area of the taiga forest. The blast wave registered with observatories all over the world, including some in the Western hemisphere.

The explosion felled trees for a circumference of more than 1,242 square miles, and glass was shattered for several hundred miles from the epicenter of the explosion.

For several days, an intense glow in the sky and glowing clouds were observed over an area extending from the Atlantic to Central Siberia.

A plethora of explanations for the origin of this extraterrestrial phenomenon have been advanced, from the unplanned side-effects of an experiment by Nikola Tesla, to a comet impact. The regional administration of Krasnoyarsk has set up tourist routes to visit the location of the epicenter, even hoping that foreign tourists might come for a look.