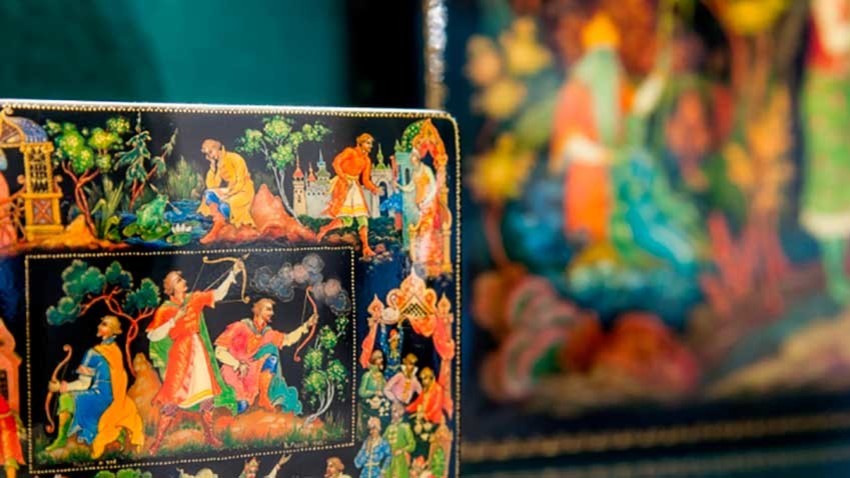 Examples of Palekh's painted miniatures. The style of Palekh painting springs from the traditions of the ancient Suzdal and Moscow schools of icon painting (15th-16th centuries).

Evgeniy Ptushka / Strana.ru
In dire need of state funding, the unique craft mastered by Palekh artists is dying out. Artists from Palekh are famous for popularizing illustrated Russian folk themes abroad. The artists, who in the early 20th century switched from painting icons to producing lacquer boxes, are now returning to religious art or creating cheap imitations.

Although the village of Palekh is only 250 miles from Moscow, it takes as long to drive there from the capital as it would to fly to Beijing: about 9 or 10 hours. With a population of 6,000, Palekh boasts some 600 artists, and the secrets of their art have been passed down from generation to generation.

The village appeared in the 15th century. Gradually, along the banks of the picturesque Paleshka River, grew a settlement inhabited by icon painters well known to the tsar’s court. They painted beautiful icons with countless details — “all the little things.”

Their work can be found in the churches in the Moscow Kremlin and in the Trinity Monastery of St. Sergius. In 1882, the Belousovs, a Palekh family of icon painters, decorated the Faceted Palace in the Kremlin.

After the Bolshevik revolution of 1917 icon painters were forced to find other applications for their talents. They decorated wooden spoons, nested dolls (“matryoshkas”), boxes, dishes… All of this was in danger of dying out, but the artists managed to adapt and develop a new style.

At an exhibition in 1923, the Palekh cooperative showed several of their small wooden boxes and dishes decorated with motifs from Russian folk songs. The Palekh painters were the first to draw the famous Firebird and to illustrate “Pushkiniana” (fairytales and poems written by Alexander Pushkin).

The result was a genuine renaissance. The work of the Palekh masters began to be exported, bringing the Soviet state hard currency. Their work even won prizes at the World Expo in Paris. In 1928, they began training new young artists to replace the old masters. In 1935, the Palekh Museum was created: a priceless collection of icons, lacquer miniatures, drawings, and paintings.

“The technique of preparing these boxes from papier-mâché is a long and laborious process,” said Viktor Paramonov, a hereditary artist and chairman of the Palekh Artists Association. Today, Paramonov supervises the work of some 120 artists as they create new lacquer miniatures.

“The work is all done by hand. Each box must be oiled, primed, caulked and painted with black lacquer on the outside, red enamel on the inside — then dried and decorated," Paramonov said. "In Palekh we do not make copies; every box is unique. The final polishing is done with the palm of the hand, which makes the work truly unique. A miniature cannot be enlarged; therefore the artists use magnifying glasses."

But we have no orders from the government. Any benefits are ephemeral and selling our goods is a problem. Palekh fakes comprise 80-90 percent of the market. The law against piracy doesn’t work. Souvenir shops buy things from artists that have not passed muster with the experts. What do they do with people who make counterfeit money? They imprison them. But for a counterfeit Palekh box they don’t,” said Paramonov with evident irritation.

View the gallery: To zoom in on Palekh miniature painting

This year the Palekh section of the Russian Artists Union turns 60. An exhibition is in the works. However, the chairman of the local section, State Prize laureate Vasily Makashov, worries that there may be nothing to exhibit. The old masters are all but gone; only five remain. The young artists are joining brigades and going away to paint the interiors of churches, returning to the work of their ancestors. Icon painting is in demand today, but on a primitive level.

A lacquer box by a renowned artist can fetch up to a million rubles ($33,000) from collectors. The state today — as in Soviet times — places no orders for Palekh boxes. Last year, the Palekh Artists Association had one applicant for work: a young man who could not agree to wages of 5,000 rubles a month ($167). One can understand him.

“Today, every tenth resident of Palekh is a graduate of the Palekh Art School," said Mikhail Belousov, director of the art school. "There are only two schools of this kind in all of Russia. Every year 16 students graduate. But there are fewer applicants. One has to travel around the region and drum up new interest."

"There are also fewer students from hereditary families of artists — and no one at all from the cities," he added. "It’s a different mentality. The main thing for us, I think, is to preserve the art, not to descend to the level of souvenirs. To raise the level of our specialists, then let them raise Palekh back up.”

Not far from the center of Palekh is an enormous hangar whose floor is covered with wood shavings. In the middle of the hangar is a wooden construction which will soon acquire fretwork. The Palekh Iconostasis Workshop is the largest employer in the Palekh district.

The only way is to get by bus from Ivanovo. Buses run approximetely every half an hour and take about two hours. The final destination can be Yuzha, Pestyaki, or Puchezh. Round-trip ticket costs 5 eu.

There are thoughts of building a cultural-entertainment complex next to the art school, with restaurants, cafes and a Palekh souvenir shop. Christmas tree ornaments decorated by Palekh artists and lacquer boxes decorated with pictures of Mercedes are already available for sale…

The old Palekh continues to labor, but the fruits of that labor are disappearing abroad. The largest collections of Palekh are in the United States and the Netherlands. The artists are in desperate need of state funding. The older generation is disappearing. The Firebird that Palekh made famous is turning up on refrigerator magnets, while the bird itself has flown away to some faraway kingdom.

The Palekh miniature is a folk art that developed in the village of Palekh, in the Ivanovo region. The style of painting springs from the traditions of the ancient Suzdal and Moscow schools of icon painting (15th-16th centuries).

Beginning in the 1920s, Palekh artists began decorating boxes, brooches, powder cases, spectacles cases and ashtrays. The motifs for these miniatures were typically taken from everyday life, classic works of literature, fairy tales, folk poems and songs. The work is usually done on a black background with decorations in gold.

The article is abridged and first published in Russian in Rossiyskaya Gazeta.