Stalingrad: The city that changed the course of history 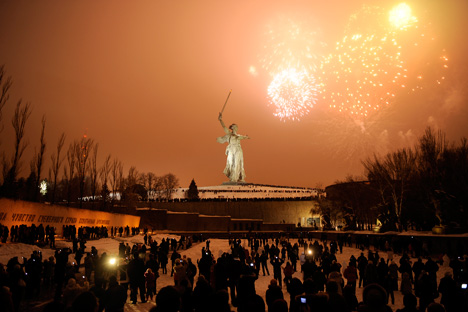 Volgograd (formerly Stalingrad) celebrates the 70th anniversary of the Battle of Stalingrad in early February.

Mikhail Mordasov / Focus Pictures
Volgograd is called “Russia's most Soviet city,” and justifiably so. The city became known to the entire world as Stalingrad during World War II. The entire city had to be rebuilt from the ruins of war, and monuments to the city's defenders became famous.

The 70th anniversary of the Battle of Stalingrad sounds like a leitmotif for the city of Volgograd (formerly Stalingrad). The exhibitions, events and activities dedicated to the anniversary will continue for the rest of the year.

One of Volgograd's emblematic symbols is the Battle of Stalingrad Panorama Museum. As well as the enormous canvas of the battle panorama itself, the museum holds the largest collection of documents and artifacts related to the Battle of Stalingrad. In the Triumphal Hall are hung the original banners and battle-standards from different units and divisions that took part in the battle.

There is also an attractive collection of gifts that were given to the city in token of the resolute bravery of its defenders — sent by people from all over the world. Among these gifts are bronze copies of famous Rodin sculptures (“The Kiss” and “Loyalty”) donated in 1945 by Lady Westmacott. There is also the sword of British monarch King George VI, presented to the citizens of the city in 1943, in recognition of the victory at the Battle of Stalingrad.

The Battle Of Stalingrad (July 17, 1942 – February 2, 1943) was the largest-scale battle of World War II. Along with the Battle of Kursk, it became the turning point in the war, following which the German military lost the strategic initiative. Approximate estimates suggest that close to two million people from both sides lost their lives in the Battle of Stalingrad.

A special museum display entitled “One for All...” was created at the Battle of Stalingrad Panorama Museum in honor of the 70th anniversary of the battle. The display focuses more on human emotion than grandeur and is of great interest for this reason. All of the items in the exhibition are authentic — uniforms, weaponry, trophies, domestic items, documents and letters of the city's defenders, who had various ranks, professions and nationalities.

Alongside the Panorama Museum is Pavlov's House (Sovetskaya ul., bldg. 39). This legendary building became famous due to the fact that, during the battle, it was defended by just a handful of soldiers for 58 days. There were 25 defenders, but only 15 men were at the garrison at any one time. The four-story building was a vantage-point, and both the Russian and German forces sought to hold it.

Yet, in the heat of the intense fighting, a baby was born in the building — Zina. Zinaida Selezniova is of the same age as the Battle of Stalingrad and still lives in Volgograd today. Pavlov's House, too, has been reincorporated into the architectural plan of the city’s Lenin Square. Decorated with relief carvings, the house is once again a normal residential building where ordinary local citizens live.

Volgograd has no 4- or 5-star hotels, nor does it have any international chain hotels. Even so, visitors can find somewhere to stay. The Volgograd Hotel on Alleya Geroev is in a historic building that was restored after the war. The Hotel Intourist, directly opposite, is a newly built hotel. In the courtyard of the Hotel Intourist, in the basement of the Central Department Store, is a museum called Memory — the location where Field Marshal Paulus was captured.

To feel the elation, the bitterness, the pain and the pride embedded in its stones, you need to climb the Mamayev Kurgan (located at 47 ul. im marshalla Chuikova) on foot. It is a most rewarding memorial site to visit; visitors can leaf through it, as they would a book. Each turn is unique — the Poplar Avenue and the Square of the Last Stand, the Ruined Walls and the Lake of Tears, the Pantheon of Glory and the Bereaved Mother.

The culmination of the memorial experience leads to “The Motherland Calls” statue. From the foot of the gigantic sculpture (standing tall at 279 feet) there can be seen a magnificent panoramic view of the city and the Volga River.

Bear in mind that the Mamayev Kurgan is also a burial site, where the bodies of approximately 36,000 Soviet warriors lay buried in the Greater (on the hill right under the Motherland statue) and Lesser Mass Graves. After the city was liberated, bodies found all over the city were brought to these mass graves. Several of them were identified only recently.

English-speaking guides, in adequate supply. The Socio-Pedagogic University held special courses leading up to the 70th anniversary of the Battle of Stalingrad, to provide foreign visitors with guides speaking English, German, French and Spanish. Travel services can be booked on the website portal http://www.turizm-volgograd.ru/, where the Volgograd Regional Agency for Tourism offers assistance with travel agencies, hotels, museums, excursions, holiday camps, and a tourist discount card.

On Feb. 2, at the War Cemetery at the Mamayev Kurgan, a commemorative obelisk bearing the names of 17,000 of Stalingrad’s defenders was unveiled. Their names were confirmed as the result of painstaking work undertaken by many researchers over the decades.

The Mamayev Kurgan is the last resting place of thousands of fallen soldiers, and, in the 21st century, another monument appeared here — a Russian Orthodox Church of All Saints. Everyone who comes here to honor the memory of those who fell in battle can pray in the Orthodox tradition and light a candle for the peace of the souls of the departed.

The abovementioned sites are the main shrines of Volgograd. Yet the whole of the rebuilt city center serves as a memorial to those who died defending the city and those who rebuilt it. It is worth taking a walk through the streets of Volgograd, where even a single tree or lamp post could be a monument.

Actually, there is such a post — a survivor of the Battle of Stalingrad, scarred by bombs and shrapnel, standing on the square in front of the station, alongside the Memorial Museum (located at 10 ul. Gogolya). There is a memorial tree as well — a poplar on the Avenue of Heroes, growing straight out of the asphalt paving, almost warping the level ground.

Regardless of whether the tree is causing a disturbance, no one dares to have it removed: it is the only tree that survived Stalingrad. No other greenery survived the burned and blasted soil.

There is an astonishing variety in the city, and visitors can find European (including Italian, Czech, and German), Japanese, and Caucasian cuisine. Shashlik kebabs are available almost everywhere. The most popular fast-food is Chicken Kiev, leaving Big Macs far behind — although Volgograd has a McDonald's too.

This might be why the citizens of Volgograd are so fond of greenery. The entire river embankment and Avenue of Heroes were made over as a park zone. Lenin Avenue — Volgograd's main thoroughfare — is more of a leafy boulevard than an avenue, with a broad pedestrian stretch down the middle, dividing the two streams of traffic.

In the spring, the city is lined with flowers. First come the apricot blossoms that bloom along the streets and courtyards, known as “Volgograd Sakura.” Next come lilac and acacia blossoms, Catalpa and horse-chestnuts — a wonderful time for a walk along Peace Avenue. This was the first city avenue to be rebuilt after the war, because its name recommended it ahead of others.

The planetarium is at the end of Peace Avenue. As well as astronomy, the avenue is interesting for its architectural value, with a dome topped by a sculpture made by the famous Soviet master, Vera Mukhkina. The observatory also has an unusual place in history: the equipment is fitted with Zeiss optical lenses, a gift from East German workers for Stalin's 70th birthday.