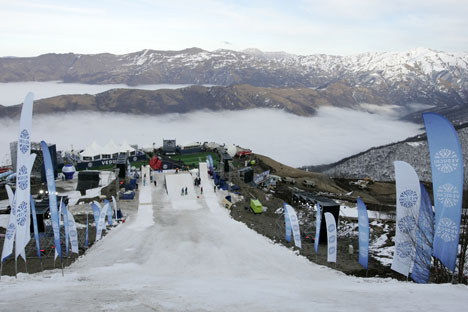 An ambitious project by Chechen billionaire and businessman Ruslan Baysarov, the resort Veduchi is expected to attract a great deal of tourists to the republic. Source: RIA Novosti

Construction of the Veduchi ski resort — the first major project in the mountainous part of Chechnya — has begun. The resort is expected to generate interest in Chechnya as a tourist destination. RBTH correspondents Tatyana Shramchenko and Vladimir Stakheyev visited Veduchi to get an idea of its future prospects.

Seven glass towers break through the mist — this is Grozny City, the business district in the center of Grozny. Alongside the towers stand the government building and a mosque, one of the most beautiful in Russia. Just five or six years ago, battles were raging in the Chechen Republic, the capital was in ruins, and the mountains were in the hands of the militants; but today life is peaceful here.

We are travelling to the village of Veduchi, which is in Itum-Kalinsky District, 50 miles from Grozny. The Veduchi all-season ski resort is being built here. An ambitious project by Chechen billionaire and businessman Ruslan Baysarov, the resort is expected to attract a great deal of tourists to the republic.

The drive from Grozny to Veduchi takes about an hour. It’s a bit early to speak of a road, though: the tarmac stops outside the town and, from then on, it’s a dirt track. Here and there we see road-building equipment along the sides. If Ruslan Baysarov is to be believed, the road from Grozny to Veduchi will be built within a year.

We drive through the Argun ravine. It’s gloomy on the streets, and the mountains are shrouded in haze. Scenes from reports on the fierce battles that took place here in 2000 run through our minds. Now, only the local wildlife disturbs the peace of these places.

“We’ve got bears, and wolves, wild boar, hares,” says our driver. The only creature from this list that we see on the way is a hare: apart from that, all we see is Chechens armed with machine guns; they are guarding the construction site and the entrances to it.

An hour later, we stop outside a big stone house with a sloping roof. The owner of this mountain “chalet,” Ruslan Baysarov, comes over to meet us, wearing a jacket adorned with the logo of the future resort. After allowing journalists to have a look around and warm themselves with tea made from sea-buckthorn berries, the billionaire starts talking about the project and answering questions, clearly deriving pleasure from the process. 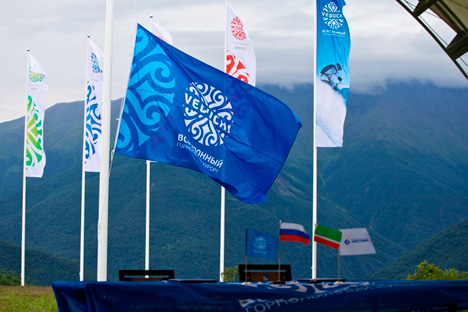 Construction of the Veduchi ski resort — the first major project in the mountainous part of Chechnya — has begun. Source: Vladimir Stakheev

The plan is to build a big hotel complex in Veduchi, along with 20 chalets “in the national architectural style,” 19 ski tracks with varying degrees of difficulty, nine ski lifts and other pleasant tourist facilities — for example, a spa center or a heated open-air pool. As for how long it will take to build, Baysarov says approximately three-and-a-half to four years.

He then confidently declares that the budget is 15 billion rubles ($487.8 million) and that the future resort will be able to handle 4,800 guests at a time.

The Russian company Mostovik is responsible for the construction work. Baysarov talks vaguely about getting foreign companies involved in the project: “I’m having discussions with four companies. There’ll be some kind of Western operator, for sure; we simply need one, in terms of attracting tourists and also of providing the right service.”

The skiing zone will be situated on the northern slopes of the Daneduk ridge. The highest peak is 11,482 feet.

“But the fact that it’s Chechnya, the Caucasus, isn’t getting a negative reaction from them. I’m not seeing anything like that,” says Baysarov, forestalling journalists’ questions about the republic’s negative image — the result of two bloody Chechen wars. According to Baysarov, “the head of the region should ensure its security” — the head being his close friend, Ramzan Kadyrov.

A question by RBTH correspondent about why tourists choosing between Méribel and Veduchi should opt for the latter receives a simple answer from the Chechen billionaire: “It makes no difference to skiers where they ski. I don’t think they’ll ask themselves whether it’s Chechnya or not.” Apparently, the main attraction factor for foreign tourists will be the exotic nature of the place and the local color.

Having satisfied journalists’ curiosity, Baysarov invites everyone to go one mile higher, where the first ski slope is ready. We get into four URAL armoured trucks (heavy vehicles with grilled windows, used by the police for transporting prisoners). The unusual choice of transport is the butt of jokes for the entire two-hour journey.

The column of trucks slowly but surely makes its way up the narrow rocky track; in places, the road is exactly the same width as the vehicle. To negotiate the bends, the drivers have to stop constantly, pull back, and turn the wheel to full-lock. Even as the changes in pressure block your ears, the beauty of the scenery takes your breath away.

On the previous day, young riders from various countries, having agreed to test the ski slope and take part in a presentation of the project, had been driven up here in the same way.

When we reach the top, we silently thank God that we are still alive. We look around, and the same question is on everyone’s lips: “Where’s the snow?” According to the plan, the skiing season in Veduchi should last for six months, from November to April. Now it is March, and the only place we can see any snow is on a small artificial slope for extreme snow sports.

“It’s quite normal, it happens in the mountains,” says Sean Butler, reassuring us. He is a 27-year-old Canadian and one of the riders who have been invited here. “I really like everything here. It’ll be easier when the ski-lift system’s built. Chechnya? What about Chechnya? Most people don’t know anything about it in my country.” 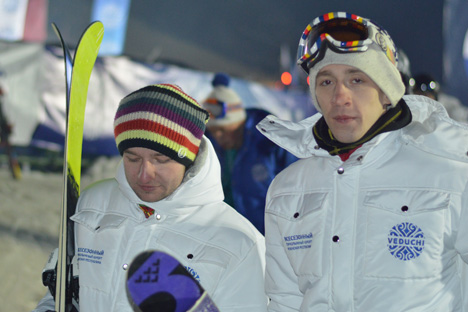 The young devotees of extreme snow sports already like the resort, even though it has not yet been completed. “I’m making a film about Chechnya,” says Russia’s best skateboarder, Maxim Kruglov, who has decided to take up snowboarding as well. “I like everything here. When my mom found out I was going to Chechnya, she was scared stiff: ‘What? Chechnya?!’ But she calmed down when I told her everything’s peaceful there and no one’s shooting anymore.”

Maxim’s mother believed him. Will the tens of thousands of tourists that Ruslan Baysarov is counting on believe him?

On the way back down, we discuss what we have seen. We’ have even more questions than we had before we started the trip. How did they manage to get so much equipment up to the top? Will they manage to build the road in a year? Who’s going to go to Chechnya for the skiing?

For the time being, all we probably know is this: the next stage of this ambitious project will be presented in the summer.