A glimpse of the ancient Rus: 5 most beautiful monasteries of Moscow 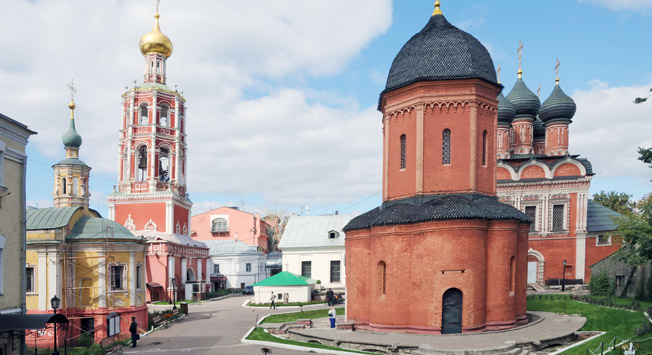 Lori, Legion Media
RBTH has chosen the 5 most beautiful Moscow monasteries with peculiar architecture and history that are open for tourist attendance

Located southwest of central Moscow, Devichye pole (Maidens’ field) is a place where young girls were chosen to be sent as tribute to the Mongols during the Yoke of Rus. After the yoke was thrown off, Ivan the Terrible’s father Vasiliy III founded a monastery here. By the end of the 16th century, over 20 of 120 nuns belonged to royal and noble families, so the monastery was largely supported from the Tsar’s treasury.

The monastery also had defensive functions, so it has amazing baroque walls and towers, which mostly appeared in the late 17th century. Novodevichiy then became a place of confinement for Sophia, Peter the Great’s older sister, who had wanted to usurp the throne. Spending the last 15 years of her life in a cell, Sophia gave the order to renovate the monastery, so it could rival the Kremlin in its magnificence. And just like the Kremlin’s towers, all 12 towers of Novodevichy have unique names.

After the Revolution, the monastery was closed, but preserved almost completely, as in 1934 it became a museum. Since 1994, the monastery has become active again, and in 2004 the architecture ensemble of the monastery was included in the UNESCO World Heritage list. Novodevichiy is also famous for its elite necropolis, where Russian greats are interred –Nikolay Gogol, Fyodor Shalyapin, Vladimir Mayakovsky, Sergey Prokofiev and many others. With its state-of-the-art gravestones and monuments, the graveyard is a kind of museum in itself, worth visiting as much as the old monastery territory.

In the summer of 1591, Moscow was attacked by hordes of Tatars. Tsar Fyodor watched from the Kremlin walls how a small Russian military camp stood out against the surpassing nomads. Fyodor chose to stay in the Kremlin, so that the soldiers would know that if they lost, the Tsar would be captured or killed. And they won. To commemorate this victory, Fyodor ordered a monastery to be founded in the place where the Tatars were defeated.

The miraculously preserved interior can be seen in the monastery’s Great Cathedral, built in the late 17th century, just like the powerful walls and towers. Frequented by the Tsars on their pilgrimages, Donskoy was a very rich and powerful monastery, and to be buried at its necropolis was considered a great honor among the nobility and merchants. Here, the great Russian writer Alexander Solzhenitsyn was buried in 2008.

Greatly revered among Moscow’s believers, the monastery was completely closed only in 1929. After that, it became an architecture museum: when in the 1930s many Moscow buildings and churches were demolished, the most valuable parts of their decorum were transported to Donskoy, so here, for example, you can still see sculptures from the original Christ the Savior cathedral and remnants of other famous Moscow buildings. Since 1991, the monastery has been active once again. Drowned in green, Donskoy monastery and its park is a place for quiet repose and meditation in the heart of the city.

On Petrovka Street, posh boutiques and restaurants surround the Vysoko-Petrovsky monastery that gave the street its name. As the legend goes, Peter of Kiev, the first Russian metropolitan who moved his seat to Moscow, founded it in the 14th century. He was later canonized as Moscow’s patron saint. The monastery’s oldest building is the captivating Saint Peter’s Cathedral – Russia’s first rotunda, built by Italian Renaissance architect Aloisio the New, also the author of the Kremlin’s magnificent Cathedral of the Archangel.

Vysoko-Petrovsky is a great example of “Naryshkin baroque” style – a picturesque, bright and full-colored fusion of Russian architecture and European baroque. Its name comes from Naryshkins, the boyar family of which Peter the Great’s mother, Natalia Naryshkina, was a descendant. Natalia and her relatives are buried in Vysoko-Petrovsky, so the whole monastery was rebuilt in the baroque style in the late 17th century. Closed formally in 1918, the monastery resumed monastic life in 2009.

Andronikov monastery is situated on a high bank of Yauza River, east of central Moscow. Founded in the 14th century, after the revolution it changed many functions: a concentration camp for dissidents, a detention centre for the homeless children and a workers’ dorm. The monastery was almost doomed to demolition, when historians discovered that its Spassky cathedral is the oldest fully intact temple in Moscow. In the 15th century it was decorated by Andrey Rublev, the foremost Russian icon-painter, who was a monk in the monastery.

Many years after his death, Rublev’s name helped preserve the cloister: in 1947, Stalin himself sanctioned the creation of Rublev’s museum, which was opened in the monastery in 1960. Since then, the monastery has been restored, and in 1993, an ancient crypt was discovered under the main cathedral, supposedly containing the remnants of Rublev and Daniil Chernyi, another legendary icon painter of ancient Rus. Currently, Spassky cathedral is an active church, but the monastery life hasn’t resumed.

Andrey Rublev’s most famous icon, “Trinity”, now on display in the Tretyakov gallery, was created in the 15th century for the central cathedral of the Trinity Lavra of St. Sergius, Russia’s foremost monastery. It was founded in the 14th century by Sergius of Radonezh, Russia’s most venerated saint, in the woods, 70 km north of contemporary Moscow.

Sergius started the monastery with just a wooden church and a few monks who provided for themselves – Sergius forbid them to collect alms. Sergius’ devotion and obedience became renowned among princes of Rus, and his monastery became the spiritual center of the Orthodox Church. The monastery’s history is interwoven with some important events in Russia’s history. Here, Sergius blessed Prince Dmitry Donskoy before his great victory over the Tatars in the Battle of Kulikovo in 1380, which threw off the Mongol Yoke. In the Trinity cathedral, Ivan the Terrible was christened in 1530. In the early 17th century, the monastery withstood a 16-month siege during the Polish invasion. Sheltered in this monastery in 1689, a young Peter the Great decided to take the throne from his elder sister Sophia. And these are just a few points in the cloister’s famous past. The monastery was (and still is) Russia’s foremost pilgrimage point and tourist attraction.

By modern times, Sergius’s ban on alms resulted in Trinity Lavra becoming the richest monastery in Russia – it owned thousands of villages and conducted overseas trading. Around it, a whole town was formed, called Sergiev Posad. In 1920, Lavra was closed and turned into museum, but just for a short while – in 1946, monastery life started again, along with restoration of the churches and cathedrals. Now, Trinity Lavra is vey well preserved and offers a unique chance to see the living history of Russia’s church with your own eyes. Trinity Lavra is included in the UNESCO World Heritage list.