Nilmoguba: almost a Christmas Story on the shores of the White Sea 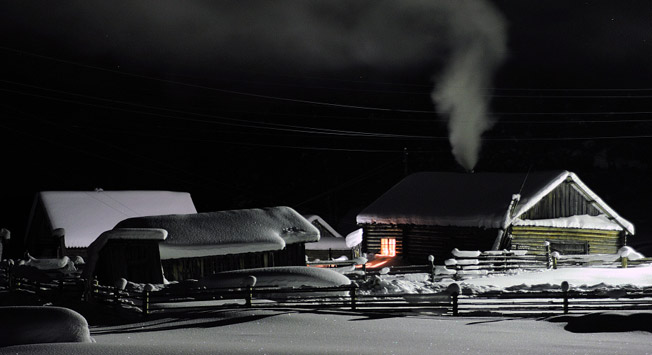 Ivan Dementievsky
Snow buries Nilmoguba’s wooden houses in the winter, and sedge and tall weeds grow in the summer. New life is infused into such villages now, when city dwellers, looking for short getaways to nature, rent houses here or even book full tours.

On the shores of the White Sea, three or four kilometers from the Arctic Circle, there lies a village. In the Soviet era, it contained sovkhozy (the state version of kolkhozy, or collective farms), and the locals raised deer, killed game and worked in the fishing industry. Then perestroika and capitalism arrived, the sovkhozy disappeared and the older generation was left with nothing to do but remember their youth and large herds of deer. In the 1990s, when times were particularly hard, people started leaving the village for Murmansk. They cut off the power to Nilmoguba, dooming it to oblivion. However, 10 years later, local businessmen decided to devote their attention to the village, and they built diving centers and a center for studying beluga whales in their natural habitat. The small population that had stayed in the village gained job opportunities and a new way of life: some work at the diving center, serving tourists and operating equipment, while others work with the animals.

Only the hardiest residents opt to spend the winter here, living as people did in the past; instead, summer sees the arrival of many tourists and summer-home owners, who are returning to their family gardens. With time the village has started to expand anew—residents of Murmansk and Moscow are buying plots of land here, and people are coming to these quiet locales for the tranquility, incomparable northern landscape and midnight sun, which lasts for six months.

Sometime in mid-February, the first rays of sunlight break through from behind the horizon, the polar night draws to a close, and life reawakens from its slumber. The first tourists start coming—ice diving season is starting. For the local peasants, it is the season of ice fishing. Closer to spring, the fishing becomes more alluring, and as the ice melts, those who have motorboats head to the White Sea.

This is how people live in this village and in hundreds of others in the Arctic Circle that may not have been quite as lucky: from winter to winter, and it feels as though nothing changes here. If you make a second visit a year or two after your first, you will see the same houses, in places having fallen into disrepair, have now been patched up; the same people, who have aged slightly; and the same gray White Sea, which does not change at any time of the year. The most important thing is to not disrupt the locals’ lifestyle, the particular routine, which has not changed for more than a decade. Then they might treat you to some cloudberry jam.

Snow buries Nilmoguba’s wooden houses in the winter, and sedge and tall weeds grow in the summer. New life is infused into such villages now, when city dwellers, looking for short getaways to nature, rent houses here or even book full tours. Visitors can fish; Vladimir Putin, Jane Fonda and small groups of Arab sheikhs have come here to do this—or dive, pick mushrooms, sweat in the bathhouse or just relax.