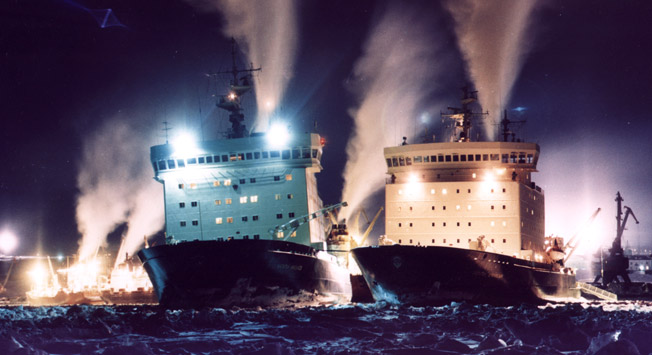 Anna Gruzdeva, Center of Folk Arts Archives
It is not true that one cannot travel around Siberia in the winter. The Taimyr Peninsula, whose shores touch the Kara Sea and the Khatanga Gulf of the Laptev Sea, is a unique territory that it is interesting to “experience by hide,” whether its -30°C in November or +30°C in July.

The light of the tundra

The Taimyr Peninsula is the northernmost region of the Eurasian continent. The route to Dudinka from Alykel Airport traverses a silent and desiccated tundra that looks like the depths emerging from the bottom of the ocean. Along the snow-covered asphalt, endless power lines stretch and occasional larches appear, while the Arctic midday sun barely begins to straddle the sky and the snow, which retreats into the pale blue expanse.

Those who are accustomed to the -30°C temperatures on the Taimyr Peninsula stand outside. But aside from the atmospheric pressure and the wind direction, beyond the Arctic Circle it is commonplace to take into account the “severity of the weather”—the combination of the robust ice and the northern wind. It is usually another 10 degrees colder.

The birth of Dudinka is linked with the settlement and colonization of this northern part of Siberia. In the mid-17th century, the first Russian Arctic town, Mangazeya, was the center of Taimyr and the lands leading to it. From here, accompanied by troops of streltsy, tribute gatherers (of yasak, or tribute paid off in furs) went to the winter quarters from the recently allied northern tribes. Hence in 1667 there appeared the “Dudino yasak winter quarters,” which were assigned to the streltsy by the 50-year-old Ivan Sorokin. In the 18th and 19th centuries, his winter quarters became a transfer base and point of departure to the so-called Khatanga highway, or “Russian road,” along which Russian goods were carried to the tundra.

Many Arctic expeditions also started their explorations in Dudinka, which lies on the right bank of the Yenisei. In the 18th century, participants in the Great Northern Expedition stayed in the winter quarters: Khariton Laptev, Semyon Chelyuskin and Fyodor Minin. In 1843, Alexander Middendorf, who was the first to cross the Taimyr and who wrote an ethnographic description of the peninsula’s population and nature, arrived here. Until the early 20th century, Dudinka stayed somewhat like a winter quarters or small northern village “with 50 wooden houses.” Even today, now that it has become a large (by the standards of the Siberian North), industrial city-port, it can be visited in a couple of hours—or in an hour in “severe weather.”

“The town where hearts moor”

“I love you, Sveta!” It is a declaration by green paint, to a five-story building that is nearly hidden behind a snowbank; evidently, it is a summer love. Thoughtfully from a meter higher, to some red: “Be careful of the icicles!”

The historic wooden development of the past centuries has not endured in the town: permafrost has chilled the warm huts. After becoming a town in 1951, Dudinka did not take on its current appearance until the 1960s, when the first four-story buildings on stilts started springing up on the frozen earth; in the 1970s–1990s, microdistricts of nine-story buildings started being built. Due to the abnormally cold winters (next week’s forecast includes -55°C and “severity”), utility lines, as in many northern cities, were built aboveground in Dudinka; they are huge silvery snakes that stretch through the town, competing in height with the snowbanks.

In these regions, the Arctic day and night give rise to unusual light transformations, and people complain of an “Arctic” stress syndrome that is manifested in sleepiness, fatigue and melancholy. In the 1990s, as part of an antidepression program, people painted the unattractive residential boxes in bright colors: blue, pink, green and yellow. Over time, the multicolored paint has faded in the bright July sun.

The town’s cultural center is easy to find: it is at the intersection of Matrosov and Ostrovsky Streets, where the Arktika modern amusement complex with a movie theater, pool hall, café and other pleasures of civilization shine. But the heart of the “town where hearts moor,” as Dudinka’s official site puts it, is Sovetskaya Street, which extends along the Yenisei: it has an urban embankment, and cargo and passenger piers. The first of them was built in 1936 in connection with the development of the Northern Sea Route and the construction of the Norilsk copper and nickel plant. Now, Dudinka is the northernmost international seaport in Russia. All year round in this port, sea vessels and barges bearing the traditional red-orange Arctic colors are unloaded from Arkhangelsk and Murmansk, and in the summer an inland waterway connects the port to Krasnoyarsk and Dikson.

In the early 20th century, the Norwegian traveler Fridtjof Nansen called Dudinka the “northern Moscow—the most important point in the whole region.” He turned out to be correct. The urban embankment makes an impression with the massiveness of the vessels and the huge port derricks, which look like iron cranes. In the spring, these cranes, and the loading devices and other parts of port infrastructure, “evacuate” from the berth to the neighboring high point, Zhuravlinaya Hill, as Dudinka’s seaport is the only one in the world to flood annually during the thaw period.

A stern Lenin wearing a shapeless fur coat watches over the cold Yenisei from the embankment. Here are the town Culture House, the small Holy Elders church, and the sprawling, flag-flanked municipal administration building. Sovetskaya Street is a good place to start getting acquainted not only with the port’s history, but also the old, ethnic history of the peninsula and the town, a history that is the greatest treasure for the traveller.

After shedding her fur vest, Aksinya Ivanovna carries to the table frozen cloudberries and whortleberries generously sprinkled with sugar, and takes out mugs emblazoned with a white bear. In her Mukustur workshop, visitors’ eyes pop out at the sight of the quantity of ethnic souvenirs: figures carved out of mammoth tusk are precisely arranged on shelves, jewellery made out of beads and leather is displayed, wolf and wolverine skins are laid out, and on the floor stand genuine reindeer high fur boots and fur house slippers.

Akisnya Ivanovna is a Dolgan. She comes from one of the indigenous small-numbered peoples that appeared on Taimyr before Russian vessels started docking on the banks of the Yenisei. The Dolgan, Nenets, Enets, Nganasan and Evenks arrived on the peninsula before the economic exploitation of the natural riches and the northern Siberia river routes, in a period when the lack of paved roads and the harsh climate made it possible to lead only a nomadic life in such lands.

These unique ethnic groups continue to live in the northern Krasnoyarsk Region. However, there are not many of them: the Nenets, who call themselves nenei nenets, or “genuine person,” number only 3,500 in the Taimyr Dolgan-Nenets municipal district. The Dolgan, who resulted from a mixture between Tungu, Yakut and Russian blood, are slightly more numerous—5,500. There are few Nganasan, the oldest of the handful of Taimyr peoples: there are just 800 of them in the cold polar region. There are fewer than 300 Evenk in this enormous territory, and there are around 200 Enets in total. The traditional lifestyle and reindeer breeding of the northern peoples are preserved on the Taimyr and in the villages of Volochanka, Nosok, Tukhard, Potapovo and a few others.

Back in the town center, it is worth stopping at 21 Matrosov Street, a building with a tent-shaped entrance that contains the House of Folk Art. There is an art gallery of the famous Taimyr artist Boris Molchanov, who created works out of leather and suede, and a large souvenir shop, which sells inexpensive trinkets made out of reindeer as well as more expensive figures carved out of mammoth tusk.

In the Mukustur shop at 2 40 Years of Victory Street, there is also a large selection of souvenirs, but they are more expensive because this is a veritable workshop, where fur boots and shorter fur boots known as bakery made from reindeer, traditional parkas and jewelry are made. The proprietors will hardly refuse a request to watch the clever process of making shoes or clothing. “We sew all of this mainly for our own people,” says Aksinya, the owner of Murkustur.

“For our own” is a characteristic trait of the local ethnic culture, which can in no way be exported because of the distance from the mainland, the lack of paved roads through the tundra, the expensive plane tickets and the genuinely harsh climate.

After the collapse of the Soviet Union, in Dudinka, as in other northern towns and villages, the cultural values and customs of the Dolgan, Nenets, Evenk, Nganasan and Enets started to experience a rebirth. National self-awareness strengthened, and the ethnic symbols of the indigenous small-numbered peoples started seeping into the daily life and cultural environment of Dudinka, bolstering its tourist charm. But the underlying processes occurring in the life and outlook of the disappearing northern peoples are complex and connected (as is the case all over the world) to the influence of civilization on the nomads’ traditional lifestyle. So before the distinctive and ancient culture of the “indigenous people” loses its symbolic intensity, craftsmen and language, it is worth saving money for a ticket to Dudinka.

Originally published by siburbia.ru (in russian)