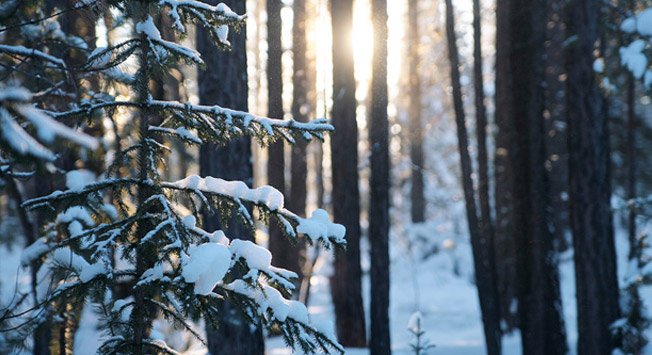 Anna Gruzdeva
The wild and poetic culture of the Evenk reindeer herders had developed even before the Tunguska event. This region is not one of Russia’s most developed tourist sites so in the small village on the banks of the Podkamennaya Tunguska it is not the true Siberian people (the Evenk) who are seen as a curiosity - but rare passing tourists.

Through a dirty porthole in the darkness a rattly aircraft makes its descent: Varnavara is below us. The thick newspaper ‘Evenskaya Zhizn’ blackens the fingers with print and states that due to abnormally warm weather instead of the usual -30ºC in November it is just -1ºC. The aircraft touches down.

You arrive in Vanavara as soon as you step off the aircraft - with crisp snow underfoot and the pointed tops of the Taiga forest on the left while on the right are sparse lights and dark figures. The baggage is unloaded at the terminal building in a pile straight onto the snow.

The village is quiet and smells of wood from the huge woodpiles. You won’t find a normal tourist map in Vanavara, but you can read the history of the city by the street names: This is where Meteoritnaya Ulitsa and Ulitsa Uvachana – the famous historian of the north and Ulitsa Kulika – the first to research the Tungusska phenomenon converge.

The Taiga here has always been rich in furs and fish therefore, so the story goes the name Vanavara is a combination of two Evenk words ‘vane’ (to mine) and ‘vare’ (to kill). There is also another story that says that the Evenk word ‘anadaman’ is at the heart of the name. This means ‘to share with your friends that which is most valuable to you’.

Today around 400 Evenk people live in the Tungus-Chunsko region of which Vanavara is the centre and most of the population are Russians. Russian men in this region are habitual hunters and fishermen – the principle occupations of the Evenk.

‘The Evenk taught Russian hunters to walk in high fur boots, craft shrouds for their guns and to use snow shoes to walk in the snow’ explains Rimma Pirogova - Branch Head at the local Natural History Museum ‘The boot (a hide made from seal and elks feet), was pasted onto the lower part of the ski, so it would not slide when climbing a slope..’

Nelli Yakimovna Yolkina from the Kurkogir Evenk tribe is a representative of the largest tribal society in the Tungus-Chunsko region. Nelli Yakimovna’s mother is the oldest Evenk in Vanavara - one of the elders who lived a nomadic life in the Taiga and bred reindeer.

‘When I was 8 years old I loved to ride on the dog-sled with Mama. We would go to the thick of the Taiga and tip over!’ explains Nelli. ‘The moon would be shining above us and Mama would climb down from the sledge, put on her mittens with holes to fix the girth and we would rush off again through the Taiga. We would arrive back at the tent and a lamp would be burning and the ‘iron’ stove would be warming as the hides were hung out. Mama would thaw out the reindeer milk, and the calves would come running…a lovely childhood.’

The Evenk are becoming fewer and fewer, while their culture lives on for the most part in agricultural shows, decorative folk art and in the small Evenk branch of the Natural History Museum. Here you can try on ponyaga, put on esaptury – special snow goggles made of birch bark that protect the eyes of the Evenk from the blinding whiteness.

The Tungusska Reserve is located in the southern part of Evenkiya, between the Kamennaya Tunguska and Chunya Rivers, and covers an area of about 3,000 sq. km. – its history is inseparably linked with the old “Tungusska phenomenon”.

In 1908, a fireball flew over a huge area of Eastern Siberia. It flew almost 770 miles within a few minutes, and then exploded over the deserted taiga at the height of about 5–10 meters. Residents of Vanavara and Evenk nomads, who were on the taiga, witnessed this cosmic catastrophe. The blast wave felled the forest and killed animals within a radius of 30–40 kilometers. The taiga, where 80 million trees remained knocked down for a long time, was visited by dozens of scientific expeditions from all over the world throughout the Soviet era.

“There are countless versions of this event...,” says Lyudmila Logunova, Director of the Tunguska Reserve. “However, so far none of them can sufficiently explain what really happened. There is not enough data to describe the whole complex of phenomena that occurred one century ago. The first researches began only in 1927, almost twenty years after the explosion...”

The first person, who dared to come to the place of the disaster, was Leonid Kulik, a member of the Leningrad Committee on Meteorites. In 1927, the scientist with his team went on sleds on the snow that had not melted yet, to the upper reaches of the Chamba, and then they rafted up the Hushmo River. They pulled the rafts by ropes, using their horses as draught animals. They went through the taiga without any trails. Kulik’s striking passion to investigate the disaster provided entire generations of researchers with scientific data for many years.

The branch of the Evenk Regional Museum offers tours on a variety of topics: life and culture of the Evenk, history of Evenkiya, the Tungusska Meteorite, and peasant life. You will have to pay 20 rubles or $0.70) for an admission ticket, and 15 rubles ($0.50) for a one-hour tour.

Vanavara is worth visiting, of course, for the sake of the Tunguska Reserve. A number of summer environmental routes are described in detail on its website: hiking, water tours, tours with landing from a helicopter. In contrast to the village, the tourist infrastructure is well developed in the reserve: cordons are suitable for living in, cooking and forest recreation. Prices for a two-week stay in the forest with inspectors are quite high, but when you consider that it is a group tour, it becomes perfectly acceptable.

The Evenk word for snow is iman. These people call the first fluffy snow livge, and the first wet snow – lune; snow pellets are called butadyari, and fine snow in autumn is called bagurin. The Evenk will say “chingirderi” about fluffy snow with big flakes, and when he sees the very first snow, he will say “livgederen”.

An abridged version of the material is published. The original version can be found here: http://siburbia.ru/geo/sibir-i-tochka-vanavara/