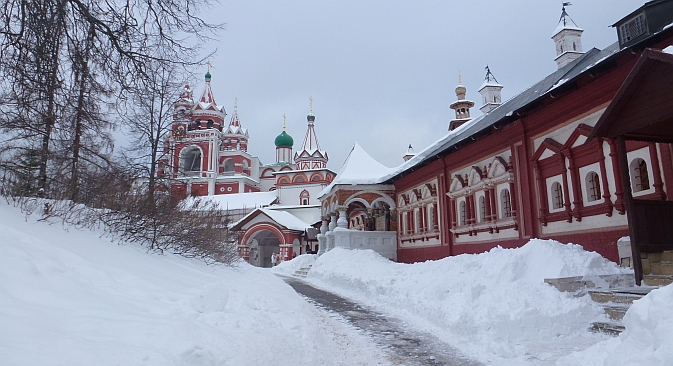 The city of Zvenigorod is a place where you can go if you are fed up with Moscow. RBTH invites you to visit Russia's province just close to the capital.

Muscovites frequently assert that “Moscow isn’t Russia.” In a way, this is true: Russia’s capital is distinctly different from the rest of Russia’s cities. Still, within just an hour’s ride away by suburban rail is Zvenigorod – a town that is genuinely typical of “real Russia.”

Compact, with long main streets and heaps of churches and ancient monasteries, Zvenigorod is a favorite weekend destination for Muscovites wanting to get their heads together amid some fresh air. Here is our suggestion for a great way to spend a weekend in Zvenigorod.

How to get to Zvenigorod from Moscow

The “elektrichka” suburban train runs from Belorussky Station to Zvenigorod Station (see the timetable). Tickets cost 99 rubles (around $3.20), and trains depart every 90 minutes. On arrival, you may need to sprint for the local buses, because they do not wait for people and will leave immediately. Bus no. 23 goes to the monastery and surrounding area. Bus no. 25 goes to the city-center, after which it heads for the Golitsino Estate.

The main street in Zvenigorod is called Moskovskaya, where you’ll find the Hotel Zvenigorod at building no. 29 – with rooms priced at $73 for a single or $93 for a twin. A few doors further down the street is the Zvenigorod Restaurant, which offers breakfast, lunch or supper. In fact, a lot of things are named “Zvenigorod” in Zvenigorod, including souvenir kiosks, cafes, hotels, and even children.

Zvenigorod’s principle attraction is the Savino-Storozhevsky Monastery, located on the banks of the Moskva River. This all-male monastery, with its massive, several-feet-thick stone walls, was founded by Savva (a pupil of the legendary Russian saint, St. Sergey of Radonezh) in 1398.

By comparison with other ancient Russian holy shrines – for example, the St. Sergius Trinity Lavra Monastery in Sergiev Posad, or the Kirillo-Belozersky monastery in Vologda Region – the Zvenigorod monastery is relatively small. A number of cathedrals, a dormitory wing with monastic cells and white walls alternate with other bright red and yellow buildings.

A weekend in Moscow

A weekend in Sochi

A cliché-free weekend in St. Petersburg

The monastery does not impose a strict, religious dress-code on visitors – it is enough for women to wear a long skirt and headscarf, while men should go bare-headed. The monastery actively welcomes visitors – “the main thing is that people come, and admire the monastery.” They offer affordably-priced, monastery-baked bread and baked goods ($2 for a loaf).

After you’ve taken a stroll around the monastery’s grounds and lit a candle in its churches, you can have lunch at the monastic refectory of the Savino-Storozhevsky Monastery – that is, if you aren’t already bored with the Zvenigorod Restaurant. Typically, $6-7 will buy a hearty full meal, including borsch or some other soup, and a choice of different main courses. The kiosk beside the restaurant sells mead – the traditional Russian drink brewed from honey.

You can continue your cultural immersion by going to the Old Town’s Cathedral of the Assumption – one of the most striking of the ancient cathedrals in the Moscow hinterlands. Built in the early 14th century, its early-Muscovian architecture and religious iconography (completed by legendary medieval artists and iconographers Andrei Rublev and Daniil Chorny) have made this cathedral one of the Russian Church’s most famous shrines, as well as a cultural monument. It is, incidentally, one of Russia’s very few, perfectly-preserved, white-stone churches from the medieval period.

An alternative to staying overnight in the main part of town at the Zvenigorod Hotel would be to press on and stay in a rural spot surrounded by pines and firs – the kind of location you could enjoy in both the winter and the summer. There is a downhill skiing slope, with ski equipment for rental, as well as tubes for tubing. The “Zvenigorodskiy” tour center is attractive in the summer too, with its own private beach on the Moskva River. A twin room goes for $126 per day.

A weekend in Suzdal

A weekend in Petrozavodsk and Kizhi

After seeing off the last of the Russian winter (which can sometimes seem never-ending), it is great fun to enjoy a picnic in the open air. Here you’ll find the right set-up, complete with a barbecue “mangal” and wooden picnic tables. The best way to grill is to buy “shashlik” kebabs ready-made in grocery shops in Zvenigorod, of which there are several along the main street.

You can break up the journey home – whether you are taking the bus or the suburban train – and drop in on the picturesque location where the poet Alexander Pushkin spent some of his youth. The Golitysn family’s mansion is located at Vyazyomy, and there are some intriguing stories connected with it. In 1812, the Russian General who defeated Napoleon – Mikhail Kutuzov – spent the night here. By a curious coincidence, Napoleon Bonaparte also stayed here just a few nights later! During Pushkin’s youth, Countess Natalya Golitsyna lived here. Later, Pushkin would write her into his works as the prototype of the old Countess in “The Queen of Spades” (link to English translation).

At the neighboring estate of Zakharovo, the young Pushkin lived with his grandmother, Maria Gannibal. This is the very spot of Lukomorye, which is mentioned in Pushkin’s poem “Ruslan and Ludmila” (link). In fact, this is a bend in the pond, where a great oak formerly stood. This place grabbed the imagination of the young poet.