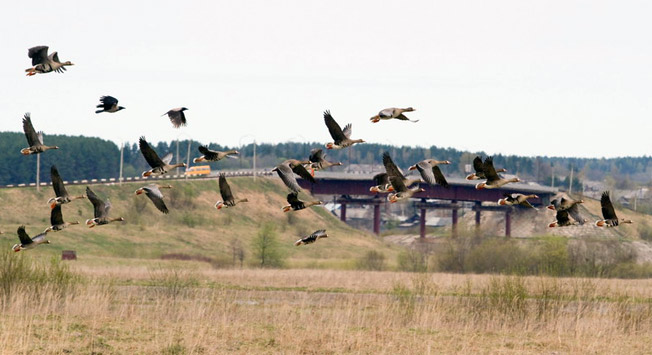 WWII veterans in Kologriv, Kostroma Region, suggest celebrating Victory Day without fireworks, so as not to bother the geese in the local forest reserve.

Kologriv held its first Goose Day in May 2005, and since then the green day has become a traditional holiday. This year, Goose Day will be celebrated on May 11 on the bank of the river Unzha.

During the early spring days, goose wings cover half the sky over Kologriv. The city sits in a traditional goose migratory flight path from Europe to the Arctic. The gaggle rests in the meadows of the Unzha flood plain before flying to the tundra to breed.

Wild geese begin their voyage in the Netherlands, Germany and Southern Europe, where they spend the winter.

The geese choose to take a detour to get to Kologriv. It would be faster for them to fly in a straight line along the Baltic Sea to the White Sea to reach the cold Arctic. But they deliberately change the route to make a stop in the Kostroma Region town.

The birds choose this flyway so that they can have a rest in a calm and scarcely populated location that has few industrial facilities. They rest for about a month, gathering strength for their flight to the Arctic.

“The ‘goose story’ started on the Unzha in the middle of the 1980s. Prior to that, geese flew over Kologriv, but never stayed near the town. However, since 1986, they have chosen this place to rest almost every year, which ornithologists claim is due to changes in their regular flyways. It seems the Unzha has become attractive, as it has no densely populated settlements or industrial sites. Some rare species also come here, including those in the Red Book of Endangered Species . Scientists ring birds in the reserve every year,” said Alexei Terentyev, deputy research director at the Kologriv Forest reserve.

The goose story is one of the reasons the reserve was founded. The Kologriv Flood Plain goose reserve is located next to the town. Nowhere else in Russia do wild geese rest so close to people.

This unique phenomenon has been gathering increasing crowds for about two decades now. Large flocks of wild geese cover flood plains as soon as ice breaks on the river Unzha (and sometimes earlier), when the river breaks its banks and floods the plain. For locals, if the geese are here, spring has come for good.

Specialists estimate the number of birds using the location to rest at between 30,000 and 50,000. New flocks replace the ones that continue their flight. Geese are normally in Kologriv from late April to the end of May.

Ornithologists never miss the opportunity to ring wild geese in transit. Birds are caught and banded by specialists at the Bird Ringing center of the Russian Academy of Sciences’ Institute of Ecology and Evolution.

They have ringed 109 birds over the last three years and were happy to find that many of the birds came back to Kologriv the following year.

There are many tourist attractions near Kologriv besides the goose reserve. Kologriv Forest, a 60,000-hectare reserve, is close to the town.

Its main attraction is the pristine spruce forest; many trees are 50 metres high and up to 400 years old.

There are hundreds of rare animal and plant species in the reserve, including those from the Red Book, Russia's official list of species. Kologriv Forest is a unique primary forest that cannot be found anywhere in Europe.