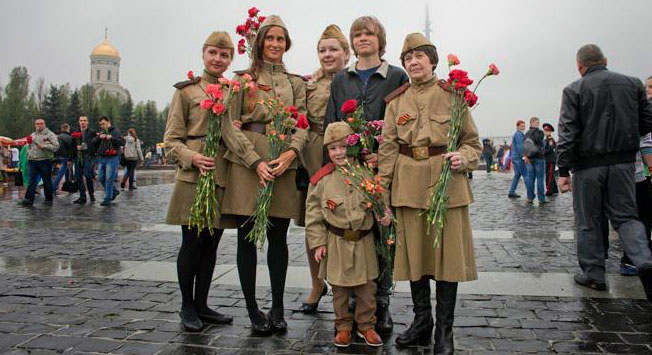 Unlike many European countries, Russia celebrates the end of the war against Nazi Germany on May 9, not May 8. RBTH wishes you a happy Victory Day, and at the same time offers you a sampling of the best events taking place in the Russian capital.

Sample the fare at a field kitchen

The “Moscow Remembers” commemorative procession will start at 12 noon on Tverskoy Boulevard. Descendants of those who won the war will march along the boulevard, carrying photographs of their relatives who fought in the Great Patriotic War and also family relics – medals, decorations and letters from the front. The procession will be accompanied by a military band.

A traditional meeting of war veterans will also take place outside the Bolshoi Theatre from 2 p.m. to 6 p.m. on May 9. “War correspondents” will be at work on tablet computers in the square and will relay information about those taking part to the presenters on the Bolshoi stage, and they in turn will tell their stories to the audience.

Young actors (from the Theatre of Nations, the Classy Jazz group, and other ensembles) will put on a Victory Day show at 2 p.m. in the square outside the TsUM department store, and a field kitchen will be operating nearby.

Scenes from life at the front between battles will be brought to life on Kamergersky Lane. Spectators will be able to join creative arts students re-enacting scenes entitled “Troops writing letters home” and “Resting after combat.”

As always, on Victory Day, May 9, war veterans, their families and tourists who hope to congratulate the heroes will meet in Gorky Park. Be prepared for crowds!

On this day the “Place of Remembrance” memorial will be installed on Lenin Square. It is made from hundreds of small glass tubes filled with a special dye. Each visitor will be encouraged to place a white carnation in a tube to commemorate a war hero.

When the flowers come into contact with the dye they will turn red almost immediately. In this way, within just a few hours the memorial will be filled with crimson carnations – a symbol of victory.

Tamara Gverdtsiteli, along with artists from the Chekhov Moscow Art Theatre, will perform songs popular in wartime on the Musical Stage from 10 a.m. to 3 p.m.

An exhibition of military equipment will open on the Pushkin Embankment: Any visitors who would like to be photographed in Great Patriotic War military uniform can do so between 10 a.m. and 5 p.m. in the Rosenergoatom pavilion.

Learn how to put on foot wraps

On May 9, visitors to the Tsaritsyno open-air museum can listen to military songs and take part in a master class on how to put on soldiers’ foot wraps. The foot wrap is a piece of cloth that was used in the past instead of a sock: soldiers wrapped them around their feet before putting their boots on.

At 12 p.m. there will be performances by several brass bands, a Cossack song ensemble and the Pyatnitsky Russian Folk Choir on a stage not far from the Visitors’ Centre (accessed via Tsaritsyno metro station). Free themed tours will begin at 11 a.m. and last until 5 p.m.

Admission to tours and museum educational programs are allowed only by advance booking: tel. 8 (499) 725-72-28

The best bell-ringers in Moscow will climb the bell tower at the church of St. George the Victorious at 12 p.m. on May 9 as part of the Bell-Ringing Week of the 12 th Moscow Easter Festival, led by Valery Gergiyev.

The great Easter peal in Kolomensky will combine two traditions, the Easter and requiem traditions; according to Moscow tradition, the bells of all the churches in the capital should ring at 12 p.m. on Victory Day.

Dance at the Victory Ball

The Victory Ball in the Hermitage Garden will open at 6 p.m., recreating the celebratory atmosphere of 1945. The program includes a field kitchen, a brass band, military medals and soldiers’ tunics, people dressed in 1940s fashions, and students wearing the military uniform of those days handing out flowers to war veterans and visitors to the Garden.

At the main venue, visitors can learn to dance the Krakowiak, the Rio Rita, the tango and the waltz. Experienced choreographers will be giving master classes for novices.