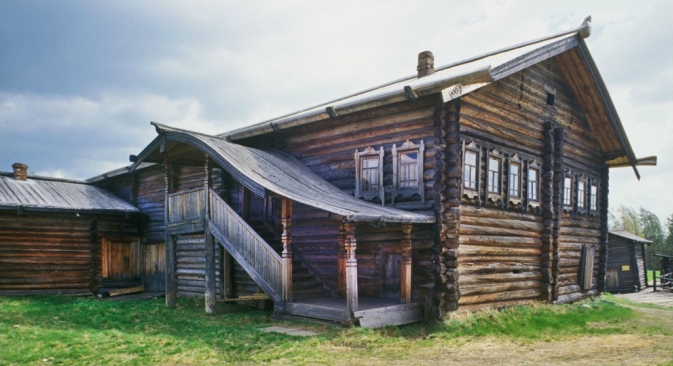 With the advent of the summer months, visitors will again descend on Russia’s popular outdoor museums of wooden architecture. Their appeal combines the beauty of traditional design with frequent festivals and displays of traditional handicrafts.

To get to Malye Korely take one of regular trains from Moscow or St. Petersburg following to Arkhangelsk and then take the bus 104t from Arkhangelsk railway station.

One of the largest such museums is Malye Korely, located on high bluffs overlooking the Northern Dvina River some 15 miles south of Arkhangelsk. The southern boundary of the museum is the small Korelka River, which flows into the Dvina and gives the park its name.

Opened to the public in the summer of 1973, Malye Korely is far removed from the more accessible Golden Ring destinations such as Suzdal and Novgorod. Nonetheless, cruise ships popular with foreigners dock at Arkhangelsk in the summer, and many Russian tourists also visit the museum.

Malye Korely is currently divided into four sectors spread over some 140 hectares of rolling forested landscape and there are plans to add two additional sectors. These sectors represent distinct historic parts of the vast Arkhangelsk Province. On display are wooden churches and chapels, as well as log houses and barns—and even a collection of windmills.

In fact, a windmill is visible from the entrance gates leading to the first sector, which is devoted to the western regions around the ancient town of Kargopol and the Onega River.

Each offers hospitality to visitors and provides a view of interior space in these strong northern dwellings. And each has an attached barn in the back that protected livestock and supplies from the long winters.

One of the most striking displays in the first sector is the Church of the Ascension (with a separate bell tower) erected in the village of Kushereka in 1669. Its five cupolas rise from a massive flared roof with wooden shingles.

Equally impressive is a late 16th-century log bell tower from the village of Kuliga-Drakovanovo, originally located near the southern reaches of the Dvina River.

A wooden pathway leads down a steep wooded ravine to the second sector, devoted to structures from villages along the Northern Dvina River. On display are a number of large houses of exceptional beauty.

The dominant feature, however, is the Church of Saint George from the hamlet of Vershina, near Upper Toima on the right bank of the southern part of the Dvina. The church has a soaring tower roof typical of the Russian north. The interior has a partially preserved icon screen with rich baroque carving.

Adjoining the Dvina sector to the south are the smaller Pinega and Mezen sectors, named after the Pinega and Mezen rivers in the northeastern part of Arkhangelsk Province. Both of these sectors are remarkably picturesque in their setting on bluffs overlooking the Korelka River.

The Pinega and Mezen sectors have a varied array of houses, including some that belonged to Old Believers, religious dissenters from the Orthodox Church who were numerous in this part of the Russian north.

The Pinega sector also contains the lovely Chapel of the Holy Trinity, built in the early 18th century in the village of Valtyevo. Its miniature grouping of entrance, vestibule, and main space are elevated high above the winter snow level.

The planks of the steeply pitched roof have carved ends that cast a shadow design on the log walls. The chapel is capped with wooden cupola and cross.

From this small jewel of a chapel at the southeastern corner of the park, one can return through the park territory with its log houses and windmills, cross another wooden pathway down the ravine and wander back to the park entrance.

There are a number of places to rest along the way. The unforgettable array of traditional design at Malye Korely can easily fill hours at a relaxed pace.