Arkhangelsk: Science's gateway to the North 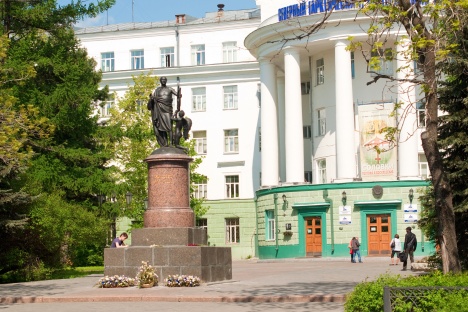 Arkhangelsk is a peaceful city of 350,000, surrounded by vast forests. Despite being nearly 1,000 miles from Moscow, it is often in the news.

The city is the starting point for exploring the Russian polar regions, and today it is experiencing a new dynamism.

Arkhangelsk is the region where Mikhail Lomonosov, the founder of Moscow State University, was born and today the city is trying to find new inspiration in his image as a polymathic innovator.

The Northern (Arctic) Federal University, or NArFU, was restructured in 2010 out of the foundations of the Arkhangelsk State Technical University (ASTU) as part of a Kremlin-led reform of the higher education system.

In a drive to modernize the economy, eight Russian universities received substantial aid during Dmitri Medvedev’s last term of office. NArFU is one of them.

The university received more than 700 million rubles (about $22.3 million) in investments in 2010 alone to protect Russia’s Arctic interest sand create an innovative campus.

The investment is clear simply walking the university corridors. Each floor is adorned with panels retracing the history of Russian Arctic exploration and the lives of the great explorers, including Georgy Sedov, Vladimir Voronin and Ivan Papanin.

“The key aim of NArFU is to protect Russia’s geopolitical interests in the Arctic,” said NArFU rector Elena Kudryashova.

Climate change and the increasingly far-flung hunt for mineral resources is changing the Arctic and Russia is intent on increasing its influence in the region.

For the past three years, the International Arctic Forum has been held in Arkhangelsk. This major event brings to get her scientists from across the globe to discuss issues related to the Arctic region.

Other events on the same theme are held in the city through out the year. NArFU strongly identifies with the aim of developing the North.

Its 20,000 students can study variety of courses taught at 18 institutes. The emphasis is on oil and gas engineering along with the environment, biotechnology and forestry.

The Arkhangelsk region offers a promising array of natural resources, including mineral wealt hand timber in addition to oil and gas.

But NArFU wants to teach its students how to develop the region in a way that is sustainable.

The course was launched this spring and is targeted at both Russian and foreign students, primarily Scandinavians. The first class had about 20 students.

“With this course, our aim is to offer a different view of the North by looking at it from within, by studying current problems that are in herent in the great North but that are little known,” said Polina Golomidova, head of the NArFU international students office.

What makes the new courses original is that it does not approach the Arctic from the scientific point of view. On the contrary, the initiative is directed at intellectual exploration.

Irina Kaznina, the coordinator of 'Arctic Miscellany,' explains that this multi-disciplinary program provides “a glimpse into the functioning of the indigenous societies of the Arctic on a political, economic and cultural level,” exploring such pressing issues as the challenges faced by the local people sand the consequences for them of the exploitation of Nordic natural resources.