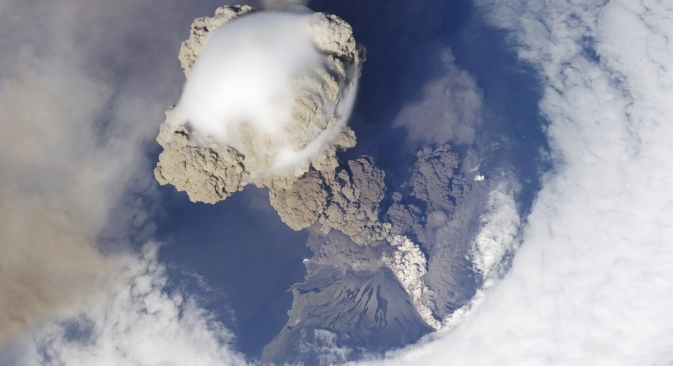 Sakhalin's Sarychev Peak is one of Russia's most active volcanoes. The most recent eruption of the volcano was recorded in 2009. Source: Lori / Legion Media

Recent studies indicate that the scale of the seismic threat in Russia is significantly underestimated.

More than 20 percent of Russian territory is prone to earthquakes with a magnitude of 7.0 or more. Earthquakes usually happen in mountainous areas, where tectonic plates grind against each other — areas including the Caucasus, Altai Region, Eastern Siberia and the Russian Far East.

Nurricanes: No Sandy in Russia

About 5 percent of Russian territory lies in areas where earthquakes can reach a very destructive 8.0-9.0 magnitude. Most of the quakes in recent decades took place on the peninsula of Kamchatka and in the Kuril Islands, often triggering tsunamis. The tsunami wave generated by the 1952 earthquake off the coast of Kamchatka completely destroyed the town of Severo-Kurilsk.

More recently, a huge earthquake in Sakhalin completely leveled the settlement of Neftegorsk in 1995.

Recent studies suggest that the scale of the seismic threat is significantly underestimated in many locations. In addition, scientists still lack a reliable way of predicting with any degree of accuracy where and when the next earthquake is going to strike. The latest example was the quake in Tyva that took place in December 2012, reaching a dangerous 7.0 magnitude.

Russia's rescue team dealing with the consequences of the earthquake in Neftegorsk, in northern Sakhalin. Source: RIA Novosti

Experts believe that, because so many parts of Russia are prone to potentially very destructive earthquakes, predicting seismic activity and using special building techniques in seismically active areas should be an important priority for the Russian government.

“There is no need for Russia to stop all development in seismically active areas,” says Arkady Granovsky, head of the seismic resilience laboratory at the Russian Center for Seismic Resilience Studies. “Countries such as China, Japan and Chile have long used earthquake-resilient building techniques to great effect.”

Engineers say buildings can reliably withstand earthquakes if they are rigid and stable enough.

Russia is currently preparing to host the 2014 Winter Olympics in Sochi. Several high-rise towers and new sports facilities are being built as part of those preparations. Yet the city lies in a seismically active zone; indeed, some areas around the city are potentially prone to earthquakes with a magnitude of up to 10.0.

Nevertheless, experts express concerns about the safety of the large number of high-rise buildings that have been erected in Russia over the past decade — the higher the building, the higher the amplitude of its swaying. It is also important for not just the frame of the building but also its piping, cabling and other systems to be strong enough to withstand an earthquake.

Any modern building is a complex engineering system. Water pipes, central heating and air conditioning systems contain large amounts of water. If these systems are damaged early during a quake, the evacuation of people from the building can become much more difficult.

Another important system that must be strong enough to withstand a quake is fire extinguishing. It is well known that fires breaking out after earthquakes can cause very serious damage. The main cause of these fires is electric cabling torn by the tremors.

The technology of erecting buildings on a seismic cushion is only just beginning to spread in Russia. The main job of these cushions is to lessen the dynamic forces at the foundation of the building. To ensure safety in seismically active areas, engineers also use special seismically resistant foundations and seismic belts, which cross-brace the outer walls.

Reading Mandelstam in the wake of Sandy

Another technique is buttresses and counterforts — vertical protrusions on the outer walls which give the building extra stability.

"We believe that residential buildings in seismically active areas should rely on light frames made of wood, as well as polymer and composite materials,” says the former minister of regional development, Oleg Govorun. “This is the approach preferred by all the developed countries. Our construction industry will have to step up its game.”

Govorun believes that introducing the latest building technologies is a particularly important priority in Siberia and the Russian Far East, where long distances and poor transport infrastructure make the traditional construction materials, which have to be brought from elsewhere, far more expensive.

Some positive examples in this area have already been set. A new industrial facility that makes composite materials for housing construction has been launched in the Sakha Republic. There is also a new plant in Khabarovsk making prefabricated frame cottages; its products have been shown to do very well in the local climate, and they are also made to withstand earthquakes.

The consequences of the devastating earthquake in the town of Neftegorsk, in northern Sakhalin, Russia's Far East. Source: ITAR-TASS

Five minutes of silence. For five minutes of every hour, all machinery clearing away the rubble after an earthquake grinds to a halt. All work – even all conversation – stops. The rescue teams and the volunteers stop to listen to the silence, in the hope of hearing any sign of survivors trapped somewhere under the rubble. The technique was first used in Russia in 1995, in the ruins of the town of Neftegorsk, in northern Sakhalin.

Seismic activity reached unprecedented levels in the Pacific in 1995. In the winter of that year, the earthquake that hit the Japanese city of Kobe killed 5,300 people. Russian seismologists were on the alert for new quakes in the Far East and on the Kamchatka peninsula. No one expected the disaster to strike Neftegorsk – partly because the north of Sakhalin had always been much less prone to earthquakes than the south or the Kuril Islands.

According to the Russian Emergencies Ministry, it was the most destructive earthquake to hit anywhere in Russia in the past 100 years, with a magnitude of 8.0–10.0 at the epicenter, which was a mere 15–18 miles away from Neftegorsk. A total of 2,100 people died under the rubble of collapsed buildings. More than 350 are missing to this day. Rescue teams found 2,364 people in the ruins, but most were beyond any medical help.

Neftegorsk was founded in 1964 as a small settlement for oil industry workers working long stints away from home. In the 30 years before disaster struck, the settlement grew to include 17 five-story apartment blocks, with 80 apartments in each building; four two-story residential buildings made of brick or concrete blocks; a single-story cottage shared by three families; four two-story nurseries; a school and several shops.

Almost all of those buildings were leveled by the earthquake. The local school held a graduation ceremony the day before the disaster. Out of the 26 graduates, only nine survived.

After the earthquake, the Russian government turned down offers of assistance from foreign rescue teams. The decision drew a lot of criticism from both within and outside the country. Nevertheless, rescue teams sent by the Russian Emergencies Ministry managed so save everyone who was not beyond saving.

It was after the Neftegorsk rescue operation that the Russian rescue teams received international recognition as some of the best in the world. Since then, whenever a disaster-struck country chooses to seek international assistance, the Russian Emergencies Ministry is usually one of the first to receive a call for help.