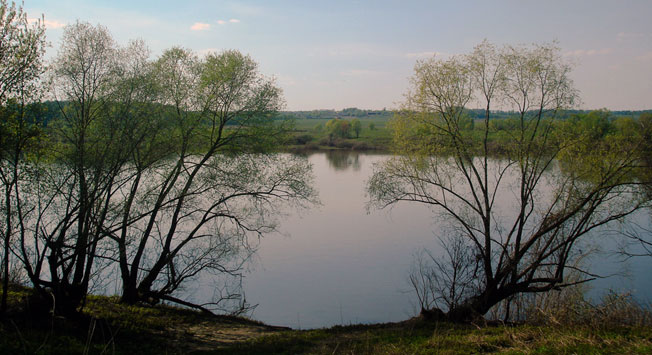 The town of Tarusa located on the Oka River, 140 kilometers from Moscow, is well-known not only because it lived through assaults by Crimean Tatars and Napoleon’s invasion, but also because it brought together many prominent residents such as painters Vassily Polenov and Viktor Borisov-Musatov, and the poetess Marina Tsvetaeva.

Tarusa is a small provincial town on the banks of the Oka River, 140 kilometers from Moscow. Though the town has lived through assaults by Crimean Tatars and Napoleon’s invasion, it’s famed not for blood-curdling battles but for its prominent residents.

The first wave of newcomers included the painters Vassily Polenov and Viktor Borisov-Musatov, and the poetess Marina Tsvetaeva. It made Tarusa the artistic oasis of the Russian countryside.

The Soviet writer Konstantin Paustovsky fell head-over-heels in love with the "depths of Tarusa," writing that he “wouldn't swap the Russian heartlands for any exalted and astonishing beauty-spots the length of the wide world!"

Tarusa's economy is based on tourism and the Oka River. Though the river provides fish year-round, it is only navigable from June 1 st  to mid-September.

Russians love Tarusa for its poetic atmosphere of bygone days, the dusk over the Oka River, with maybugs over the water, and the banks lined with eager anglers. It was in this idyllic setting that the painter Polenov produced his finest works, and the poetess Marina Tsvetaeva wrote her early verses.

You can get to Tarusa by car or bus – following the new Simferopol Highway (M2), via the town of Serpukhov. The railway mysteriously never ran to Tarusa, casting this sleepy little town into a permanent 19th century lullaby.

The poetess began visiting Tarusa from her earliest youth. The head of the family, Ivan Tsvetaev (who founded the Museum of Visual Arts in Moscow) took a dacha near to the town every summer, in the village of Pesochny. The house has not survived, leaving Tsvetaeva's own verse and prose as the only memories of her time there.

Nowadays there is a museum dedicated to Tsvetaeva in Tarusa. Among the museum's photographs there's a faded picture showing of Galya. Tsvetaeva's childhood summer friend later went on to become Salvador Dali’s artistic muse, wife and inspiration.

Tarusa is still rich in notable residents. On Schmidt Street you may catch sight of the private museum of Sergey Zharov. He's a local artist who produces sculptures and designer home interior items from old car engines, gearboxes, and exhaust pipes.

Or how about a chair made from a Singer sewing-machine? Light-fittings made from old taps brighten this unusual house, filled with old records of Chaliapin’s songs and antique irons – along with much else besides.

“Officially, I'm a carpenter, and that's how I earn my money,” says Zharov. “It leaves me enough to support my hobby, and almost every weekend I'm off to Moscow to scour out some new antiques."

"I could have moved to Moscow years ago, but I didn't fancy it. My parents and my granddad lived here – it's home. There's a special Russian quality to the wonderful landscapes here, it’s the only place that inspires me,” Zharov said.

Things have barely changed in Tarusa over the last two centuries. They still manufacture linen clothing at the same old workshops, and local potters still make items from the black clay they've been using for 200 years.

The townsfolk are still just as communicative, amiable and hospitable. And roads in Tarusa are still as bad as they were two centuries ago...

Off to Polenovo in search of inspiration

It pays to take heed of the woeful condition of Russian roads when planning any visit to the manor estate at Polenovo – on the other bank of the Oka River, close to the village of Bekhovo. The place is worth visiting, if only for the lush beauty of the river views.

The best access to Polenovo is by river – by boat or ferry. The journey there and back takes around an hour. However, outside the river's navigable season car or bus are the only options. To avoid getting stuck in the sandy bogs of the backroads along the river, approach Polenovo from the south – via Serpukhov, along the Simferopol Highway.

The estate was laid out personally by the renowned Russian painter Vassily Polenov, to inspire his future landscapes. He also designed the great house (a sunlit manor house with huge windows), "the Abbey" (a studio in Gothic style), as well as the pine forest and the garden surrounding them.

Within the house is a rich collection of paintings by Polenov himself and his circle of artistic friends and colleagues – Repin, Vasnetsov, Kramskoy and Shishkin. The present-day owners continue the traditions of their ancestor. The manor still hosts orchestral concerts and master-classes in pottery and wood-carving.

In the neighboring village of Bekhovo, on a bluff known as the "love cliff," there's a simple local graveyard, where Vassily Polenov lies buried among his family. Opposite the cemetery is the toy-like Trinity Church – built to designs made by the artist. The view of the river from atop the bell-tower will take your breath away and inspire your soul.