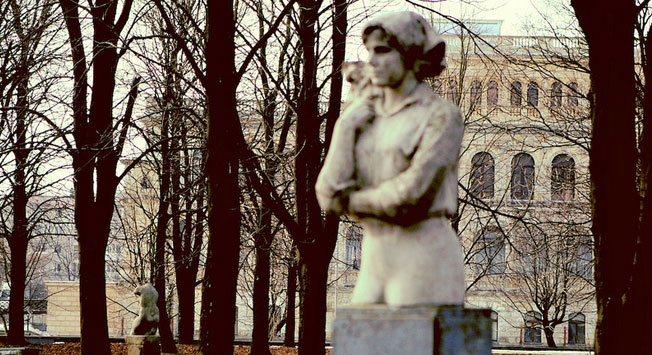 Kaliningrad is the most western of all Russian cities. It used to be part of Prussia, Poland, Germany and was consequently absorbed by the USSR and Russia. It is here that famous thinker Immanuel Kant spent his life and wrote the Critique of Pure Reason.

The Kaliningrad region, on the shores of the Baltic Sea, is the westernmost point in Russia. It is a Russian enclave in the heart of Europe, with no land connection to the rest of the country. It borders with Poland in the South, and with Lithuania in the North and in the East.

Kaliningrad was integrated into the Soviet Union and, subsequently, into the Russian Federation, quite recently, in 1946. Before then, it was part of Prussia, Poland, and Germany. It was located at the crossroads of a multiplicity of cultures.

There is no shelter in Kaliningrad from the fierce wind blowing from the Baltic Sea. The Pregel river is crossed by fifteen bridges. They are referred to in an ancient math problem. It goes like this: is it possible to cross seven of the Königsberg bridges making sure not to cross any of them twice?

Three hundred years ago Immanuel Kant, “the great Chinese from Königsberg,” as Nietzsche used to call him, often spent his time on the banks of the Pregel river. The philosopher loved to look at the dockyard and at the river walk on the road to Holländer Baum, where he wandered every day after lunch.

He lived in Königsberg his whole life, until he died, aged 80. His grave is in Königsberg’s Cathedral, on Kant’s island. He was the last person to be buried in the “Professors’ crypt.”

During his life in Königsberg, the “Prussian hermit” wrote the  Critique of Pure Reason  and demonstrated the fallacy of the three philosophical proofs of God’s existence: the ontological, the cosmological and the physico-theological proofs.

After his death, theologians took their revenge on him, by declaring that Kant invented the moral proof of God’s existence. Immanuel Kant claimed that “in purely moral terms, it is worth admitting God’s existence.”

For him, the essence of religion lied in “becoming aware of our duties as God’s commandments.” In the books currently used in seminaries, you can still find the four proofs of God’s existence, with Kant described as the author of the moral proof.

With a note of irony and caricature, this detail is also reported in Mikhail Bulgakov’s  Master and Margarita.  As Woland says: “The old Immanuel roundly demolished all five proofs, and then, as if mocking himself, constructed a sixth of his own.”

Kant also lectured and was the rector of the Albertina University in Königsberg, later renamed Federal Immanuel Kant University of the Baltic, the oldest Prussian university and the first university in Russia. Kant taught logic, mechanics, physics, metaphysics, geography and mathematics.

“Two things send a sacred quiver through my soul: the starry sky above my head and the moral law within us.” The city is full of plates with famous quotations by Kant. The starry sky became a success story for the Albertina University soon after the philosopher’s death.

At the start of the nineteenth century, the university’s observatory became one of the most important centers of astronomy in the world.

Kaliningrad was originally called Königsberg (in German, “king’s hill”). It was founded in 1255 by Teutonic Knights. Over a period of 758 years, it welcomed German colonizers and Teutonic Knights, to

become the capital of the Prussian Principality.

Under Nazi Germany, the city took part in the persecutions against the Jews. It was severely bombed during the “revenge” military operation.

It fought against the advancement of the Soviets, protecting its fortresses, and it lamented the loss of the Royal Castle. As the story goes, the castle’s vaults were home to the famous amber room of the Russian emperors.

To this day, Kaliningrad is a melting pot where Germans, Greeks, Armenians, Poles, Russians and Lithuanians live side by side. Foreigners deported from the region after its inclusion in the Soviet Union, often come back to Kaliningrad-Königsberg and to their native towns.

They wander around the old buildings, the cemeteries, and German castles, recalling the old names of familiar places.

The state program for the restoration of historic and cultural monuments is supported by the local population. People buy churches and castles close to the places where they spent their childhood that have a special meaning to them.

They restore them and then open them up to visitors as museums or cultural centers. In spring and summer, local historic clubs organize dramatizations of the battles fought in this area by the Teutonic Knights.

The Courland Gulf is separated from the Baltic Sea by the Courland Isthmus, a narrow strip of land. They are filled with fragments of ancient history, sunk ships covered with silt and seaweed.

From the Gulf’s depths emanates an immense and powerful energy, like the rays of the rising sun, admired in the early hours of the morning by Immanuel Kant, the philosopher who demolished the proofs of God’s existence.