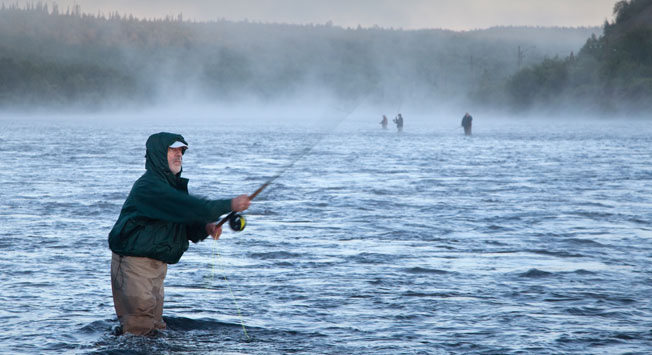 RBTH gets out our spinning rods and completes a ranking of the best places for trophy fishing in the summer.

A Boeing 767 is often seen arriving at Murmansk airport on a charter flight from London. It is frequently accompanied by the private planes of businessmen and crowned heads – they are flying to the Kola Peninsula to visit the “Rise of Communism” collective farm… for some fishing.

Svyatoslav Kalyuzhin, the chairman of the collective farm, lists off the names and titles of his guests like a mantra: “Eric Clapton, King Harald V of Norway, King Carl XVI Gustaf of Sweden, several dozen Russian government ministers…”

The first foreigner to discover the salmon fishing in Russia was the media magnate Ted Turner. Back in 1994, he went fishing with the actress Jane Fonda on the River Ponoy in Murmansk Region.

In subsequent years, Turner was followed by Boris Yeltsin (the first President of Russia), the kings of Sweden and Norway, the singer Eric Clapton, Prince Charles of Wales and President Putin.

The latter said in an interview with the American magazine Outdoor Life that, “the best fishing in the world – according to my personal rating – is in Murmansk Region and in the River Volga delta, in the region of Astrakhan…”

Yet the Kola Peninsula is not the only hot spot for fishing enthusiasts (of whom there are 15 million in Russia). You can fish in Russia’s rivers and lakes all year round. One RBTH journalist got out her spinning rods and compiled a ranking of the best places for trophy fishing in the summer.

The prospect of some fantastic fishing attracts lots of tourists to the Kola Peninsula: This area has a total of 82 rivers, all rich in salmon. The beautiful Scandinavian environment, the accessibility of the infrastructure and, of course, the trophy fish make the Kola Peninsula a dream come true for lovers of fishing.

The trophy: The most common trophy on the Kola Peninsula is salmon weighing more than 66 pounds. The wild Atlantic salmon stocks on the peninsula are some of the richest in the world. People also catch cod, trout, grayling, whitefish and Arctic char here.

How to get there: Take a plane to Murmansk, and then go by bus to Umba. From Umba a string of seaside villages stretches along the coast, and here you can stop for the night and find guides. If you do not speak Russian, though, it’s better to book a tour. Incidentally, the cost of VIP tours to the Kola Peninsula, which are so popular with foreign celebrities, can be up to €7,000 ($9,282) per person per week.

Important things to know: On the peninsula’s southern coast – the Tersky Coast – there are fewer salmon rivers, but this region is more suitable for recreational fishing. The fishing on the north coast of the peninsula is mostly “wild” fishing, in difficult climatic conditions and with no infrastructure.

Seliger is a very big and beautiful system of lakes with a total area of 96.5 square miles. The lakes are linked by channels. There are holiday centers and sanatoriums on the shores of these lakes, where you can find comfortable accommodation.

How to get there: You can get from Moscow to Seliger by train from the Leningradsky Station, heading north via Ostashkov Station – there are tourist centers 2.5 miles from the town, where you can spend your holiday in Seliger. There is no need to find a guide, but you can book a tour if you wish.

When to go: You should go to Seliger starting anytime from the middle of July, when the water in the lake gets warm. During this time, you can go swimming, while the blueberries are ripening in the forest and the first mushrooms are appearing.

Important things to know: Seliger covers an area of 96.5 square miles, and, if you want a big catch, you have to know the area well. You can find good fishing in Seliger on the Kravotynsky stretch and in the channels linking the Berezovsky stretch with the Ostashkovsky stretch.

Lovers of pike perch and bass are recommended to fish for them in the deep waters of the Sosensky stretch. The fishing is just as attractive in the bays and lakes on Khachin Island. The best way to move around Seliger is by boat ($9 per day).

The most popular place for fishing in Russia is the Lower Volga. Fish weighing 6.6–11 pounds are called “small fry” here, and the infrastructure for fishing is probably one of the most developed in Russia. You can catch fish here with a net, or even with your hands.

The trophy: Two-hundred-twenty-pound catfish and carp, pike perch and pike, asp and tench, bream and Caspian roach, sea roach and sabrefish, bass and buffalo fish are the trophy fish here. Carp can be caught on the Volga with bottom tackle or boils, right up until autumn. One of the most popular things here is to fish for pike perch: with a jig and a vertical spoon-bait in the spring, and with trolling and bottom tackle in the summer.

How to get there: Take a plane or riverboat to Astrakhan, and book a tour on the spot (or via the Internet) – including transport to the places with the best fishing. The River Akhtuba is considered one of the best places: This is the left branch of the Volga, which splits off opposite Volgograd. The river is up to 656 feet wide, and, in places, 984 feet. The Akhtuba is good for carp, catfish, pike perch and pike. To get here, you have to fly to Volgograd, and, from there, take the bus to the town of Volzhsky.

When to go: The best time for fishing on the Lower Volga begins in the second half of March and lasts until the end of April. Daytime temperatures get as high as 68–77 degrees Fahrenheit.

Important things to know : Make a careful study of the area you are going to fish. The Lower Volga is an impressively big region, and different types of fish are caught in different parts of it. The parts where major channels link with the Volga (and which, in turn, are joined by smaller branches) are very promising.

The changeable weather in these areas also makes it important to select your place carefully. Astrakhan Region is quite a windy place, and it is a good idea to have an “escape route” planned, in case going out in a boat on the stormy Volga gets dangerous.

It is more interesting to fish in Russia’s more inaccessible rivers: Here you can combine your favorite pastime with hunting and with active types of leisure. If you travel to Salekhard (the Arctic Urals) via Vorkuta, you can find numerous places for fishing in the upper reaches of tributaries of the River Ob.

The trophy : There are lots of good fish in the rivers of Siberia and the Urals: pike and bass weighing 17.6–19.8 pounds and, also, salmon, trout and whitefish. However, it is quite another type of fish that draws true fishermen here – grayling. In the area within the Arctic Circle, the grayling reaches record weights by Russian standards – up to 6.6 pounds.

How to get there : You will need a local guide, but finding a guide in Salekhard is not a simple matter. Option two is to go to a travel agency or make personal contact with local anglers via the Fion.ru website.

When to go : It is best to fish for grayling in late spring, when the spring floods are flowing and the water becomes clear.

Important things to know : If you go to a travel agent, you need to know which locals their business is linked to. A hunter who is not an angler (but simply a taxi driver, for example) is useless, because you will not catch a trophy fish with such a guide. And remember: Siberia is famous for its bloodsuckers. In the spring, you can protect yourself from the insects with various ointments, but, in the summer, you will need mosquito nets and you will have to choose your clothing wisely.

Baikal is the deepest lake in the world – the “heart of Siberia” – with the purest water and an infinite variety of flora and fauna. This is home to the only red fish in Siberia – the Davatchan char – and also to grayling, the Baikal bass and numerous other rare trophy specimens.

The trophy: On Lake Baikal you can catch black and white grayling (11 pounds), Arctic cisco, pike and perch (6.6 pounds). It is permitted to catch whitefish, ide, bream and freshwater cod with a net.

How to get there: Take a plane to Irkutsk or Ulan-Ude , then go by bus or taxi to one of the Baikal tourist centers. It is also possible to book a special tour.

Important things to know: If you are looking to get enjoyment mainly from fishing and want to save time, you can start your trip at the Lesser Sea. This part of the lake is named as such because it is divided from Baikal (the Greater Sea) by Olkhon Island and is in the middle part of the lake.

In the northern part of this island you can start by fishing for grayling and Arctic cisco, if the latter has already risen to the upper layers of the warmed water.

You can fish for grayling in all kinds of ways, from fly-fishing to trolling. The most exciting and productive method, though, is to fish “from under the propeller.”

This method, which was invented by local fishermen, is based on creating an artificial current with the boat, which is positioned with its nose to the shore and with the engine running at slow speed.